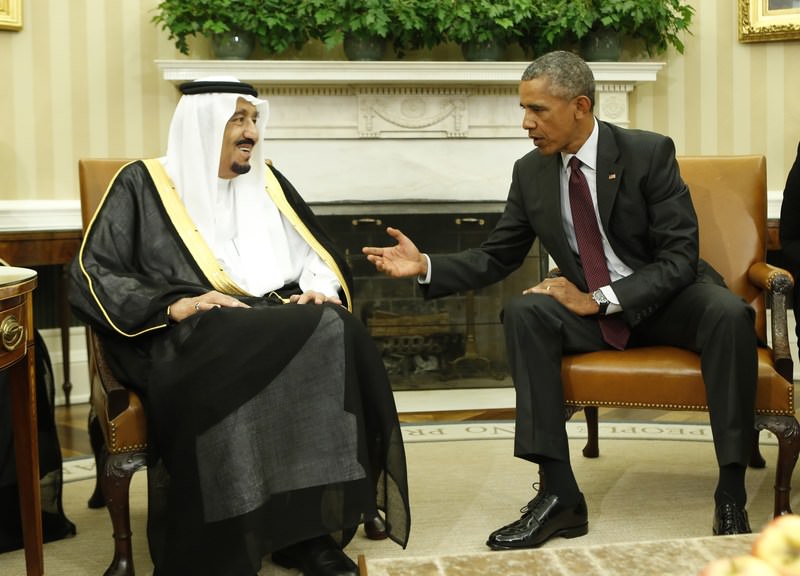 by Associated Press Sep 04, 2015 12:00 am
Hosting Saudi Arabia's new monarch for the first time, President Barack Obama said Friday that the U.S. shares King Salman's desire for an inclusive government in Yemen that can relieve that impoverished Arab country's humanitarian crisis. Their talks also addressed the Iran nuclear deal, a source of lingering tension in the U.S.-Saudi relationship.

Since March, the U.S. has been supporting a Saudi-led intervention against Yemen's Iran-aided Shiite rebels, who have chased the country's U.S.-recognized president into exile. But the Obama administration is concerned about the conflict's rising death toll that is now in the thousands, while aid groups lament their inability to provide life-saving support to all Yemenis in need.

"We share concerns about Yemen and the need to restore a function government that is inclusive and that can relieve the humanitarian situation there," Obama told reporters who were allowed into the Oval Office for brief comments from both leaders. The meeting, Obama noted, was taking place at a "challenging time in world affairs, particularly in the Middle East."

On Friday, 22 members of the United Arab Emirates' military were killed while fighting the rebels known as the Houthis, the official news agency WAM said. It was believed to be the country's highest number of military casualties since its founding in 1971. Pro-government Yemeni security officials said the troops were killed when a Houthi missile hit a weapons storage depot.

Beyond Yemen, Saudi Arabia wants the U.S. to increase support for Syrian rebels fighting the Islamic State and seeking to topple President Bashar Assad's embattled government after four-and-a-half years of civil war. And the Saudis want assurances from the U.S. that the Iran nuclear deal comes with a broader effort to counter Iran's destabilizing activities in the region.

Four years after Obama demanded Assad's ouster, the Syrian leader remains in power through significant help from Iran. The U.S. has largely abandoned efforts to uproot the Iranian-backed militia Hezbollah from its dominant position in Lebanon. Washington has struggled to limit Tehran's influence in Shiite-dominated Iraq. Despite the Saudi intervention in Yemen, the Houthis maintain their hold over much of the country.

The visit of King Salman, who ascended the throne in January, is forcing the administration to address these concerns. Secretary of State John Kerry said this week that the U.S was working with its Arab allies in the Persian Gulf on a ballistic missile defense system, special operations training and large-scale military exercises.

The Iran nuclear deal will provide Iran hundreds of billions of dollars in relief from international sanctions in exchange for a decade of constraints on the country's nuclear program. Congress will soon consider a resolution of disapproval of the final package reached in July, but Senate Democrats have enough votes to prevent the Republican-led measure's success.

King Salman, in brief remarks through an interpreter, characterized his visit as symbolic of the deep ties between the allies.

"I'm happy to come to a friendly country to meet a friend," he said. "We want to work together for world peace."

Ben Rhodes, a deputy national security adviser, said Iran is in such a deep economic hole that the government will likely use much of its initial windfall to boost the economy. The defense budget of U.S. allies in the Gulf is eight times that of Iran and no amount of sanctions relief can close that gap, he said.
Last Update: Sep 04, 2015 8:57 pm
RELATED TOPICS