France prepares for anti-ISIS strikes in Syria with reconnaissance flights 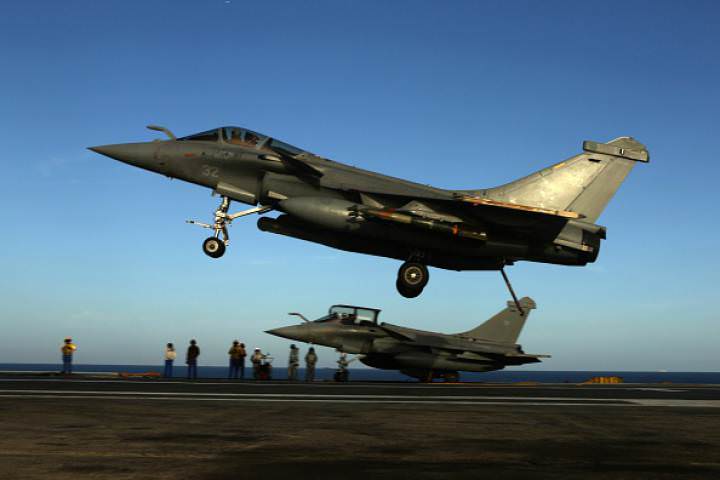 by Anadolu Agency Sep 07, 2015 12:00 am
France will begin reconnaissance flights over Syria starting from Tuesday as preparation for possible airstrikes against the terrorist group ISIS.

"It is from Syria -- we have proof of this -- that attacks have been organized against several countries, including France," Hollande said.

Speaking on Monday at his biannual press conference, French president Francois Hollande said he has given the green light for French warplanes to fly reconnaissance missions over Syria and that these could lead to France carrying out airstrikes against ISIS targets there.

"For now, we will locate the command and intelligence centers of ISIS in Syria," Hollande said.

"I told the defense minister that reconnaissance flights should be carried out over Syria. Then, according to the information and the intelligence we get from the reconnaissance, we will be ready to carry out strikes," Hollande told reporters.

The newly-authorized French flights over Syria would not be under the command of the coalition, but would be "autonomous", Hollande said.

But the French president ruled out sending ground troops to fight ISIS in Syria or Iraq, saying it would be "unrealistic" because "we would be alone and inconsequential".

France has since August 2014 been part of the U.S.-led international coalition against ISIS, but, until now, has limited its airstrikes to targets only in Iraq.

Asked about the Syrian president Bashar al-Assad, the French leader said that "the political transition in Syria requires his departure." Hollande has repeatedly called for Assad's removal from early on after the civil war in Syria began.

"Bashar al-Assad has attacked his own people and used chemical weapons. The political transition requires his departure. He has refused any dialogue. Any solution cannot permit his remaining in power," Hollande added.
Last Update: Sep 07, 2015 3:34 pm
RELATED TOPICS