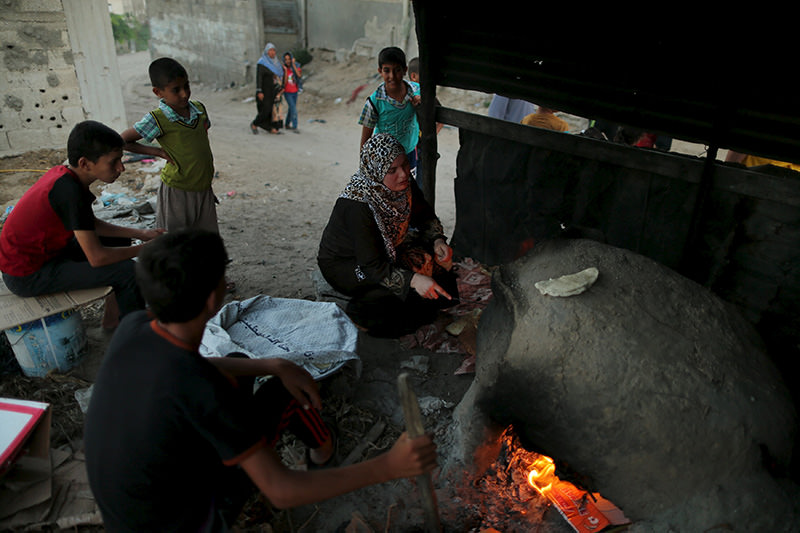 Palestinians bake bread on a clay oven in Beit Lahiya town in the northern Gaza Strip August 25, 2015 (Reuters Photo)
by Anadolu Agency Sep 08, 2015 12:00 am
Palestinian families are afraid of what the future holds, after their houses were destroyed last year in Israel's summer offensive against the Gaza Strip.

Since the war ended in August 2014, the Abu Shabab family have lived in a shanty house in a Bedouin estate called Beit Hanoun in the north of the strip.

The family have attempted a number of times to get financial compensation to rebuild their house, which was destroyed by an Israeli airstrike.

They failed, and have now had to build their new shanty house from sheets of tin that cannot protect them from stray animals, reptiles and insects.

The stifling summer heat saddles the family with yet more misery.

They describe their house as "unsuitable for human living". It consists of just one narrow room and a water and electricity supply that cut out constantly.

Rania Abu Shabab, the homeowner, complains that she is in the final stages of her pregnancy and has constant pain in her stomach that are not helped by the unhealthy conditions she is living in.

Samira Khaled, her mother-in-law, told Anadolu Agency: "We endure this hard life but we also we suffer from marginalization by the government."

Akram Hamid, 45, was forced to build his new house from tin and palm branches. It overlooks a 4-5 meter deep hole where his used to stand before it was struck by Israeli fighter jets.

"Rockets targeted our house and destroyed it almost completely. It caused a deep hole that we cannot fill," he told Anadolu Agency.

Hamid's house consists of two rooms separated by a sheet of tin. His eight family members live with him in difficult conditions.

A year after Israel's war on the besieged enclave, Hamid worries about continuing his life inside his shanty house, which says is not suitable for human living.

Israel launched a war against the Gaza Strip on July 7, 2014. It resulted in the deaths of more than 2,000 Palestinians and injured another 11,000, according the Palestinian Ministry of Health.