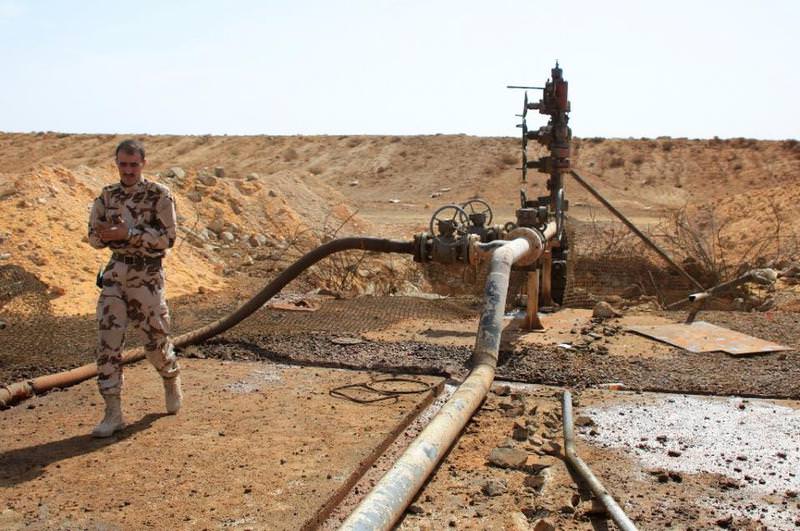 A member of the Syrian army inspects the Jazal oil field after fierce battles with ISIS.
by Daily Sabah Sep 09, 2015 12:00 am

After capturing the main oil fields in both Syria and Iraq, which have become the main financial supply for the group, ISIS is battling with troops loyal to the Syrian regime to capture the last major oil field in Syria

The Syrian Observatory for Human Rights said the Jazal oil field near the ancient city of Palmyra had fallen to ISIS. The Jazal oil field was the last oil field that remained in state control, the rights group reported. ISIS captured Palmyra from the Assad regime last May. The Observatory also said clashes continued in the Jazal oil field and the surrounding area. The facility has been shut down after the regime evacuated employees. U.S.-led coalition bombing in areas in Raqqa had killed at least 16 militants, including five foreign militants, the observatory reported. Jazal is a medium-sized field located in the north-west of the rebel-held ancient city of Palmyra, close to a region that holds Syria's main natural gas fields and multimillion-dollar extraction facilities.

ISIS militants control many of Syria's oil fields that are mostly in the eastern region bordering Iraq. Exporting oil from oil fields captured by ISIS militants has brought in tens of millions of dollars for the group. The U.S. Treasury Department estimated that ISIS earns $1 million a day from the export of oil. Dubai-based Institute for Near East and Gulf Military Analysis (INEGMA) said that ISIS earns $3 million per day from oil revenue in Iraq and Syria.

According to the U.S. Treasury Department, in 2014, ISIS militants controlled around 300 oil wells in Iraq alone. At its peak, it operated 350 oil wells in Iraq, but lost 45 to foreign airstrikes. ISIS militants had captured 60 percent of Syria's total production capacity. About one fifth of its total capacity had been in operation. ISIS earned $2.5 million a day by selling 50,000-60,000 barrels of oil daily in 2014, U.S. officials said.

In April, after the fall of the strategic northern city of Tikrit, ISIS apparently lost control of three large oil fields, including Himrin and Ajeel oil fields, which will have significantly degraded its ability to generate income from selling oil. ISIS also captured the northern Qayara oil field, which has a total output capacity of around just 2,000 barrels a day.

According to an official in Iraq's state-run North Oil Company, oil fields might produce 400,000 to 500,000 barrels of oil a day, before the ISIS militants took control. According to the company, 25,350 barrels of crude oil a day were going to northern Iraq, from there the oil vanished into Turkey and Iran.

According to the International Energy Agency (IEA), Iraq is pumping faster than it ever has. Iraq's oil production hit an all-time high last June at 4.1 million barrels of oil per day, the IEA said. Iraq has suffered heavily from the global decline in oil prices. A year ago, the Iraqi government pulled in about $300 million per day in revenue. Now it's down to roughly $240 million a day, the IEA reported. According to the IEA report, ISIS militants control about 10 percent of Iraq's oil fields. However, ISIS has to sell its oil at a discount because it must go to the black market for buyers. The Kurdish Regional Government, which controls some oil production in northern Iraq, is trading less oil with the national government over payment disputes. With ISIS claiming more oil fields, Iraqi officials are planning budget cuts, which will curtail oil production later this year.

The Arab uprisings that euphorically swept across the Middle East and North Africa, attracted Syrians who had lived under the dictatorship of the Assad family since 1971, when current President Bashar Assad's father, Hafez, seized power. Since then the population was forced to live in a police state that tried to control every movement, organization or business through the use of a wide-ranging intelligence service. In March 2011, Syrians were emboldened enough to raise their voices against the dictatorship. However, the regime's response was not as peaceful as the protests. And the country was subsequently dragged into a deadly civil war after opposition groups took up arms against the government. Opposition groups have also been divided internally. While moderate opposition groups like the Western-backed Free Syrian Army (FSA) are struggling for a democratic Syria where all religions and political groups are free to exist, radical elements like al-Nusra Front and ISIS aim to establish a new Syria ruled by extremist religious jurisprudence. The four-year-long war has cost the lives of more than 250,000 people and displaced millions that led to an unprecedented refugee crisis.
RELATED TOPICS