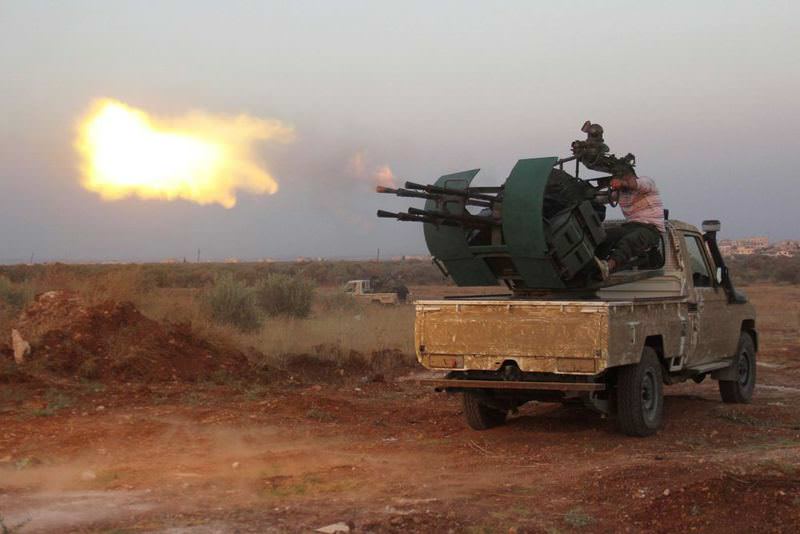 The operation, launched by opposition groups, resulted in the capture of the major air base.
by Daily Sabah Sep 10, 2015 12:00 am

Syrian opposition groups who made significant advances in Idlib in the past few months have captured a major air base from government forces. Since the air base was the last stronghold of the Assad regime in Idlib, rebels have seized full control in the strategically important province

Troops, loyal to the Syrian regime have evacuated a major air base after fierce battles with opposition groups. The rebel groups that were unified under al-Qaida's Syrian branch Al-Nusra Front in Idlib operation, have captured the full control of the strategically important province.

The capture of the air base will decrease the frequency and number of airstrikes, carried out by the regime costing dozens of lives every day. Syrian state television said the army garrison that had defended the Abu al-Duhur military airport had evacuated the base.

Rami Abdulrahman of the Syrian Observatory for Human Rights monitoring group said no Syrian troops are present in Idlib anymore but there are some local militias to defend two Shiite villages.

Last March the opposition groups under the umbrella of the Fatah Army captured the city center of Idlib, which was hailed as a huge gain against the Assad regime in Syria. The rebels have proudly declared they seized control over the city and released several videos showing the people of the city saluting the fighters and thanking them for expelling the regime forces. Syrian President Bashar Assad, whose forces hold positions in Latakia, Damascus and some parts of Aleppo was, as understood from his statements, frustrated at the loss and accused Turkey of facilitating the fall of Idlib into the hands of the opposition groups, although the regime forces since the beginning of the war in 2011 have lost large amounts of territory. The opposition sympathizers on social media claim that the regime faces its worst days since 2011 and is "anxious." Consequently it has become more aggressive as barrel bombs had started to fall more frequently and the prisoners held by the regime forces have been executed before the rebels' capture.

In response to the rebels' advance, the regime has intensified its air raids on the rebel-held areas. Moreover, opposition groups claimed that the regime once again used chemical weapons in Idlib province as it did before. The Arab uprisings, which euphorically swept across the Middle East and North Africa several years ago, appealed to Syrians who had lived under the dictatorship of the Assad family since 1970, when Bashar's father Hafiz Assad seized power. Since then the majority Sunnis were forced to live in a police state that tried to control every movement, organization and business through the use of a wide-ranging intelligence service. In March of 2011, Syrians were emboldened enough to raise their voices against the dictatorship. However, the regime's response was not as peaceful as the protests. And the country was subsequently dragged into a deadly civil war after opposition groups took up arms against the government. The Syrian civil war has now entered its fifth year and has caused the death of more than 200,000 people and at least 60,000 are missing. The war also displaced nearly 10 million people. While the international and regional powers continue endless discussions, the regime does not just use conventional weapons but also chemical weapons. About 13.6 million people, equivalent to the population of London, have been displaced by conflicts in Syria and Iraq, many without food or shelter as winter starts, the U.N. refugee agency revealed. The 13.6 million include 7.2 million displaced within Syria – an increase from a long-held U.N. estimate of 6.5 million, as well as 3.3 million Syrian refugees abroad, 1.9 million displaced in Iraq and 190,000 who have left to seek safety. The vast majority of Syrian refugees have gone to Lebanon, Jordan, Iraq and Turkey. Western countries have been frequently criticized by aid agencies and the U.N. for not opening their borders to the Syrian refugees as the most developed countries have received the least number of refugees.
RELATED TOPICS