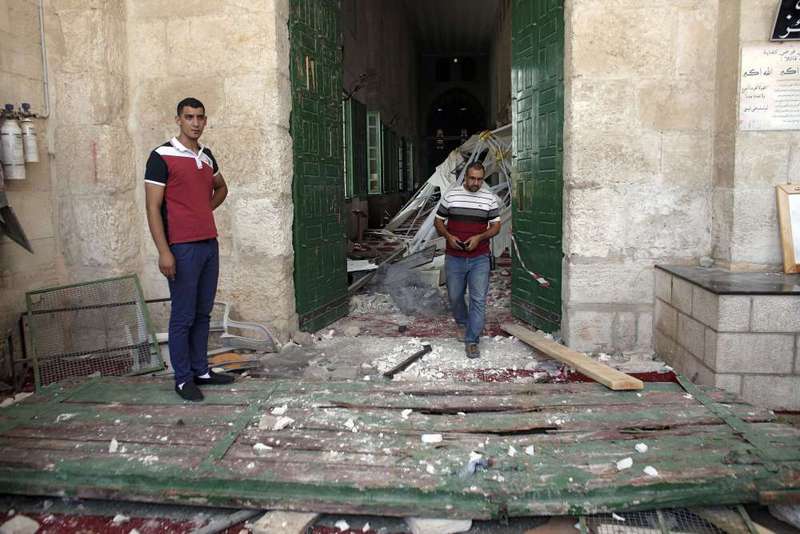 Israeli forces stormed Al-Aqsa Mosque for the third day as clashes erupted after an extremist Jewish group attempted to enter the compound. Witnesses said at least one year is needed to repair the damage, as both the mosque and gates were vandalized

Dozens of Israeli forces on Tuesday stormed the occupied East Jerusalem's flashpoint Al-Aqsa Mosque compound and attacked Muslim worshipers, for the third day in a row. Eyewitnesses told Anadolu Agency that Israeli forces fired tear gas, stun grenades and rubber bullets at worshipers near the compound's iconic Al-Aqsa Mosque and Al-Qibali Mosque. "At least 120 Israeli special forces and police officers stormed the compound and attacked Muslim worshipers," one eyewitness said. "Israeli forces went up to the roof of Al-Qibali Mosque, destroyed its historical gates and fired rubber bullets and gas bombs inside the building," Omar al-Qiswani, Al-Aqsa Mosque's director, said. "They entered the mosque with their military boots and arrested a Palestinian youth after beating him." Al-Qiswani said the mosque has been destroyed from inside because of the repeated attacks and it would take at least one year to repair it. Witnesses said Israeli forces sealed the gates of Al-Aqsa Mosque and barred men and women of all ages from entering.

Israeli police spokeswoman Luba Samri said police entered the Al-Aqsa mosque compound early Tuesday morning to disperse a group of protesters who had gathered up inside the mosque overnight. The protesters threw rocks, fireworks, concrete blocks and a firebomb at officers, she said, adding that two Palestinians were arrested and five police officers were slightly injured. She said that a firebomb thrown at police from within the mosque ignited a rug and planks of wood stockpiled by the protesters. Mosque officials later extinguished the fire, she said. Police released photos showing piles of charred rubble outside the mosque. Police later managed to restore calm and open the site for visitors, Samri said, but a group of protesters remained inside the mosque.

The United States and U.N. Secretary-General Ban Ki-moon both said they are concerned about the violence at the site, revered by Muslims as the Noble Sanctuary and by Jews as the Temple Mount. Addressing the issue Monday, State Department spokesman John Kirby also expressed his concerns and condemned the violence around the al-Aqsa Mosque. "The United States is deeply concerned by the recent violence and escalating tensions surrounding the Haram al-Sharif, Temple Mount. We strongly condemn all acts of violence," Kirby said using the names attributed to the area by Arabs and Israelis, respectively. He urged all sides to refrain from provocative actions and keep the "unchanged historic status quo on the Haram al-Sharif Temple Mount." King Abdullah from neighboring Jordan said the Israeli actions were provocative and could imperil ties between the countries, state media reported on Tuesday and Palestinian President Mahmoud Abbas condemned Israel's actions. Jordan's Hashemite dynasty derives part of its legitimacy from its traditional custodianship of the holy site. Jordan and Israel signed a peace treaty in 1994. "If this continues to happen ... Jordan will have no choice but to take action," King Abdullah was quoted as saying without elaborating. Palestinian Presidency Spokesperson Nabil Abu Rdeinah said Abbas and King Abdullah had discussed the events by phone. Israeli Prime Minister Benjamin Netanyahu was due to hold an emergency ministerial meeting late on Tuesday, called after an Israeli motorist died in a crash police said was caused by suspected stone-throwing.

Hamas leader Khaled Meshal on Monday briefed Turkey's president about clashes between Palestinians and Israeli security forces at Al-Aqsa Mosque, a presidency source said. Recep Tayyip Erdoğan met Meshal, the group's political chief, after violence erupted Sunday and continued into Monday at the site in east Jerusalem, which is revered by Jews and Muslims. Erdoğan strongly condemned the violence, which left dozens injured, the source said on customary condition of anonymity. During the meeting in Ankara, Meshal thanked Erdoğan for his sensitivity and support. Presidential spokesman İbrahim Kalın on Tuesday said that "Israeli troops who have prevented Muslims from entering the compound injured dozens and caused clashes. We know what is aimed with this action. Israeli administration's goal is to allocate the use of the compound for both Jews and Muslims which is similar to the practice in Abraham Mosque in Al-Khalil city. In this way, Israel wants to justify the Jewish extremists' entrance to the compound. We condemn that Israeli troops put their dirty boots on the clean and holy lands and carpets of Al-Aqsa Mosque."