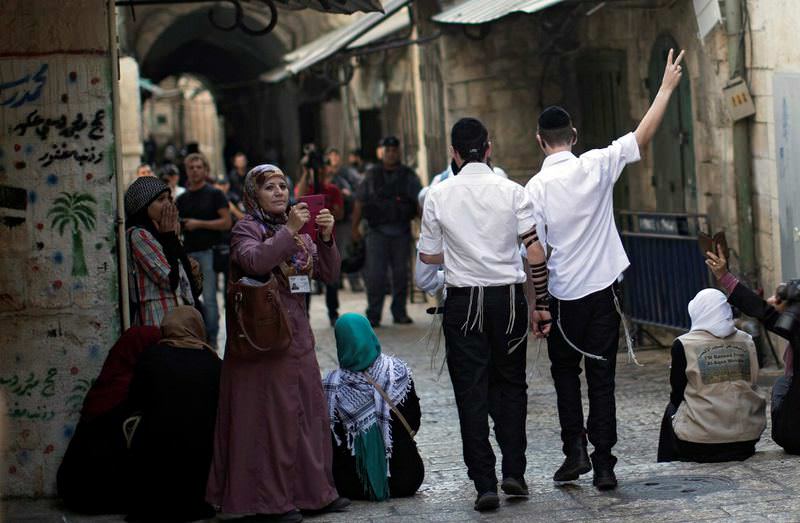 Two Jewish extremists making a V sign while passing in front of Palestinians in Old Jerusalem.
by Daily Sabah with Wires Sep 17, 2015 12:00 am

Tension has decreased in Jerusalem due to the Jewish new year although some Jewish extremists insisted on entering the Al-Aqsa compound. The U.N. Mideast envoy warned the clashes are dangerous for the future

The U.N.'s Mideast envoy warned Tuesday that clashes between Israelis and Palestinians in and around Jerusalem's holy sites have the potential to ignite violence well beyond the walls of its old city, pointing to "a vicious tide of terror and extremism" in the region. Nikolay Mladenov urged all parties to refrain from "provocative actions and rhetoric" and called on political, community and religious leaders to ensure that visitors and worshippers "demonstrate restraint and respect for the sanctity of the area." He told the U.N. Security Council by video link Tuesday that the clashes followed "sweeping restrictions" that Israel imposed on entry to Jerusalem's most sensitive holy site, the Al-Aqsa mosque compound, on Aug. 26. Since then, he said, Israel has banned members of Muslim and Jewish groups considered to be extremist.

"These latest incidents have echoed widely and have been condemned across the Muslim world and beyond," Mladenov said. "It is imperative that the historic status quo is preserved" in line with agreements between Israel and Jordan's King Abdullah II, who is custodian of the Muslim holy sites in Jerusalem, he said. Mladenov noted that Israel's Prime Minister Benjamin Netanyahu has said his government "will use all means to maintain the status quo and law and order on the compound." Against this backdrop, Mladenov said, "frustration, fear and violence have continued to spiral, undermining belief in finding a way out of the impasse." He said "bold, concrete actions" are needed on the ground, in the region and internationally to reach a two-state solution. This must include "significant policy shifts by Israel" and "an unflinching commitment on the Palestinian side to achieving genuine national unity," he said. Mladenov said the Quartet of Mideast mediators the U.N., U.S., European Union and Russia and key Arab nations will meet Sept. 30 on the sidelines of the General Assembly's annual ministerial meeting to discuss how to link regional and international efforts to create conditions for a return to "meaningful negotiations."

Riyad Mansour, the Palestinian U.N. ambassador, told reporters the Palestinians want a time frame for talks and ending Israel's occupation. He ruled out the previous practice of U.S.-brokered negotiations with Israel, saying a larger group will have "better atmosphere for increasing the chance for success." He pointed to the six-party talks that led to the Iran nuclear deal and the collective process that has tried, so far unsuccessfully, to get the government and rebels in Syria to peace negotiations in Geneva as examples. Mansour called the situation at the holy sites in Jerusalem "extremely dangerous," accusing Israeli extremists of trying to have a Jewish presence at the Al-Aqsa mosque. He warned that Israeli actions could trigger religious confrontation over the holy sites, adding that this would be the dream of the Islamic State extremist group and would have "ramifications that will affect all corners of the Middle East and beyond." To stop further escalation, Mansour urged the Security Council to address the "explosive situation."

Quiet returned to a contentious Jerusalem holy site Wednesday after three days of clashes between Muslims and Israeli forces at the hilltop compound. Israeli armed forces deployed heavily at the entrance to the compound and adjacent to the Al-Aqsa Mosque, where Muslim demonstrators clashed with Israeli forces over the last three days throughout the Jewish new year holiday of Rosh Hashanah. Police appeared cautious not to inflame the situation by getting too close to the mosque. Fifteen religious Jewish visitors toured the site early Wednesday, accompanied by Muslim authorities who administer the compound and an Israeli officer. The site is revered by both Muslims and Jews and is a frequent flashpoint for tensions. Jews are permitted to visit the hilltop compound but banned from praying there.

Police had entered the Al-Aqsa mosque compound in previous days to disperse protesters who had holed up inside after hurling rocks, concrete blocks and firebombs at officers. The Israeli response sparked condemnations across the Arab world and concern that the tensions could spiral out of control.

Palestinian President Mahmoud Abbas condemned the clashes in particularly harsh language, insisting that none of Jerusalem's holy sites belonged to Israel. "They are all ours and we will not let them desecrate it with their filthy foot," he said. "We will protect Jerusalem and will protect our Christian and Muslim holy sites. We will not leave our homeland. We will remain holding every atom of soil in this homeland."