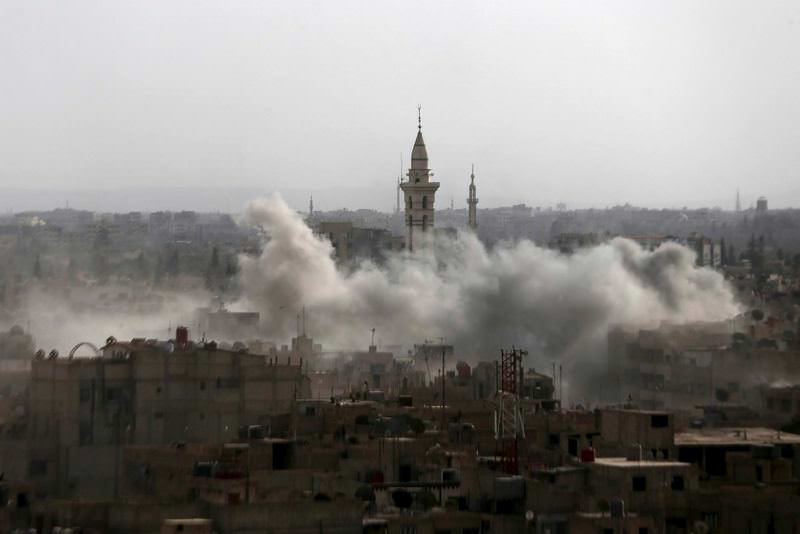 Smoke rises after the Syrian air force bombed Douma, a suburb of the capital, Damascus. Civilians suffer from heavy bombings which are carried out largely with equipment supplied by Russia.
by Daily Sabah with Wires Sep 18, 2015 12:00 am

While the U.S. voices its concerns over the increasing Russian presence in Syria, Russian helicopters were spotted in Syria and a Syrian military source said Moscow has sent new weapons

The Syrian military has recently started using new types of air and ground weapons supplied by Russia, a Syrian military source told Reuters on Thursday, underlining growing Russian support to Damascus that is alarming the United States. The source described the weapons as highly accurate and effective. The army had started using them in recent weeks having been trained in their use in Syria in recent months, the source said. "New weapons are being delivered, and new types of weapons. The Syrian army is being trained in the use of these weapons. In fact, the army has started using some of these (weapon) types," the source said in response to a question about Russian support. "The weapons are highly effective and very accurate, and hit targets precisely," the source told Reuters. "We can say they are all types of weapons - be it air or ground." The source declined to give further details about the weapons.

Alongside Russia's military supplies to the Syrian army, an ally since Soviet times, Moscow is expanding its own forces on the ground in Syria, where more than four years of war have killed an estimated 250,000 people. Facing a manpower problem in the army, the Syrian government has lost ground this year in the northwest, the southwest and the center of the country to an array of groups including Islamic State of Iraq and al-Sham (ISIS) and other insurgents battling to topple Syria's Bashar Assad.

The Obama administration plans to accept an offer from Russia for direct talks on its military buildup in Syria that U.S. officials believe is aimed at propping up Assad. The move comes amid increasing unease and uncertainty over Russia's intentions.

Seeking answers to myriad questions about the precise reasoning behind Moscow's recent deliveries of materiel and manpower to a base in northern Syria, U.S. officials said they expect the administration to begin a military-to-military dialogue with Russia in the coming days. The Pentagon will take the lead in the discussions but the exact level, venue and timing have yet to be determined, officials said. Those details could be announced as early as Wednesday, according to the officials, who spoke on condition of anonymity because they were not authorized to discuss the matter publicly. Secretary of State John Kerry revealed the Russian offer for talks when he told reporters on Wednesday that Russian Foreign Minister Sergey Lavrov had proposed them in a phone call a day earlier. Kerry said he personally thought the idea was a good one, but stressed that the administration was still weighing its merits. Other officials said later that national security adviser Susan Rice had signed off on the talks and that Defense Secretary Ash Carter had agreed. After their third phone call on the Syria situation since Labor Day weekend, Kerry said Lavrov had proposed a "military-to-military conversation and meeting in order to discuss the issue of precisely what will be done to de-conflict with respect to any potential risks that might be run and have a complete and clear understanding as to the road ahead and what the intentions are." "You have to a conversation in order to do that," Kerry said. "It is vital to avoid misunderstandings, miscalculations (and) not to put ourselves in a predicament where we are supposing something and the supposition is wrong."

White House spokesman Josh Earnest, without commenting on specific consultations, said the Obama administration "would welcome constructive Russian support for the efforts of the anti-ISIL coalition in Iraq and in Syria." Kerry said Lavrov had told him that Russia was only interested in confronting the threat posed by the ISIS in Syria. But Kerry stressed it remained unclear if that position would change and Russia would mount a defense of Assad who the U.S. believes must leave power. "Obviously, there are questions about that," he said. "I am not taking that at face value."

The United States has identified a small number of Russian helicopters at a Syrian airfield, U.S. officials said on Wednesday, the latest addition to what Washington believes is a significant Russian military buildup in the country. One of the officials said four helicopters had been identified, including helicopter gunships, although it was not clear when the Russian helicopters had arrived there. The officials spoke to Reuters on condition of anonymity. Reuters has previously reported on U.S. assessments that Russia has sent about 200 naval infantry forces, battle tanks, artillery and other equipment to an airfield near Latakia, a stronghold of Assad.

Russia's military buildup in Syria has perplexed the Obama administration and left it in a quandary as to how to respond. In the afterglow of the Iran nuclear deal, which was hailed by the Obama administration as the kind of diplomacy that can be achieved when Russia and the United States cooperate, U.S. officials had hoped for a change in Russia's position about Syria, potentially even enlisting its support to move Assad out.

Along with Iran, Russia explicitly supports the Syrian regime and, according to the opposition groups, uses ISIS threat as a pretext for aiding Assad who is considered responsible for the death of hundreds of thousands of Syrians. Despite the calls on Russia to change its stance and help seeking solution, Moscow is not likely to change their policy and stance as the Putin administration vows to increase its military and financial support for the regime.
RELATED TOPICS