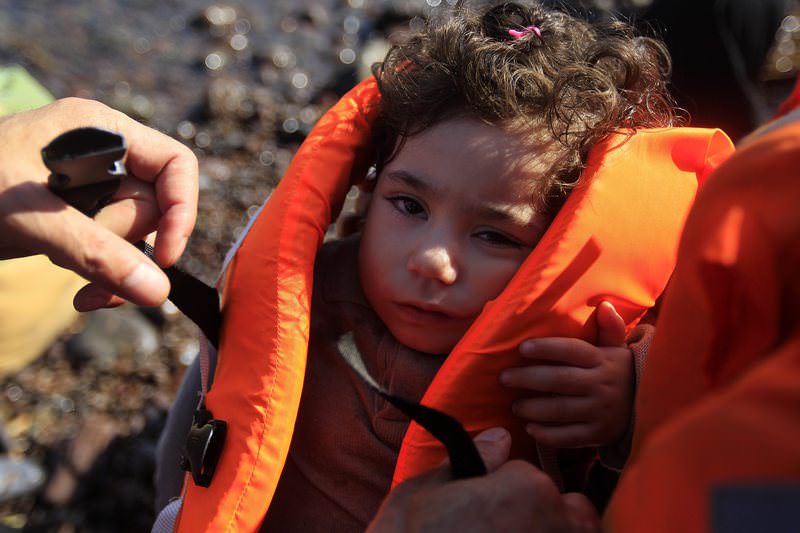 A father takes off a life jacket from his son after they arrive at the coast of Mytilini, Lesvos island, on a dinghy after crossing from Turkey, 14 September 2015. (EPA Photo)
by Sep 21, 2015 12:00 am
Ali's friends told him to bring a life jacket, so the young Iraqi man headed to a Baghdad sports shop and bought a bright orange one with a whistle attached.

He wore shorts and a T-shirt, but was not planning a vacation or a day at the beach. Ali sees no future for himself in Iraq and intends to make the perilous sea journey to Europe that has claimed thousands of lives this year.

The trip by sea in overcrowded boats begins on the Turkish coast more than 1,500 kilometres (930 miles) from Baghdad, but Ali and other Iraqis are preparing in advance, driving a major increase in life jacket sales.

Born the year Saddam Hussein's forces invaded Kuwait, Ali lived through that war, a decade of punishing sanctions, years of fighting between US-led forces and insurgents, and the conflict with ISIS, which overran large parts of Iraq last year.

He has had enough.

"I want to immigrate to any place that is better than this country," Ali said. "Greece, Germany... any country."

"The important thing is that I leave Iraq, because there is no life in Iraq," he said. "There is no safety in Iraq... and no employment."

Some of his friends already reached Greece and have encouraged him to come as well, telling him to bring a life jacket when he does.

Smugglers may not provide enough life jackets, and while estimates of costs vary, they are said to be much cheaper in Iraq than in Turkey.

Many Iraqis are making the trip, with more than 9,000 arriving in Greece between January and the end of August this year, the fifth-largest group by nationality, according to the International Organisation for Migration.

But travelling to Europe by sea carries deadly risks: more than 2,800 people have died in the Mediterranean this year, including over 380 from the Middle East and North Africa, the IOM said

Iraqi children are among those who have died at sea, and ISIS has even used the shocking image of drowned Syrian toddler Aylan Kurdi, who washed up on a beach in Turkey, to warn refugees against fleeing to the West.

Ali is not the only Iraqi heading to Baghdad's Rashid Street, where many of the city's sports shops are located, to buy life jackets for the trip to Europe.

Shopkeepers and employees on the street say sales of life jackets have reached a level they have not seen before.

"In general, demand for life jackets was higher than any year" previously, said Jawad Tawfiq, a shop owner who has sold sporting goods for some 30 years.

But Tawfiq, who lived in the Netherlands for more than 15 years before returning to Iraq, warns young people against viewing Europe as a magic solution to their woes.

"I advise the young people not to (emigrate). What is their future there?" said Tawfiq, noting that racism in Europe has increased and finding work can be difficult.

Amer, who works at another shop, said he tells customers the life jackets he sells are not designed for use at sea -- information that deters some buyers, but not all.

While some Iraqis are purchasing life jackets to increase their odds of safely arriving in Europe, others are practicing swimming to do the same.

Ali Mahdi Alwan, a 52-year-old former member of the Iraqi army club swimming team, is providing lessons to some of those seeking to reach Europe by sea.

Fifteen people received swimming training from him before leaving Iraq, Alwan said on the bank of the Tigris River.

"This is the second group that I am training now, and their families are waiting," he said, pointing to a group of boys swimming in the river.