US may negotiate with Russia time of Assad's departure, Kerry says 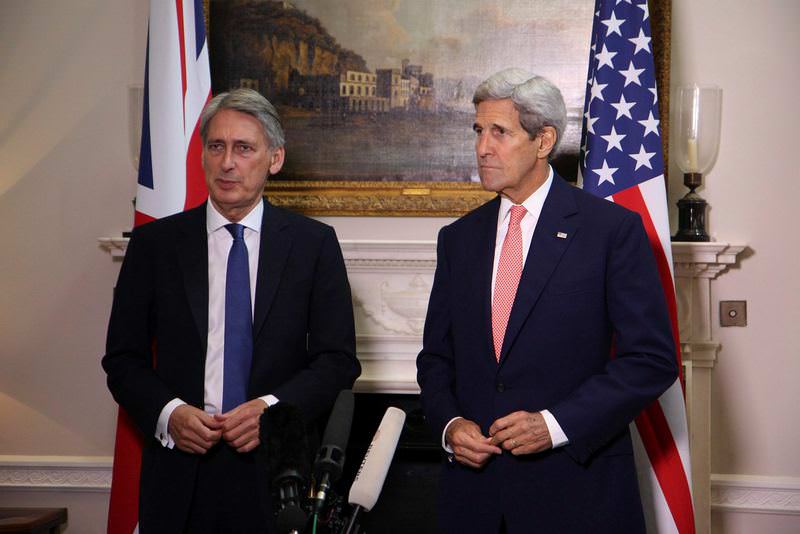 Amid increasing military support for the Syrian regime by Russia, the U.S. has softened its tone against Assad. Despite repeating that Assad must leave, U.S. Secretary of State John Kerry said the time would be negotiated with Russia

U.S. Secretary of State John Kerry said on Saturday Syria's Bashar Assad has to go but the timing of his departure should be decided through negotiation. Speaking after talks with British Foreign Secretary Philip Hammond in London, Kerry called on Russia and Iran to use their influence over Assad to convince him to negotiate a political transition. Kerry said the United States welcomed Russia's involvement in tackling the Islamic State of Iraq and al-Sham (ISIS) in Syria but a worsening refugee crisis underscored the need to find a compromise that could also lead to political change in the country. "We need to get to the negotiation. That is what we're looking for and we hope Russia and Iran, and any other countries with influence, will help to bring about that, because that's what is preventing this crisis from ending," said Kerry. "We're prepared to negotiate. Is Assad prepared to negotiate, really negotiate? Is Russia prepared to bring him to the table?"

He said that Russia's movement of tactical aircraft and surface-to-air missiles to Syria could pose a threat to American and allied forces, and made clear that the U.S. could accept a resolution to the civil war that allows Assad to remain in power for an unspecified time. U.S. officials said Russia sent a small number of fighter jets to a base in Syria on Friday, hours after U.S. Defense Secretary Ash Carter talked with Russia Defense Minister Sergei Shoigu in the first military contacts between the two countries in some time. "Clearly, the presence of aircraft with air-to-air combat capacity ... and surface-to-air missiles raise serious questions," Kerry said. The Russians have deployed at least one such system, according to an American official, who was not authorized to discuss military matters and spoke on condition of anonymity.

Russia says its recent military buildup in Syria is designed to fight ISIS. While ISIS lacks an air force, the Russian aircraft are capable of striking ground targets and providing close air support for ground forces, a U.S. intelligence official said. Kerry said the military-to-military talks with the Russians are designed to make sure there are no incidents between Russian and American forces. The discussions also amount to a tacit acceptance of the Russian buildup, after weeks of warnings from Washington against any Russian escalation in Syria. The goal, Kerry said, is to make sure "there's no potential of a mistake or of an accident of some kind that produces a greater potential of conflict."

Before the U.S., the U.K. softened its tone against Assad as Hammond said on September 9 that Britain could accept Assad staying in place for a transition period if it helped resolve the country's conflict. Britain, along with other Western countries, has repeatedly called for Assad to go, saying it is a precondition for bringing an end to the brutal four-year-long civil war that has killed an estimated 250,000 people and shattered the country.