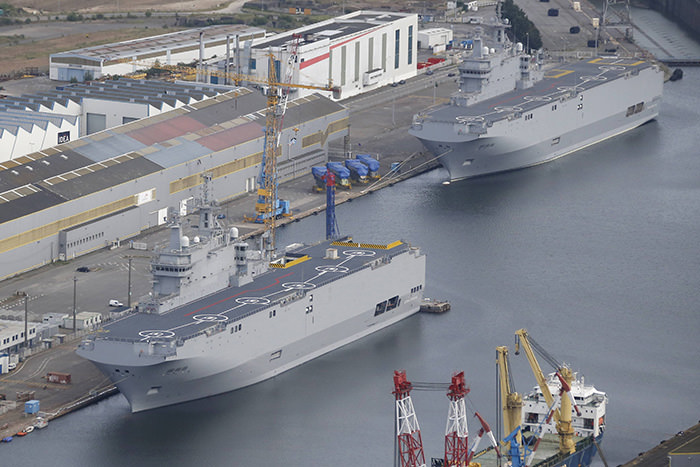 Two Mistral-class helicopter carriers are seen at the STX Les Chantiers de l'Atlantique shipyard site in Saint-Nazaire, France, on May 25, 2015 ( Reuters Photo)
by Daily Sabah with AP Sep 23, 2015 12:00 am
Egypt has agreed to buy two Mistral-class warships from France, the French government said Wednesday, announcing its second military sale to the economically-strapped country this year.

The assault ships, which can each carry 16 helicopter gunships, 700 troops and up to 50 armored vehicles, were originally intended for Russia. France continued building to Russia's specifications including stenciling Cyrillic writing throughout the vessels until the deal finally fell apart because of the Ukrainian crisis. It was originally supposed to be the biggest arms sale ever by a NATO country to Russia.

Turkey was among the countries that are rumored to buy the warships as it plans to increase it presence in the eastern Mediterranean.