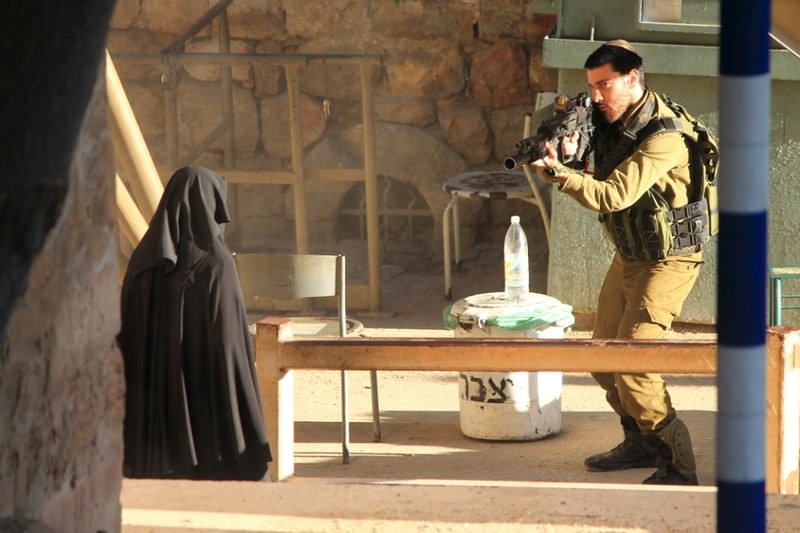 by Daily Sabah with AA Sep 23, 2015 12:00 am
A Palestinian woman succumbed to her injuries after being shot by Israeli troops earlier Tuesday, the Palestinian Ma'an news agency has reported.

An Israeli military spokesperson claimed that the woman had been shot at an army checkpoint in the West Bank city of Hebron after trying to stab an Israeli soldier.

Local residents, however, dispute the army's claims that the woman identified as 18-year-old Hadeel Hashlmon had attacked a soldier.

"The soldiers wanted her to remove her niqab [Islamic face covering], but she refused," Issa Amro, director of Youth Against Settlements, a Hebron-based Palestinian activist group, told Anadolu Agency.

"When she tried to leave the checkpoint, they shot her," he added.

According to Amro, volunteers from the group witnessed the incident.

Earlier the same day, they released photos that appeared to show Israeli soldiers pointing guns at the woman and lying her injured body on the ground.

The incident follows the death of a Palestinian man on Monday night, who, the Israeli army alleged, had died when an explosive device he had intended to throw detonated prematurely.

The Ma'an news agency, however, quoted local officials as saying that the 21-year-old had been shot dead by Israeli troops.

Tension has recently run high in the Israeli-occupied West Bank and Jerusalem, with a number of clashes erupting after groups of Jewish settlers forced their way into various Muslim holy sites, including East Jerusalem's Al-Aqsa Mosque complex.
Last Update: Sep 23, 2015 1:09 am
RELATED TOPICS