Muslim pilgrims gather for pinnacle of hajj in Saudi Arabia 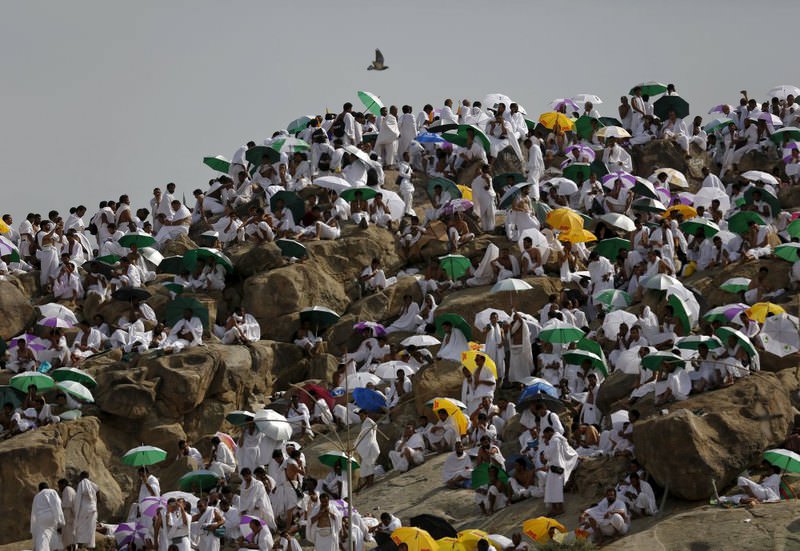 Muslim pilgrims pray on Mount Mercy on the plains of Arafat during the annual hajj pilgrimage, outside the Islamic holy city of Mecca.
by Associated Press Sep 24, 2015 12:00 am

Some 2 million pilgrims on the hajj began gathering at Mount Arafat to perform one of the most important parts of the annual pilgrimage. Pilgrims mark what is known as the "Day of Arafah" by performing prayers until sunset and asking God to forgive their sins

Muslim pilgrims from around the world gathered before dawn Wednesday in the valley of Mount Arafat in Saudi Arabia for a day of prayer that marks the pinnacle of the annual hajj pilgrimage.

Some 2 million pilgrims packed should-to-shoulder for an emotional day of repentance and supplication. Many wept as they raised their hands toward the sky, asking for forgiveness and praying for loved ones. It was on this day some 1,400 years ago that Islam's Prophet Muhammad delivered his final sermon from Mount Arafat during the hajj, calling for equality and for Muslims to unite.

Throughout the day, hundreds of thousands of pilgrims scaled the hill and prayed facing the Kaaba, the cube-shaped structure in Mecca that observant Muslims around the world face in prayer five times a day. Muslims believe prayer on this day at Mount Arafat, about 20 kilometers (12 miles) east of Mecca, is their best chance to erase past sins and start anew.

Islam requires that all able-bodied Muslims perform the hajj once in their lives. While following a route the Prophet Muhammad once walked, the rites are believed to ultimately trace the footsteps of the prophets Ibrahim and Ismail, or Abraham and Ishmael as they are named in the Bible. The five-day hajj began Tuesday with the shedding of symbols of materialism men donned white terry cloth garments meant to symbolize humility and equality while women give up makeup and perfume, covering their heads and wearing loose-fitting clothing.

As every year, for many pilgrims it is their first time to travel outside their country, having spent years saving for what for most is an expensive pilgrimage. Once back home, they will be referred to in their communities with the respectful title of "hajji" for having completed the pilgrimage. The hajj is the largest gathering of Muslims worldwide, drawing to it people from different social classes and religious sects, with Sunnis and Shiites praying side by side.

The day spent in Mount Arafat is one of the few times during the hajj that all pilgrims are in the same location at the same time and is often described as the most moving experience of the hajj. "This is the place where the prophet ... had his last hajj all the way form Mecca to here. We are following his footsteps," said Abdul Halim Yusuf-Ali, a 21 year-old Islamic studies student from Kenya. Yusuf-Ali was among thousands praying at Mount Arafat before sunrise Wednesday. He said it was more important than ever for Muslims to heed the words from the prophet's last sermon, calling for unity and equality. "It is very important because now Muslims' political situation is very chaotic and many Muslims are being killed every day, and it is just the other way around from what the Prophet emphasized," Yusuf-Ali added.

Among the most volatile corners of the Muslim world is Yemen, where a Saudi-led coalition is fighting Shiite rebels known as Houthis, who overtook major cities last year and ousted the interim president from the capital. For Yemeni pilgrim Essam Ahmed, whose country is embroiled in a bitter civil war pitting pro-government forces backed by Saudi Arabia against Shiite rebels known as Houthis and their allies, it was important to pray for the defeat of the rebels. "We pray to Allah to solve our problems, and we pray to get rid of the Houthis who have destroyed Yemen," he said.

Before arriving at Mount Arafat, pilgrims circled the Kaaba. Next, they traced the path of Hagar, the wife of the Prophet Abraham, who Muslims believe ran between two hills seven times searching for water for her dying son. Tradition holds that God then brought forth a spring that runs to this day, and Muslims drink from it during the hajj. The hajj is physically demanding and involves walking long distances, so those with disabilities and the elderly are often pushed in wheelchairs.

Saudi authorities say there are 1.4 million international visitors for the hajj this year. At least 600,000 pilgrims from the kingdom itself are also expected to take part.
RELATED TOPICS