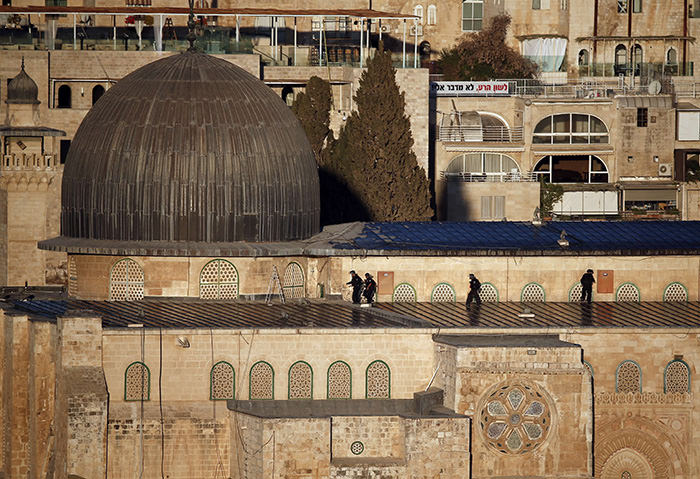 Israeli security forces keep position on the roof of the al-Aqsa mosque in Jerusalem's old city during clashes with Palestinians on September 28, 2015 (AFP Photo)
by Daily Sabah with Agencies Sep 28, 2015 12:00 am
New clashes broke out yesterday between Palestinians and Israeli police who stormed Jerusalem's Al-Aqsa mosque compound, as an expected increase in Jewish visitors to the site over the Sukkot holiday boosted tensions. "At least 370 Israeli soldiers and police officers stormed the Al-Aqsa Mosque through Al-Mugharbeh and Al-Silsila gates and fired tear gas, stun grenades and rubber bullets at worshipers near the Al-Qibali Mosque," witnesses told Anadolu Agency.

Protesters had barricaded the entry to the compound, reportedly because of a rumor that hard-line Jewish groups would attempt to forcibly enter on the final day of the Muslim festival of Qurban Bayram on Sunday, which also sees the start of the Jewish festival of Sukkoth. Witnesses at the scene said that 20 Israeli soldiers went up to the roof of the Al-Qibali Mosque, smashing windows and shooting at worshippers. Sheikh Omar al-Qiswani, the Al-Aqsa Mosque director, told Anadolu Agency that one Palestinian was hit with a rubber bullet and 25 Palestinians inhaled tear gas. He added that Israeli soldiers closed all the gates of the Al-Qibali Mosque with iron chains and surrounded the Al-Aqsa Mosque preventing men under the age of 50 from entering the mosque compound.

The Palestinian Red Crescent reported that 22 people were wounded and three were hospitalized after being hit by rubber bullets, including one person struck in the face while inside the mosque. There were no deaths.

Police said negotiations to have the youths leave had failed, leaving them no choice but to carry out the raid to keep them from disrupting visits to the site. Dozens of officers were deployed, including some on the mosque's roof. Muslim worshipers, who were at the compound after morning prayers as the raid began, were forced to leave by police and all gates used by Muslims to enter the site were closed. Some remained near the gates and chanted in protest.

Regular visits by non-Muslims permitted between 7:30 a.m. and 11 a.m. were then allowed to go ahead, according to police, with 450 tourists and 24 Jews visiting. Calm later returned to the site.

Tensions have been high over the past two weeks during a series of Jewish and Muslim religious holidays, provoking international calls for calm. The Jewish holiday of Sukkot is being celebrated on Monday, immediately following the end of the four-day Muslim festival Qurban Bayram. Jews are allowed to visit the site, but cannot pray. Muslims fear Israel will seek to change rules governing the compound, which is located in Israeli-controlled east Jerusalem. A campaign by a hard-line Jewish minority to build a new temple at the site has further stoked suspicions.

Visits by Jews were stopped and age restrictions on Muslim men entering the compound were lifted, during Qurban Bayram, which was celebrated from Thursday to Sunday. However, a ban on Muslim men under 50 was re-imposed as Sukkot started. Jews celebrate Sukkot, or the Feast of Tabernacles, to commemorate their journey through the Sinai wilderness to the Holy Land after their Exodus from Egyptian slavery. Many Palestinians accuse Israel of trying to take control of Al-Aqsa to divide it between Muslims and Jews, who also revere the site as the Temple Mount. In repeated statements over recent weeks, Israeli politicians, including Prime Minister Benjamin Netanyahu, have insisted they intend to maintain the status quo of the site in east Jerusalem.

The Al-Aqsa mosque compound is considered holy by both Muslims and Jews, who call it Temple Mount. Israel occupied east Jerusalem, where Al-Aqsa is located, in the Six-Day War of 1967 and later annexed it in a move never recognized by the international community.