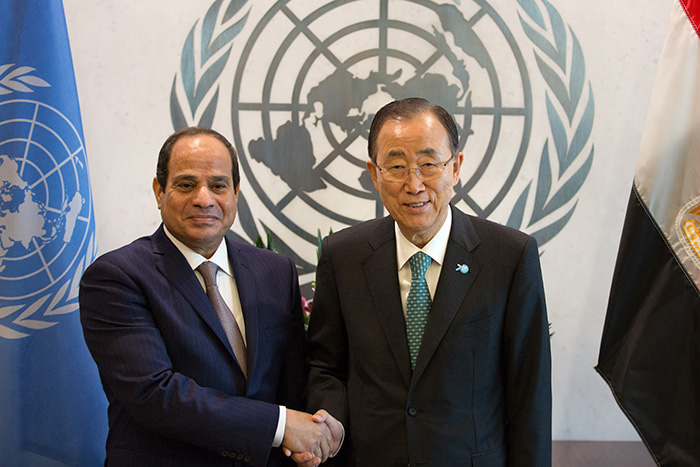 U.N. chief met with Sissi, who came to power after toppling down former President Mohamed Morsi- Egypt's first democratically elected president - on the sidelines of the U.N. General Assembly in New York, as more than 140 world leaders flocked to the city to attend the annual "general debate".

"[Ban] called on President Sisi to exercise leadership in protecting human rights and human dignity in Egypt and in the region," it added.

Last week, the Egyptian leader pardoned 100 prisoners, including three Al Jazeera journalists who had been slapped with jail terms earlier this month for "spreading false news".

A number of western governments and rights groups had called for journalists' release amid an international solidarity campaign led by Al Jazeera.

According to the New York-based Committee to Protect Journalists, at least 18 journalists remain behind bars in Egypt for doing their work.

Since the coup, thousands of other Egyptians have been put in prison for supporting former President Morsi. Many journalists, academics and supporters of democracy have been detained and held in military facilities. Many of those who were jailed have died in custody as a result of mistreatment.
Last Update: Sep 29, 2015 4:48 pm
RELATED TOPICS