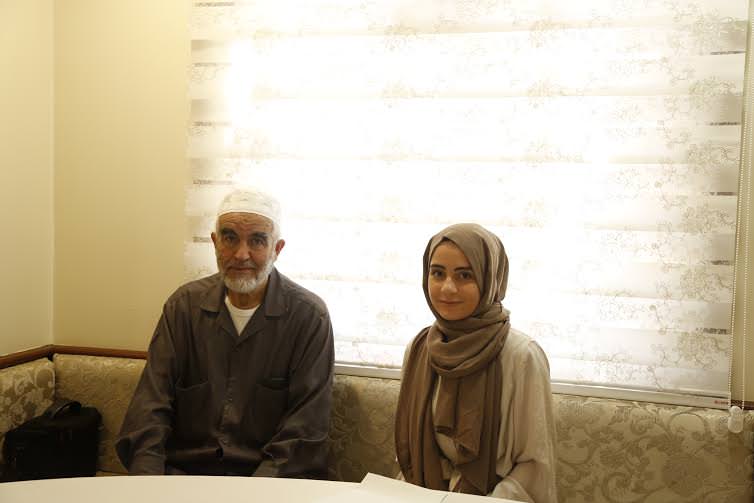 As the Israeli government and Jewish groups' raids on Jerusalem’s Al-Aqsa mosque increase significantly in the recent weeks, Sheikh Raed Salah said the mosque faces the greatest threat in its history: the temporal and spatial division as a first step and then the ultimate destruction of the Al-Aqsa Mosque

The Islamic Movement leader and defender of the Al-Aqsa mosque, Sheikh Raed Salah speaking to Daily Sabah in an exclusive interview said that the recent increase in Israeli aggression points out its intentions to apply the same method used in the division of the Al-Ibrahimi Mosque into a Muslim section and a Jewish section to the Al-Aqsa mosque. He added that the step would ignite a serious fire in the region that would be impossible to extinguish.

Salah also called on Palestinian Authorities to carry the Al-Aqsa issue to every international level, stand with its own peoples' choices and accept the hand extended from Gaza to free the Al-Aqsa Mosque from occupation.

We have witnessed increase in the Israeli offensive on the Al-Aqsa Mosque, in the last few days. How should we read these offensives? How dangerous are these Israeli actions? And what is the target the Israeli government is trying to reach by not allowing Muslim worshipers to enter the Al-Aqsa mosque during the Jewish New Year holiday?

The Israeli offensives on the Al-Aqsa Mosque have never stopped since the start of occupation in 1967. The Al-Aqsa Mosque hasbeen in great danger since then. However, in the last period, the attacks have increased dramatically, and it has started to develop an official identity, as the Israeli government itself started to sponsor the attacks, which previously seemedto be the acts of some Jewish groups.

Today, the Israeli government attempts to enforce division on the Al-Aqsa Mosque. This division comes as a step to build the mythical temple in an effort to replace itAl-Aqsa. Therefore, the Israeli government sponsors and supports raids on Al-Aqsa, which are continuous all year long-most especially during the Jewish religious special days, mostly in September, October, March and April. The Israeli government calls Jewish organizations and associations to increase their attacks on the Al-Aqsa Mosque during these months, and calls to enforce temporal division, in a way that Muslims can pray in the mosque only in few and specific hours, while Israeli raids continue at that (window of time)time.
Undoubtedly, the people of Jerusalem, and Palestinians inside the green line, condemn these attacks, in the name of all Muslim nations. Therefore, they try to step up their presence in the mosque, during these times. They have nothing, but their unarmed bodies, their faith in God, and their solid will to defend Al-Aqsa.

There is no doubt that the Palestinian presence in the mosque makes Israel lose its mind, and act hysterically. What happened last week is an example, as Israel evacuated all Muslims from the mosque, and 'chased' them outside the walls of the Old Town, and assaulted them with tear gas and sound bombs and in other ways. The Israelis also assaulted those who were inside the roofed Kibly mosque, using gas bombs, rubber bullets and sound bombs, leaving 100 injured in the first three days of last week.

The biggest threat the Al-Aqsa mosque is facing these days is the Israeli plan to enforce atemporal division, as a step to enforce spatial division. When Israel talks about the Aqsa mosque, they mean only the Kibly mosque which is a high-ceiled building that makes only 10% of the 144-acre Al-Aqsa compound.. On the other hand, they treat the rest of the mosque as less worthy, and they plan to deconstruct the Dome of the Rock, to build the temple claimed mythical.

As you know, Baruch Goldstein's massacre happened on Ramadan February 25, 1994. The massacre resulted in the killing of 29 Palestinians, and injuring more than a hundred, when Baruch Goldstein entered the mosque with an electronic machine gun, after having permission from the Israeli police at the gate. Goldstein opened fire on Muslims while they were offering the Fajr (morning) prayer.

The Israeli government then formed a commission of inquiry called Shamgar, and closed the mosque for investigation for six months. The result of the investigation came with a decision to divide the mosque spatially giving 60% of it to Jews and 40% to Muslims, and temporally depriving Muslims from their right to pray in the mosque for 10 days in a year, while allowing Jews to enter the mosque all year round. The results also included adding electronic doors to the entrance of the mosque and enforcing strict security measures. The Israeli occupation attempts to apply the case to the Ibrahimi mosque, as well, taking advantage of the troubled realities of the surrounding Arabic countries and the situation in the Middle East.

How do you evaluate the reactions of Palestinians? And how would the current situation in Palestine change if Israel continues to follow its own plans?

Naturally, the ones who can reach the Al-Aqsa Mosque are only Palestinians living in Jerusalem, and inside the green line. And we and the people of Jerusalem are doing our best to step up our presence in the mosque, as Palestinian NGO's send buses carrying people from different cities inside the green line to the Al-Aqsa mosque. These buses carry people for free the whole year, before and after Fajr prayers, before Zuhr and Asr prayers, and sometimes at night for the Maghrib and Isha prayers. Other NGO's work on sponsoring religious courses in the mosque. As I mentioned before, people of Jerusalem and people in the green line are always present at the mosque, to stand against Israeli attacks.

However, these efforts on the ground need assistance from different Palestinian bodies, because the Al-Aqsa is not for the Islamic Movement only, and is exclusive for the people of Jerusalem and those inside the green line. Therefore, I think that Palestinian Authorities should play its role to defend the Al-Aqsa mosque, and allow Palestinians in West Bank to defend their mosque. It was sad to see Palestinian security forces oppressing a demonstration of solidarity to Al-Aqsa in aPalestinian city, arresting a protestor and beating him.

I also hope that Palestinian Authorities would take responsibility for this file, and carry the issue of Al-Aqsa to all international levels. I hope that Palestinian Authorities will stand with its peoples' choices and with its political parties despite their differences. I hope that it will accept the extended hand from Gaza, and actively be involved in the Palestinian reconciliation and stop security cooperation with the Israeli occupation, for the benefit of e national cooperation between the Palestinians, in order for Palestinians to unite their efforts to free the Al-Aqsa Mosque from occupation.

Israel unlawfully arrests Muslim worshipers while they are trying to enter the Al-Aqsa Mosque. How can Palestinians fight against that with the lack of international support?

The Israeli offensive on the Al-Aqsa mosque has become aggressive and clear, as all types of Israeli security forces take part in the attacks on Muslims every day. We all saw pictures of Israeli occupation forces assaulting women in Al-Aqsa, taking off their headscarves, and beating them. We also witnessed continuous arrests for men and women, in addition to depriving worshipers from praying in Al-Aqsa, and deporting them away from the city. Moreover we witnessed the attacks to the guards of Al-Aqsa, and stopping them from doing their job, which is undoubtedly an attack on the Religious Affairs Ministry of Jordan, from where those guards are hired. This can be considered a violation of Jordanian sovereignty, thus urging them to take action about the Aqsa mosque.

Despite all of that, we will keep defending the Al-Aqsa mosque, at our best, because we have the right. The right is more powerful, even if unarmed, than the false. We pray in Al-Aqsa and we defend it. We pray where they don't allow us. We keep our voices up.

Do you think that the international community, and Muslim countries in specific, can understand the threat on Al-Aqsa?

The Al-Aqsa mosque is now facing the most dangerous threat in its history, as the Israeli occupation tries to divide the mosque and build a mythical temple. The international community needs to understand that Israel cannot do that, otherwise it will ignite the whole region with a fire that is difficult to extinguish. And I wonder how the international community does not pressure the Israeli occupation to stop its attacks on the Al-Aqsa mosque and its people!

I would like to send a message to Muslim and Arabic countries. TheAl-Aqsa mosque is not exclusively for the people of Jerusalem and those in the green line, nor only for Palestinians, but it is the first of the two Qibla, and the second mosque in the history, and it's the place of Israa and Miraj, and the third mosque to travel to. Therefore, we all have to take responsibility and defend it.

What kind of steps need to be taken to fight against the threats on the Al-Aqsa Mosque? And what do you expect from Muslim countries?

I hope that Arab and Muslim countries understand the reality of danger around Al-Aqsa, and understand that Al-Aqsa is the only thing that can unite all nations with different hopes and pains. I think that the different components of our nation should unite to support Palestinians of Jerusalem, as they are at the first front in this struggle. Palestinians of Jerusalem face a lot of problems, such as poverty and unemployment. We need to provide them with a secure life, and support them financially, emotionally, socially and politically. I think Arab and Muslim countries should bring this issue to all international levels, officially, judicially, and in terms of human rights and NGO's. I think media in Arab and Muslim countries should keep the issue of Al-Aqsa alive and hot on its agendas, and keep it alive in the minds and consciences of people.

You are one of the most prominent leaders defending Al-Aqsa. What would you like to tell us about yourself and your struggle all these years?

I personally have done all until now, for Allah first, and for the freedom of the Al-Aqsa mosque. On a personal level, as you know, I am prohibited from entering the city of Jerusalem, and from entering the Al-Aqsa mosque since 2007. I was previously arrested for six months, after we protested near the Al-Magharibah road, against the Israeli occupation's destruction of a part of the Al-Maghariba road. We have been arrested and taken to court, and I was held in prison for 6 months. And I am still facing a lot of issues in Israeli courts, as they try to stop me from what I'm doing. I am also not allowed to travel outside the country so that I don't speak about this issue and spread knowledge about it abroad. We still hold "Al-Aqsa in danger" ceremonies and have been holding for 20 years, since 1996. With this activity, we open the eyes of the Muslim and Arab World to the real danger surrounding Al-Aqsa, and we call to liberate it from Israeli occupation. We also support different NGO's that take Al-Aqsa as its main issue and concern, and support Palestinians against Israeli plans to destruct the Al-Aqsa mosque.