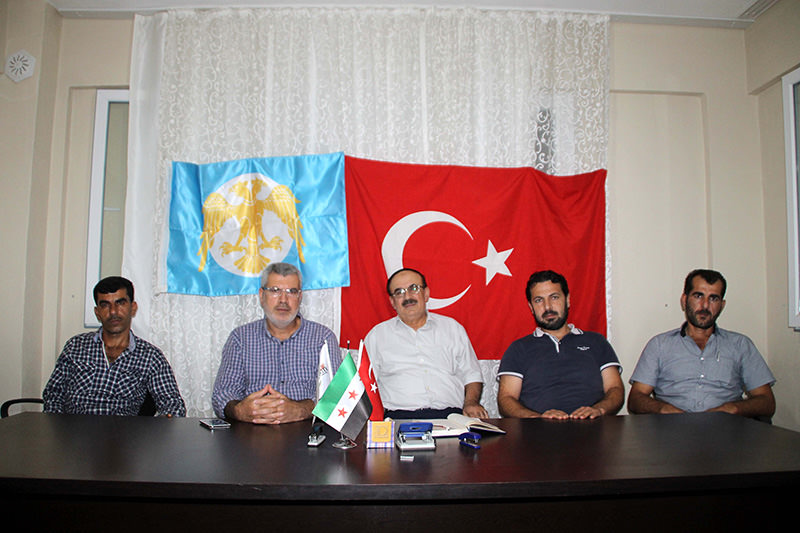 u00d6mer Ceren, advisory board member at the Ankara-based Turkmen group (in the center) | AA Photo
by Anadolu Agency Oct 04, 2015 12:00 am
Syria's Council of Turkmen has said that Russia's intervention is to support President Bashar al-Assad from the Syrian opposition, not to fight ISIS.

On Wednesday, Russian warplanes struck targets inside Syria for the first time. According to a Russian Foreign Ministry statement on Saturday, strikes had targeted positions held by the ISIS militant group.

Speaking to Anadolu Agency on Sunday, Ömer Ceren, an advisory board member at the Ankara-based Turkmen group, said that Russia's intervention was a "pretext" to support the Assad regime. He went on to claim that no Russian operations had targeted ISIS.

Syria's Council of Turkmen is a foundation that represents Turkmen people in Syria and aims to protect their rights.

Ceren, who is also responsible for Turkmen in Latakia's BayIr Bucak area in northwestern Syria, said that the timing of the Russian support to Assad has come at a moment when the regime was weakened by opposition groups.

Ceren said that anti-Assad forces "were about to take control of the Homs-Damascus road as well as breaking the regime's blockade imposed on Northern Ghouta. Russia saved Assad from execution".

"ISIS does not exist in areas targeted [by Russian attacks]," Ceren said, adding: "Especially hospitals and villages are being targeted."

The Turkmen representative claimed that in Idlib, Aleppo and Latakia provinces 200 civilians had been killed in the past three days of bombing.
In the past five days, bombardments on the predominantly Turkmen villages in Bayır Bucak area have increased by "300 percent," Ceren said, condemning the attacks that he described as "unprecedented" since the beginning of the Syrian civil war.

Turkmen are a Turkic ethnic group based largely in Syria and Iraq, where they live alongside large Arab and Kurdish populations. The Turkmen community, which includes both Sunni and Shia Muslims, shares close cultural ties with the Turkish people.

Syria's devastating civil war, now in its fifth year, has left some 250,000 people dead, according to UN figures, and the country divided between different heavily armed factions.