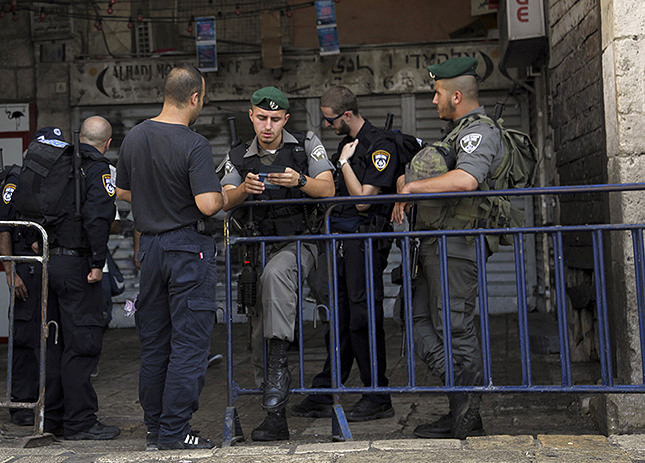 An Israeli border policeman checks papers at the entrance to the Old City in Jerusalem on Sunday, Oct. 4, 2015. (AP Photo)
by Daily Sabah Oct 05, 2015 12:00 am
Turkish Foreign Ministry on Sunday called on Israeli government to stop preventing Palestinian residents of Jerusalem from entering the Old City and added that Israel's one-sided steps which threaten the status quo soared tensions in Jerusalem.

"No excuse can justify preventing Palestinians from entering the Old City which is also home to the al-Aqsa Mosque. Israel must immediately put an end to unlawful actions targeting Jerusalem's peace and status quo," the statement said.

Tensions have run high in the Israeli-occupied West Bank and East Jerusalem since Israeli police have placed heavy restrictions on the entrance to Jerusalem's historic Old City after a stabbing attack left two Israeli settlers and one Palestinian dead.

Only Palestinians who live, work or study in the walled Old City will be allowed in until Tuesday, the police said in a statement. Israeli citizens and tourists will still have access.

The Red Crescent said clashes with Israeli security forces and Jewish settlers have left 77 Palestinians wounded over the past 24 hours, adding that it has documented 14 Israeli settlers' and forces' assaults on 14 ambulances and 12 medics within the past 72 hours across the West Bank and Jerusalem.