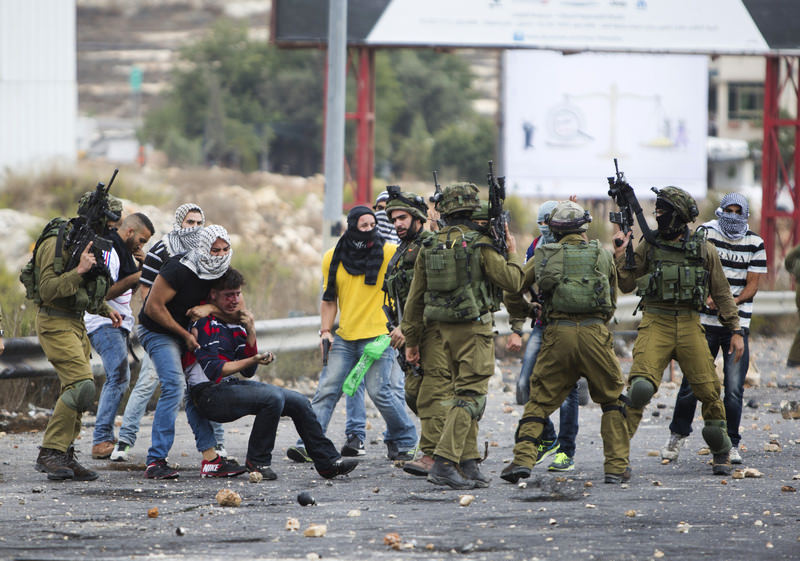 by French Press Agency - AFP
Oct 07, 2015 12:00 am
In a matter of seconds, the men wearing scarves over their faces and throwing stones along with a group of Palestinians pulled out their pistols, opened fire and blew their cover.

"Mustarabiin!" rang out among the crowd of about 100 Palestinians who been hurling stones at Israeli soldiers for several hours at the Bet El checkpoint outside Ramallah.

It is a word used to refer to those who disguise themselves as Palestinians.

The incident on Wednesday, captured on video by an AFP journalist, offered a rare glimpse of what appeared to be Israeli infiltrators embedded in a group of Palestinian protesters.

The Palestinians regularly accuse Israel of placing Arabic-speaking infiltrators among demonstrators in order to make arrests.

The infiltrators on Wednesday grabbed and beat one man while pulling out their pistols, opening fire as stones flew toward them. Three people were wounded, including one left in a critical condition after being shot in the back of the head.

They had been there for at least 30 minutes, AFP journalists reported, but were impossible to recognise beforehand. As riots have spread through east Jerusalem and the West Bank, stone-throwers have almost always been masked or wearing traditional Palestinian keffiyeh scarves.

Arriving with backpacks, trainers and jerseys of Barcelona and the French national football teams, they mixed with students who had called for a "day of rage."

One infiltrator even had a green scarf for Palestinian resistance group Hamas trailing from the pocket of his jeans.

Responding to the call from student guilds, the protesters left from Bir Zeit University under the rallying cry: "Bir Zeit was a stronghold of the intifada (uprising).

"It must lead the movement again."

Clashes broke out immediately after they arrived at Bet El, which has become the site of daily protests amid the recent wave of unrest.

The infiltrators joined the front line, dozens of metres (yards) from soldiers posted there with jeeps and armoured vehicles.

At first, they threw stones like the others. Protesters hid behind a rubbish bin that served as a makeshift barricade against rubber bullets fired by Israeli troops along with tear gas and stun grenades.


In an instant, the infiltrators withdrew from the crowd and pulled out pistols, as the protesters realised what was happening. The protesters threw stones at the men, four of whom pointed their weapons and opened fire.

"Suddenly we saw four masked men who had been throwing stones with the others take out guns from their waistsbands and three others who rushed toward a demonstrator." the AFP correspondent reported.

"There were screams, most of the Palestinians ran away as fast as they could and the Israeli agents opened fire as stones flew toward them."

Three others who were unarmed grabbed two wounded youths and beat them. One youth who ran was hit in the back of the head.

Israeli soldiers rushed to the scene and fired in the air. Both the infiltrators and the soldiers then grabbed three of the youths and brought them toward jeeps and armoured vehicles, leaving streaks of blood on the ground.

"Be careful -- they arrested them. They're mustarabiin," one protester said.

Another said "they're always in the middle of the crowd."

Israel's military declined to comment directly on who the infiltrators were. Spokesman Arye Shalicar said only that the army is equipped with such units, without confirming whether or not those involved in Wednesday's incident were among them.

Shalicar confirmed that one of the wounded protesters from Bet El was held by Israel and in critical condition.

After being dragged toward the military post, the three wounded protesters were on the ground surrounded by soldiers before being loaded aboard army ambulances.

The person hit in the back of the skull tried to lift his head several times and breathed with difficulty. Another was wounded in the thigh, while a third writhed on the ground.
Last Update: Oct 07, 2015 9:59 pm