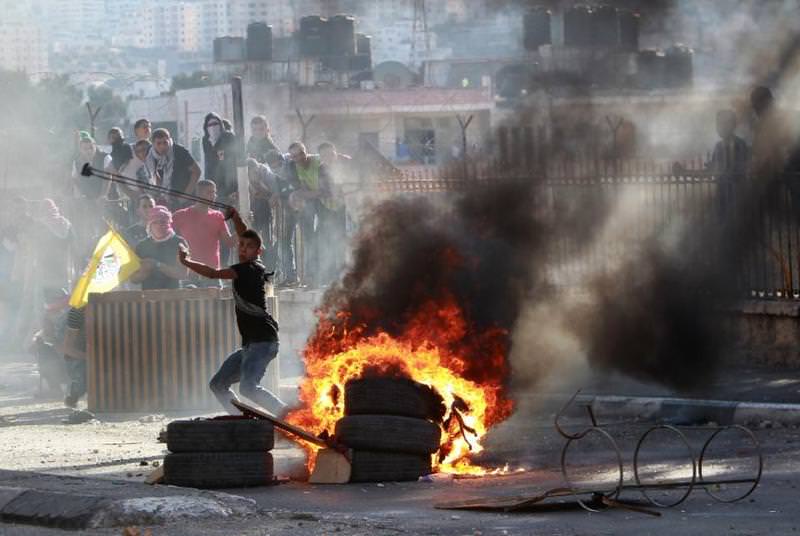 An Israeli border police officer stands guard near the scene after an attack involving a Palestinian woman and Israeli man in the Old City of Jerusalem.
by Daily Sabah with Wires
Oct 08, 2015 12:00 am

Al-Aqsa Mosque was reopened after clashes between Palestinian protesters and Israeli security forces. Yet, stabbing of an Israeli by a Palestinian yesterday showed that tensions have not de-escalated

Israel on Wednesday lifted restrictions on Al-Aqsa Mosque that have sparked three weeks of clashes between Palestinians and Israeli forces. The removal of a ban on men under 50 entering the mosque, the third holiest in Islam, came during a fourth consecutive day of heavy clashes. For the first time, the clashes spread to Palestinian-majority Jaffa, adjacent to Israeli capital Tel Aviv, where police spokesperson Micky Rosenfeld said 200 youth clashed with police on Tuesday night after a protest against the Al-Aqsa restrictions was prevented. Red Crescent officials said 90 Palestinians were injured in the occupied West Bank during Tuesday's clashes, with many of them coming at the Qalandiya checkpoint, which separates East Jerusalem from the center of the Palestinian Authority administration in Ramallah. U.N. Secretary-General Ban Ki-moon urged Israel on Tuesday to conduct a full investigation of recent clashes in Occupied Jerusalem and the West Bank and criticized the demolition of Palestinian houses. Ban said a "prompt and transparent" probe of the recent violence in which a 13-year-old was killed by Israeli soldiers would serve to determine "whether the use of force was proportional." He said that the latest clashes were "yet another worrisome sign of violence potentially spiraling out of control." He added that demolishing Palestinian homes could "inflame tensions still further" after Israel destroyed two houses owned by Palestinians who allegedly attacked Israelis last year. The U.N. chief called for "urgent action by both sides" to curb the violence including through security cooperation.

The tensions are still high as the two peoples continue to consider each other as a threat. A Palestinian woman stabbed an Israeli man who then shot and wounded her in Jerusalem's Old City on Wednesday. Police spokeswoman Luba Samri said the "female terrorist" stabbed an Israeli man from behind in his upper body, lightly wounding him. The man drew his gun and fired, wounding her seriously, Samri said. Both have been taken to a hospital.

A relative of one of five Palestinians arrested by Israel over the killing of an Israeli couple in the West Bank says troops took measurements of their homes in an apparent prelude to demolishing them. Ayman Masri, whose nephew was among those arrested, says Israeli troops raided five homes in the West Bank city of Nablus on Wednesday. Palestinian official Qadura Fares says another five were raided elsewhere. Israel's military had no immediate comment.Peace between Israel and Palestine has been and will likely be hard to achieve and will only be made more difficult by Israel's attitude toward the situation surrounding the holy site in East Jerusalem, with clashes continuing between Israelis and Palestinians, further triggering social unrest that could threaten peace in the Middle East. Since the Israeli occupation of the West Bank, East Jerusalem and the Gaza Strip in June 1967, the Jordanian government, known as the Waqf, has been running the holy site. The compound is allowed for Muslim prayer alone, however, Jewish Israeli visitors are also allowed into the site under the surveillance of Israeli police. After, Israel's former Prime Minister Ariel Sharon's visit to the Temple Mount was seen as provocative and led to the second intifada in September 2000 and sparked the already tense conflict between Israel and Palestinians.

Tensions flared up between Israelis and Palestinians after Israel announced its expansion of an "illegal" settlement project that includes establishing major constructions in the area as well as a planned increase in the number of Jewish settlers in the occupied territories. The Palestinian district of East Jerusalem was captured by Israel during the 1967 six-day war and since then Israel has tried to expand its influence over the neighborhood by allowing Jewish settlers to reside in the disputed area. Israeli aggression does not appear only in Jerusalem but also in Gaza Strip. During the Israeli attacks more than 2,100 Palestinians died, including many civilians, according to Palestinian and U.N. officials.