Obama apologizes to Doctors Without Borders for deadly Kunduz airstrike 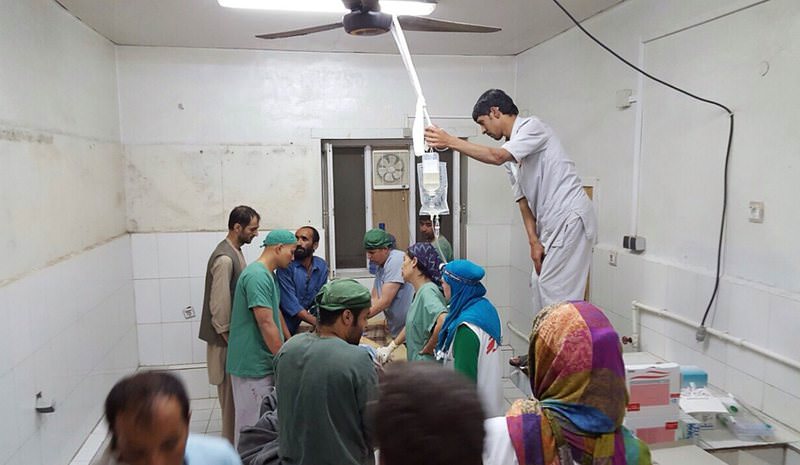 by daily sabah
Oct 08, 2015 12:00 am
US President Barack Obama on Wednesday apologized to Doctors Without Borders (MSF) for a deadly US air strike on an Afghan hospital, as the medical charity demanded an international investigation.

Three separate probes -- by the US military, NATO and Afghan officials -- are under way into Saturday's catastrophic strike in the northern Afghan city of Kunduz which left 22 people dead.

The US military has offered a series of shifting explanations for the bombing raid, from initially talking about "collateral damage" to now admitting, as Obama did in his call to MSF chief Joanne Liu, that the strike was a mistake.

One report said the top US and NATO commander in Afghanistan thought American forces had broken their own rules of engagement in carrying out the strike, which sparked international outrage.

Obama called Liu to "apologize and express his condolences for the MSF staff and patients who were killed and injured when a US military airstrike mistakenly struck an MSF field hospital in Kunduz," White House spokesman Josh Earnest said.

The president told Liu of his "great respect" for MSF's work and assured her that the Pentagon probe would "provide a transparent, thorough and objective accounting of the facts and circumstances of the incident," Earnest said.

Obama also called Afghan President Ashraf Ghani to express his condolences and commended the "bravery" of Afghan forces battling to secure the city of Kunduz from Taliban fighters.

He also said he looked forward to working with Ghani and the Afghan government to "support their efforts to provide security for the Afghan people," the White House said.

But the charity, which condemned the attack as a war crime, stressed the need for an international inquiry, saying the bombing raid was in contravention of the Geneva Conventions.

"We cannot rely on an internal military investigation," Liu told reporters in Geneva, insisting that the International Humanitarian Fact-Finding Commission should probe the bombing.

"This cannot be tolerated."

MSF's US chief Jason Cone later called on Obama to consent to the commission, which he said would "send a powerful signal of the US government commitment to... international humanitarian law and the rules of war."

The fact-finding commission, which was officially constituted in 1991, requires a request by one of the 76 signatory nations to begin its work, according to its website.

Liu's remarks come a day after General John Campbell, the top US and NATO commander in Afghanistan, said the "hospital was mistakenly struck" when Afghan officials called for the raid.

But MSF brushed aside that explanation, saying "a mistake is not an answer for us" and insisting on knowing "the facts, the intention, the criteria" behind the raid, which lasted more than an hour.

International aid groups, the United Nations and a growing tide of global revulsion have added to the pressure on Washington to come clean over the strike, which came days after the Taliban overran Kunduz.

The strike killed 12 MSF staff and 10 patients, prompting the charity to close the trauma center, seen as a lifeline in a war-battered region with scant medical care.

"One of my family members has a bullet stuck in his leg," Zabihullah, a local resident, told AFP, adding that another relative had a wound that "hasn't been stitched yet."

"But with no good hospital, where can we possibly go for treatment?"

The New York Times on Tuesday, citing officials close to Campbell, said US special forces in Kunduz were unable to verify whether the hospital was a legitimate target before the bombs were dropped.

Under US rules of engagement, air strikes are called in to eliminate insurgents, protect American troops and assist Afghans who request air support.

But the US special forces on the ground most likely did not ensure that the required strike met any of those criteria, Campbell said in private discussions with his colleagues, according to the report.

In testimony to the US Congress on Tuesday, Campbell stressed that while it was the Afghans who called for the strike, ultimately the decision to launch rested with Americans.

His remarks provoked no immediate response from Afghan officials, but they have previously claimed that insurgents were using the hospital as a position to target troops and civilians.

A Taliban official told AFP that militants visited the hospital to reassure staff that they would not be harmed but left the facility 12 hours before the bombing.

Campbell has urged Washington to consider boosting its post-2016 military presence to repel a Taliban upsurge and stabilize a "tenuous security situation" in the war-ravaged nation.

The White House is reviewing whether to press ahead with plans for the final exit of US troops by late 2016, the end of Obama's presidency, and leave an embassy-based force of about 1,000 in Afghanistan.

US forces in Afghanistan currently stand at about 9,800. Campbell said Obama has provided him with "flexibility" to slow the drawdown.