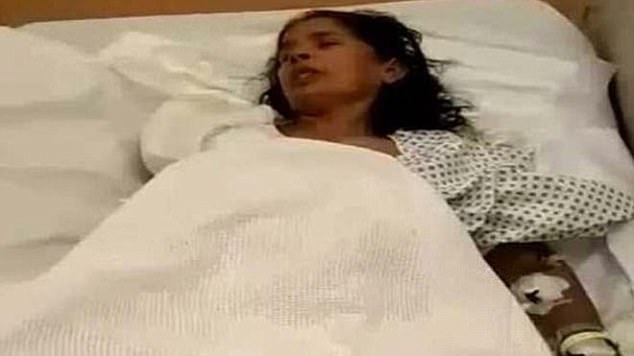 by Daily Sabah with Reuters
Oct 09, 2015 12:00 am
India's foreign ministry called on Saudi Arabia on Friday to ensure swift justice after a Saudi employer was accused of chopping off the arm of an Indian housemaid working in Riyadh.

The family of Kasthuri Munirathinam, 58, said she told them her employer hacked off her right arm after she complained about harassment and torture after three months of working in the household.

Television pictures showed the victim, from the southern state of Tamil Nadu, lying in a Riyadh hospital with a large white bandage wrapped around the stump of her right shoulder.

"Ever since she went to work with this family in July, things were not alright. My mother was not even allowed to speak to us over the phone, she was not given proper food and was forced to work long hours," the woman's son told BBC.

"When she tried to escape the harassment and torture, her right arm was chopped off by the woman employer. Now my sister can't even sit and do simple things on her own, as her spinal cord has also been injured," the victim's sister added.

"We are very disturbed over the brutal manner in which the Indian lady has been treated in Saudi Arabia," Foreign Minister Sushma Swaraj tweeted. "This is unacceptable. We have taken this up with Saudi authorities."

Foreign ministry spokesman Vikas Swarup said Indian embassy officials had visited Munirathinam in hospital where her condition was stable and also urged Saudi police to lodge a case of attempted murder against the employer.

"The sponsor should be also directed to pay for (the victim's) on-going treatment. The police chief assured us of a speedy and fair investigation," Swarup said in a statement.

"We continue to pursue the matter at all levels with Saudi officials to ensure speedy justice for her."

Last month, the foreign ministry faced criticism from women's rights activists after a Saudi diplomat accused of repeatedly raping and torturing two Nepali maids in his home outside Delhi was allowed to leave the country.

The women told police they were gang raped, assaulted, tortured and starved while held captive for over three months. The women said they were raped by eight men on one occasion with medical examinations showing evidence of rape and sodomy.

Citing the diplomatic immunity under the Vienna Convention, Indian officials said that Majed Hassan Ashoor, the first secretary at the Saudi embassy, had left India.