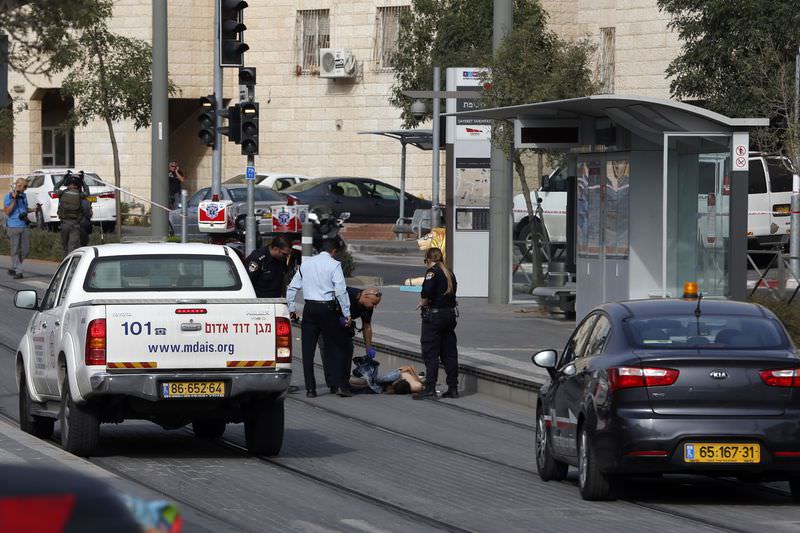 by Daily Sabah with Wires
Oct 12, 2015 12:00 am
Footage emerged on Monday showing an Israeli onlooker swearing at an injured Palestinian boy, while another asked the police to shoot the boy.

The boy is believed to be 14-year-old Muhammad Manasra who had been injured in a clash earlier, along with 12-year-old Ahmad.

The video uploaded to social media by an Israel man, shows Israeli settlers saying: "Die, son of a b***h!" while asking police to shoot the boy, who is clearly in pain and asking for help.

Merely hours before the incident, a Palestinian teenager, reportedly a schoolgirl, was shot and seriously injured in East Jerusalem near the Israeli police headquarters.

The same day, a 16 year-old and a 20-year-old Palestinian were shot dead by Israeli police in Monday's protests.

The attack took place in Pisgat Zeev, a Jewish settlement in traditionally Arab east Jerusalem, which Israel occupied in the 1967 Mideast war.

Following images may be disturbing to some viewers. Viewer discretion is advised

According to figures provided by the Palestinian Health Ministry, Monday's death brings the total number of Palestinians killed by Israeli security forces in October to 25.

Frustrated Palestinian youths have defied president Mahmud Abbas as well as an Israeli security crackdown by taking part in protests in annexed east Jerusalem and the occupied West Bank, since October 3 when Israeli-Palestinian clashes began.

"Israel is provoking violence in Jerusalem and creating a situation of instability as cover to exercise control over the Al-Aqsa Mosque [Islam's third holiest site], transform the character of Jerusalem, annex more Palestinian land and step up its illegal settlement-building activities," she said.

After a Sunday cabinet meeting, Netanyahu said the Al-Aqsa Mosque was at the center of the violence, going on to assert that recent Palestinian knife attacks were a result of "incitement" by Palestinian groups.

Netanyahu also called for an investigation of Hanin Zoabi, a Palestinian lawmaker in Israel's parliament who reportedly called for a popular Palestinian uprising in a recent interview with a Hamas-linked publication.
Last Update: Oct 12, 2015 10:09 pm