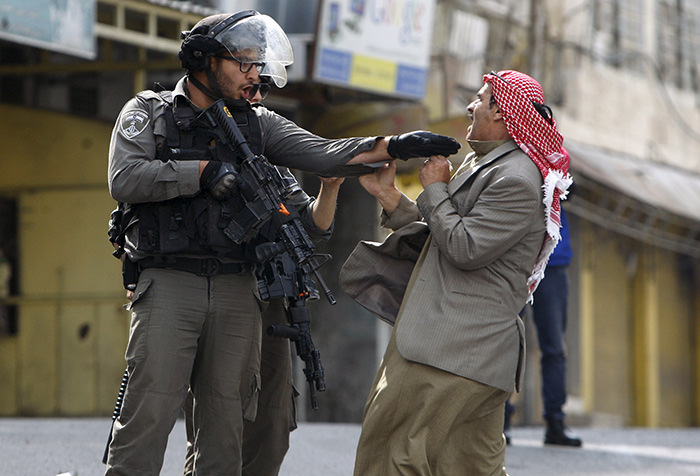 A Palestinian man argues with an Israeli border policeman during clashes in the West Bank city of Hebron October 10, 2015 (Reuters Photo)
by daily sabah
Oct 12, 2015 12:00 am

A video shows a group of journalists assist an elderly Palestinian man who collapsed and was left on the ground on Saturday, as he attempted to stop Israeli soldiers from firing at children and protesters, during the funeral of Mohammed Fares Mohammed Abdullah al-Japari, who was killed on Friday by the Israeli police forces.

After the funeral a crowd of mourners were reportedly holding a demonstration against the Israeli occupation. Israeli soldiers are seen in the footage firing tear-gas and rubber coated steel bullets on the crowd, which included children.

During the clashes, an elderly Palestinian man, who was identified as Ziyad Abu Hlayel, from Hebron, attempted to stop the Israeli soldiers saying, "I am not leaving. Don't you feel ashamed, firing at children with this weapon? It's not okay. Take your soldiers and get out of here. Don't fire!"

The soldiers continued firing as the man attempted to block their way shouting, "Don't fire at children. Shame on you! Shame on you! I am not leaving. What do you want more! Today two of us were killed. Do you want to kill more? Don't you feel ashamed?"

The man is seen collapsing in the video as a result of, reportedly, being hit by two rubber bullets, in addition to being pepper sprayed.

A 13 year-old Palestinian boy was shot dead by Israeli forces during a clash at a checkpoint north of the West Bank city of Ramallah on Sunday, in addition to approximately 20 Palestinians wounded by rubber bullets.

In recent attacks by Israeli soldiers on Palestinians more than 20 people have been killed, including a 30-year-old pregnant Palestinian woman and her 2-year-old daughter who was killed on Sunday after Israel attacked two targets in Gaza.
Last Update: Oct 12, 2015 4:58 pm