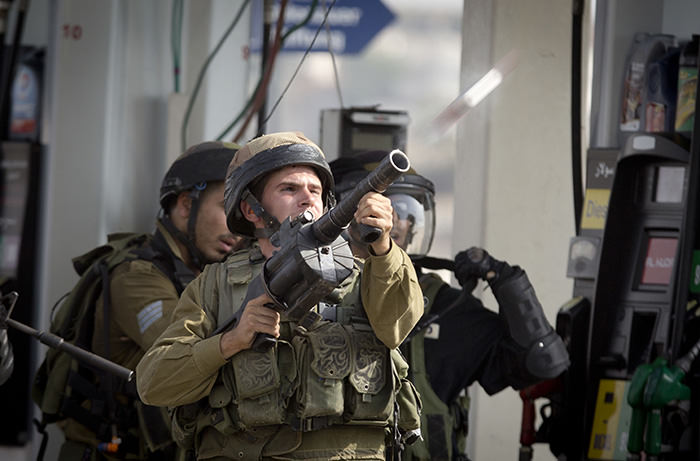 A wave of Israeli-Palestinian violence showed no signs of abating yesterday with multiple attacks killing at least four people and wounding dozens.

A pair of Palestinian men reportedly boarded a bus in Jerusalem and began shooting and stabbing passengers while another Palestinian assailant rammed a car into a bus station before stabbing bystanders in near-simultaneous attacks yesterday. On Monday, Israeli security forces shot dead two Palestinians, as a series stabbing attacks continued in Jerusalem. Israeli police spokesman Micky Rosenfeld said that two Palestinians were shot and one of them was killed after allegedly stabbing two Israelis, who were seriously injured, in a settlement in East Jerusalem. Earlier, a 17-year-old Palestinian was shot dead after allegedly trying to stab an Israeli police officer at the Old City of Jerusalem's Lion's Gate, the site of several previous knife attacks. Palestine's Ma'an news agency reported that Israeli security forces shot the Palestinian man multiple times. Israeli police shot and injured another Palestinian woman after she allegedly tried to stab an officer near their headquarters in East Jerusalem.

A recent wave of Palestinian knife attacks in Jerusalem and elsewhere in Israel has prompted Israeli authorities to step up security, with Israeli Prime Minister Benjamin Netanyahu ordering the deployment 16 battalions of the paramilitary border police. Jerusalem's teeming Old City, in particular, has seen a significant increase in the presence of security forces, with troops stationed on rooftops and at numerous checkpoints throughout the city, especially near the homes of Israeli settlers. Recent days have also seen frequent clashes in the occupied West Bank and East Jerusalem between Palestinian youth and Israeli security forces.

Footage that emerged Monday showing an Israeli onlooker swearing at an injured Palestinian teenager while another asked the police to shoot him sparked outrage. The teen is believed to be Muhammad Manasra, 14, who had been injured in a clash earlier, along with a 12-year-old named Ahmad. The boy was on the ground bleeding and waiting for medical help as Israeli settlers were abusing him. The video, uploaded to social media by an Israel man, shows Israeli settlers shouting: "Die, son of a bitch!" while asking police to shoot the teen, who is in pain and asking for help. He had no knife on him in the video and soldiers were trying to stop the ambulance from reaching him.

The same day, a 16-year-old and a 20-year-old Palestinian were shot dead by Israeli police in Monday's protests. The attack took place in Pisgat Zeev, a Jewish settlement in traditionally Arab East Jerusalem, which Israel occupied in the 1967 Six-Day War. Earlier, Israeli forces had shot and killed Mustafa Adel al-Khatib, 18, after he allegedly attempted to stab a border police officer.

According to figures provided by the Palestinian Health Ministry, Monday's deaths bring the total number of Palestinians killed by Israeli security forces in October to 25. Human Rights Watch (HRW) on Sunday released a statement saying that the use of live ammunition against protesters, unless in self-defense, was unlawful. The group made the assertion after one of its researchers was struck by a rubber bullet during a protest in the West Bank.

Peace between Israel and Palestine has been and will likely be hard to achieve and will only be made more difficult by Israel's attitude toward the situation surrounding the holy site in East Jerusalem, with clashes continuing between Israelis and Palestinians, further triggering social unrest that could further threaten peace in the Middle East. Since the Israeli occupation of the West Bank, East Jerusalem and the Gaza Strip in June 1967, the Jordanian government organization known as the Waqf has been running Islamic holy sites. The Al-Aqsa Mosque compound is allowed for Muslim prayer alone, however, Jewish Israeli visitors are also allowed into the site under the surveillance of Israeli police. Israel's former Prime Minister Ariel Sharon's visit to the Temple Mount was seen as provocative and led to the second intifada in September 2000 and re-sparked the already tense conflict between Israel and Palestinians.

Tensions flared up between Israelis and Palestinians after Israel announced its expansion of a settlement project, considered illegal by international law, that includes major construction in the area as well as a planned increase in the number of Jewish settlers in the occupied territories. The Palestinian district of East Jerusalem was captured by Israel in the Six-Day War and since then Israel has tried to expand its influence over the neighborhood by allowing Jewish settlers to live in the disputed area. This comes after last year's Israeli attacks in the Gaza Strip when more than 2,100 Palestinians died, including many civilians, according to Palestinian and U.N. officials.
Last Update: Oct 13, 2015 9:39 pm