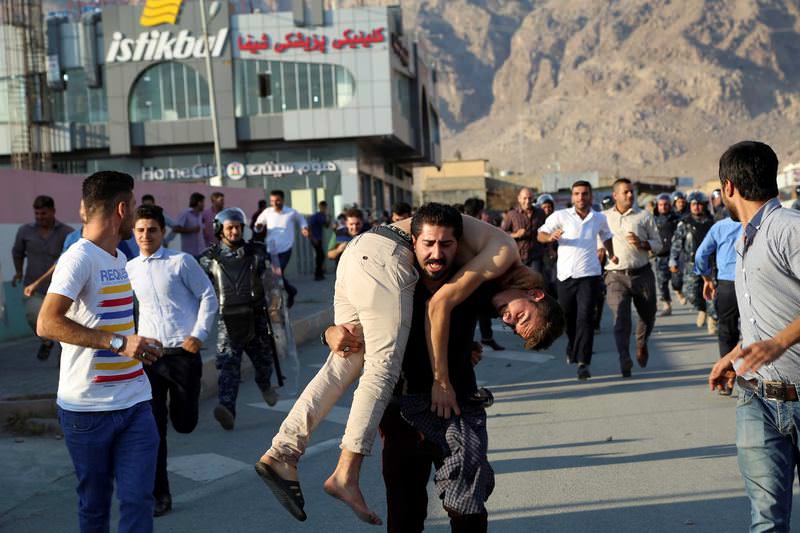 Iraqi Kurdish opposition party Gorran said on Sunday its top politicians have been allegedly asked by the party of acting regional president Masoud Barzani to leave the capital, Irbil. The move came amid a wave of violent protests against Barzani in southern opposition strongholds, which Barzani's Kurdish Democratic Party (KDP) accuses Gorran of fomenting. At least four people were killed on Saturday and Sunday in a string of protests that have spread to most major towns in the south of the autonomous region in recent days. Protesters attacked several offices of the main political party in Iraq's Kurdish north on Saturday in a third day of violent unrest that threatens to destabilize the region at a time of war with ISIS militants.

The demonstrations that began on Oct. 1 initially targeted the autonomous region's government, which many Kurds blame for an economic crisis that has left them struggling to pay the bills. But the anger took a partisan turn on Friday when protesters in the city of Qaladize torched an office of the Kurdistan Democratic Party (KDP) after at least one demonstrator was killed. The region's president, Massoud Barzani, called for calm but young men blocked a main road in the town of Said Sadiq on Saturday and pelted a KDP building with stones, said Farouq Abd al-Karim, a local party member who was present. Live footage from Said Sadiq broadcast on Kurdish channel NRT showed riot police holding back protesters, some of whom wielded slingshots. Shops were shuttered and a tire burned in the street. There were also protests in the city of Sulaimaniyah and the town of Kalar, where demonstrators threw stones at a KDP office.

The pattern of unrest reflects long-running political divisions in the autonomous region of three provinces that have been exacerbated by a power struggle over the presidency of Barzani, who is also head of the KDP. Sulaimaniyah province, where the protests are taking place is dominated by the Patriotic Union of Kurdistan (PUK) party and former opposition movement Gorran, which is seeking to weaken the KDP's grip on power. In Irbil and Duhok, where the KDP is strong, security was tightened around offices of the PUK and Gorran to avert any retaliatory attacks. The KDP, Gorran, PUK and two of the region's other parties have been wrangling over the terms of an extension of Barzani's tenure since it expired on Aug. 20.

The autonomous region's parliament speaker and ministers from the Gorran party were asked by the KDP to leave the Kurdish capital, a statement said. "The KDP politburo used its representatives in parliament and government to inform the president of parliament and the Gorran ministerial team that they must not attend their places of work and must leave our regional capital," Gorran's statement said. Gorran is the second largest bloc in parliament. "I condemn the recent violence and I mourn the loss of innocent lives. This was a deliberate plan by Gorran activists to incite hatred and violence," said Masrour Barzani, the region's intelligence chief and also the president's son. The 69-year-old has headed the KDP, one of the two historical Iraqi Kurdish parties, since 1979 and been president of the autonomous region since 2005. The prime minister of the autonomous region is Barzani's nephew, Nechirvan Barzani.

Kurdish security forces stopped the speaker of the parliament from entering Irbil. Speaker Yousif Mohammed's personal assistant said forces loyal to the Kurdistan Democratic Party (KDP) had turned him back on the road from Sulaimaniyah to Irbil, where the regional parliament is located. The KDP, which controls Irbil, accuses the Gorran party, to which the speaker belongs, of provoking violent protests in which five people died. "He has been prevented by KDP forces and he's now returned [to Sulaimaniyah]," said the speaker's personal assistant Daroun Rahim. "It's a very dangerous development."

On Saturday, the Irbil staff of Sulaimaniyah-based TV station NRT were detained and driven from the region by security forces loyal to the KDP, AFP reported. The channel said in a statement that its office in Dohuk, the other major city in the Kurdish region was also shut down. "NRT asks the representatives of foreign countries in the Kurdish region, all organizations and political parties, and the people of Kurdish region to raise their voices against these abuses," it said. Barzani has been accused by critics of amassing huge wealth for his family instead of serving the population. He served two terms and the two-year extension Kurdish parties agreed to in 2013, which expired on Aug. 19, leaving the region in an institutional vacuum. Barzani wants to stay on, arguing that his leadership is required to steer the region as its peshmerga forces play a significant role in battling ISIS militants.
Last Update: Oct 13, 2015 4:42 pm