US to hold off on withdrawal of 9,800 troops in Afghanistan through 2016 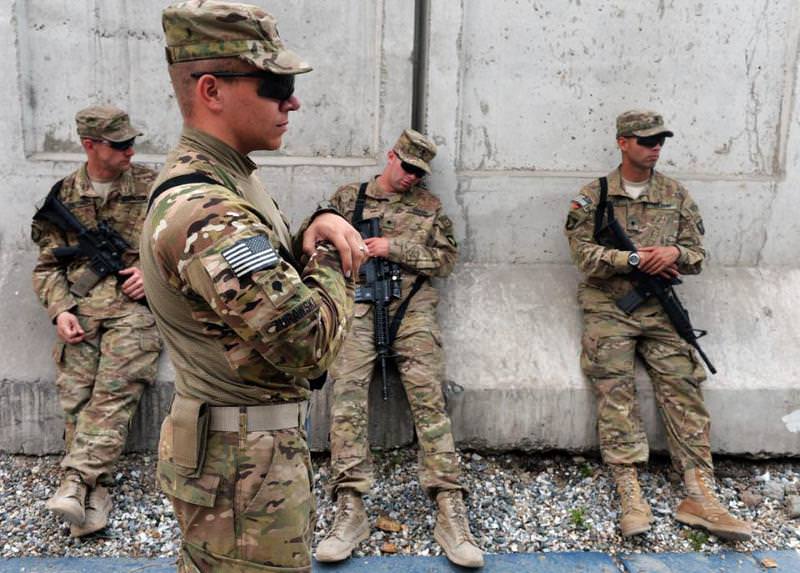 US soldiers take a break after an award ceremony at Forward Operating Base, Finley Shields in Jalalabad in Nangarhar province on April 6, 2013 (AFP Photo)
by Anadolu Agency
Oct 15, 2015 12:00 am
President Barack Obama said Thursday that he would keep 9,800 U.S. troops in Afghanistan through next year.

"I have decided to maintain our current posture of 9,800 troops in Afghanistan through most of next year, 2016," Obama announced at a White House pess conference, citing security risks by Daesh and Pakistani al-Qaeda infiltration.

The president also decided to keep 5,500 troops in Kabul and a few bases, including at Bagram, Jalalabad in the east, and Kandahar in the south, during the same time frame.

"Our troops will continue to pursue those two narrow tasks that I outlined earlier: training Afghan forces and going after al Qaeda," he added.

Afghan forces supported by U.S. airstrikes regained control of the city last week. During the battle a U.S. airstrike mistakenly targeted a hospital operated by Doctors Without Borders, killing 12 of the organization's staff and 10 patients.

Obama previously indicated that he wanted to reduce to 1,000 the troop level in Afghanistan through 2016 but military leaders and Congress have expressed concerns that the withdrawal of remaining forces would lead to a collapse of the security structure there.

"Pressure from Pakistan has resulted in more al Qaeda coming into Afghanistan, and we have seen the emergence of an ISIL presence. The bottom line is, in key areas of the country, the security situation is still very fragile," said the president.

Obama said he would also work with U.S. coalition partners and NATO allies in Afghanistan to support his decision "with their own presence in Afghanistan after 2016".

He also said he would urge Pakistani Prime Minister Navaz Sharif and all parties in the region "to press the Taliban to return to peace talks and to do their part in pursuit of the peace that Afghans deserve".

Defense Secretary Ash Carter said 5,500 troops will be positioned in different locations based on assessments with coalition partners.

He said the troop level was determined based on consultations with coalition partners and considerations about the U.S. defense budget.

"This is our best guess and certainly with our advice to the president for what would be sufficient and a good basis for planning for 2017," he said.

"We will reduce our footprint in Afghanistan but not our commitment to the country and its people," he added.

Alongside a coalition of 42 nations under the umbrella of NATO, the U.S. intervened in Afghanistan in early 2002 following the Sept. 11 terror attacks.

With an initial troop presence of more than 100,000 in Afghanistan, Obama gradually reduced forces to 9,800 after taking office in 2009.