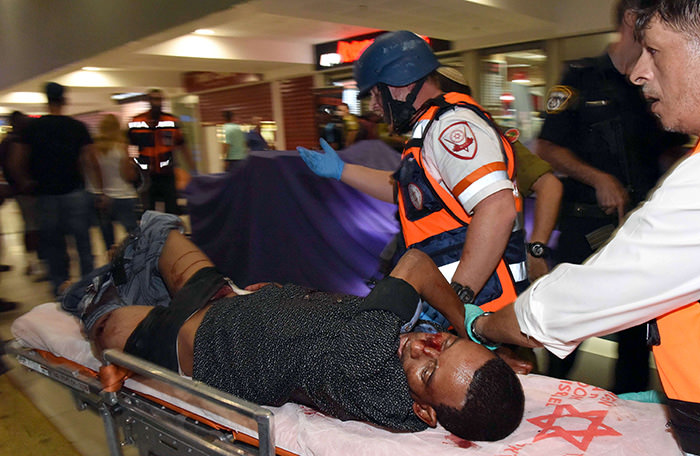 A wounded Eritrean man who later died of his wounds, is evacuated at the main bus station in the southern Israeli city of Beersheva on October 18, 2015 (AFP Photo)
by Daily Sabah with AFP
Oct 21, 2015 12:00 am
Images of an Eritrean asylum seeker lying in a pool of blood as an angry mob kicks him has renewed debate in Israel over alleged racism and how to respond to violence.

Habtom Zarhum, 29, was shot by a security guard this week at a bus station in the southern city of Beersheba after being mistaken for an assailant in an attack that killed an Israeli soldier.

He later died of his injuries.

Footage of Zarhum bleeding as an angry mob rains blows on his head and torso has spread rapidly on social media, prompting soul searching among Israelis over their response to a wave of attacks as well as their treatment of African migrants.

Neta Singer, who worked with Zarhum, remembered how he liked to sing and dance, and how he would send his entire monthly salary back to his family.

He never complained, she said.

"If I could ask him to forgive all the evil that was done to him, I know he would forgive it," Singer insisted, adding the traditional Jewish eulogy: "May his memory be a blessing."

Zarhum's autopsy ruled he died of gunshot wounds, rather than the vicious beating he received from bystanders as police officers looked on.

His death comes in the middle of a surge of violent attacks across Israel and the occupied West Bank that has seen at least 47 Palestinians killed by the Israeli forces.

Eight Israelis have also died, and the attacks have put intense pressure on Israeli Prime Minister Benjamin Netanyahu to stem the violence.

Following Zarhum's death, Netanyahu publicly called on Israelis not to take justice into their own hands, but many see the young man's killing as part of a wider problem in Israel's treatment of African asylum seekers.

Sari Bashi, the Israel/Palestine director at Human Rights Watch, called the death a "tragic but foreseeable outgrowth of a climate in which some Israeli politicians encourage citizens to take the law into their own hands".

Those close to Zarhum say he once served as a pilot in Eritrea's air force before fleeing his homeland's dictatorship to Sudan.
He arrived in Israel four years ago, finding work at a nursery in the Ein Habesor kibbutz in southern Israel's desert Negev region, where he lived.

On Monday evening, migrants at the Holot detention centre held a vigil in Zarhum's memory. There are plans to hold a similar event on Wednesday evening in Tel Aviv, which has a large African minority.

Eritrea's ambassador to Israel, which has been strongly condemned by rights groups for its treatment of African migrants, has called for an inquiry into Zarhum's death.

"We are in contact with relatives," the embassy told AFP, adding that his body will be "repatriated to Eritrea after the Israeli police release it".

Meanwhile, United Nations Secretary General has arrived in Jerusalem on Tuesday, calling both Israeli and Palestinean sides for calm amid clashes.

In Jerusalem late Tuesday, Ban condemned harsh Israeli security measures saying that they could be "counterproductive" if they only breed more "frustrations and anxieties" among Palestinians.

"Israelis and Palestinians stand on the brink of another catastrophic period of violence. We need to keep the situation from escalation into a religious conflict, with potential regional implications," he warned.