Russia killed 446, including 38 children in airstrikes on Syria: watchdog 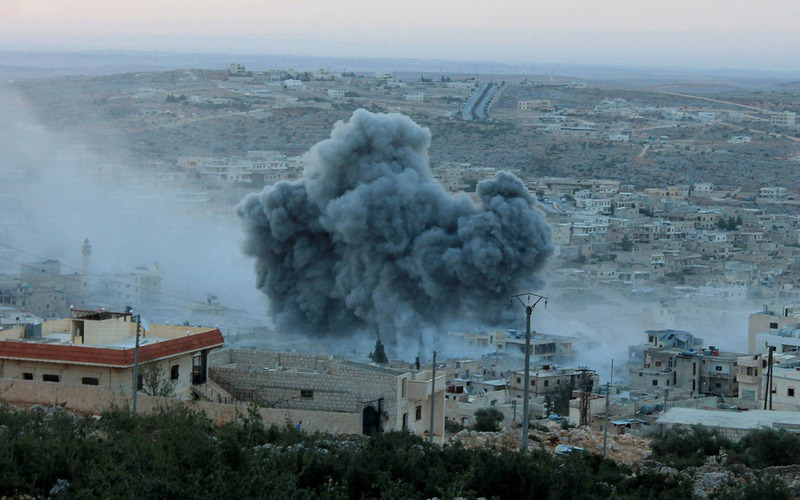 by Daily Sabah with AFP Oct 23, 2015 12:00 am
Russian airstrikes in Syria have killed at least 446 people, more than a third of them civilians, since it began end-September, the Syrian Observatory for Human Rights said Friday.

Meanwhile, fresh attacks on a flashpoint town in the centre of the country by either Russian or regime planes killed at least 14 civilians, nearly half of them children, the Britain-based Observatory added.

Russia launched its air-war on Syrian dictator Bashar al-Assad's opponents, saying it was targeting ISIS militants and other "terrorists".

Of the total killed since then, 151 are civilians, including 38 children and 35 women, Observatory chief Rami Abdel Rahman said.

The strikes have also killed 295 combattants, including 75 ISIS terrorists and 31 members of Al-Qaeda's Syrian affiliate, the Al-Nusra Front, he said.

The Observatory relies on a network of activists, medical staff and fighters on the ground who say they identify Russian warplanes based on model, flight patterns and munition types.

In Friday's attack on the town of Talbisseh, in Homs province, Abdel Rahman said six children and five women were among the dead.

The source of the fire was unclear, but Russian and government planes have been conducting strikes in the area.

Russia's air force has been backing army ground operations in the coastal province of Latakia which is the stronghold of the Assad regime, Aleppo in the north and Homs and Hama in the centre.

A US-led coalition has also conducted more than a year of airstrikes in Syria in its war against ISIS.

Talbisseh, which lies on the Homs-Hama highway, is controlled by non-ISIS rebel forces and Al-Nusra Front.

Russian warplanes on Friday struck targets in eastern parts of Hama province, southern battlefronts in Aleppo province, and parts of the regime bastion of Latakia province, the Observatory said.

Despite the strikes on Aleppo, ISIS militants cut off a key regime supply route between there and Homs to the south, Abdel Rahman said.

The terrorists are fighting Assad regime forces near Aleppo, around the Kweyris military airport, and along the vital route, which the regime uses to send reinforcements north from Homs province.

"ISIS first seized 12 kilometres (six miles) of the road before being pushed back, and they now control at least five or six kilometres," Abdel Rahman told AFP.

He said at least 16 ISIS fighters had been killed but that he did not have information on government casualties.

A military source told AFP the road had been cut "during an attack by Daesh fighters at dawn," using the Arabic acronym for the ISIS terrorist organization.

He said troops had withdrawn from six points along the battlefront and were waiting for reinforcements from other areas.

ISIS said in a statement online that it "cut the regime's supply route to Aleppo" by seizing eight checkpoints along the road, after beginning its assault with two suicide bombers.

Late Thursday, more than a dozen Russian raids on the ISIS capital, Raqqa killed at least 18 people, 11 of them ISIS terrorists, said the Observatory.

"Seven civilians, including two children, were killed in strikes by Russian planes," and 11 ISIS members were killed in raids on several ISIS bases in the city, the monitor said.

It added that more than 30 people were wounded.

Russia has been criticised by rebel groups and their backers for targeting non-militant groups and inflicting civilian casualties, and has been accused of hitting hospitals and field clinics.

Moscow has dismissed previous reports by the Observatory of civilian casualties from its bombings as "fake".
Last Update: Oct 23, 2015 8:33 pm
RELATED TOPICS