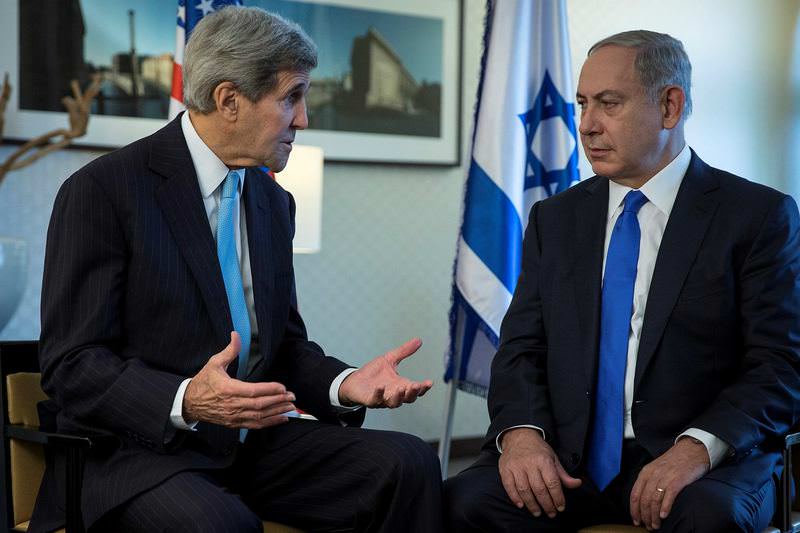 After holding talks with Israeli Prime Minister Netanyahu, U.S. Secretary of State Kerry urged both the Israeli and Palestinian sides to calm as tensions remain high while the White House criticized Netanyahu over his recent talk that linked Palestinians to Holocaust

The White House warned Israeli Prime Minister Benjamin Netanyahu against "inflammatory rhetoric" Thursday after the Israeli prime minister claimed a Palestinian religious leader provoked the Holocaust. Netanyahu on Tuesday suggested Hitler was not planning to exterminate the Jews until he met Grand Mufti of Jerusalem Haj Amin al-Husseini, a Palestinian nationalist, in 1941. Responding sharply to the controversial claim, since pedaled back by the Israeli leader, White House spokesman Eric Schultz said, "I don't think there's any doubt here at the White House who is responsible for the Holocaust that killed six million Jews." "We here continue to stress publicly and privately ... the importance of preventing inflammatory rhetoric, accusations or actions on both sides (that) can feed the violence." "We believe that inflammatory rhetoric needs to stop." Netanyahu's comments were widely criticized, with Palestinian leaders and the Israeli opposition accusing him of distorting the past, while historians called them inaccurate. Asked about Netanyahu's comments, Steffen Seibert, spokesman for German Chancellor Angela Merkel, said there was "no reason to change our view of history". "All Germans know the history of the murderous race mania of the Nazis that led to the break with civilization that was the Holocaust," he said. "This is taught in German schools for good reason, it must never be forgotten and I see no reason to change our view of history in any way. "We know that responsibility for this crime against humanity is German and very much our own," she added.

Despite the criticism from White House, U.S. Secretary of State John Kerry on Thursday expressed a "cautious measure of optimism" following a four-hour meeting with Netanyahu about proposals that could help defuse the deadly wave of recent violence in Israel. Kerry, his voice hoarse after an overnight flight and the lengthy talks, told reporters that he planned to raise the proposals with Palestinian President Mahmoud Abbas and Jordan's King Abdullah in meeting Saturday in Jordan's capital, Amman. "I come directly from several hours of conversation with Prime Minister Netanyahu and I would characterize that conversation as one that gave me a cautious measure of optimism that there may be some things that may be in the next couple of days put on the table which would have an impact I hope," Kerry said. "I don't want to be excessive in stating that, but I am cautiously encouraged." Before their talks, both Kerry and Netanyahu condemned the wave of Palestinian attacks on Israelis. Kerry urged an end to all incitement and violence. Netanyahu repeated earlier accusations that Abbas was to blame, saying the Palestinian leader was "spreading lies" about Israel and the status of the holy site at the center of the tensions. "There is no question this wave of attacks is driven directly by incitement, incitement by Hamas, incitement from the Islamist movement in Israel and incitement, I am sorry to say, from President Abbas and the Palestinian Authority," Netanyahu told Kerry. "I think it is time for the international community to say clearly to President Abbas to stop spreading lies about Israel," he said. "Lies that Israel wants to change the status quo at the Temple Mount, lies that Israel wants to tear down the Al-Aqsa Mosque, lies that Israel is executing Palestinians. All of that is false."

Netanyahu said Israel was committed to keeping the status quo at the Jerusalem site, known to Jews as the Temple Mount, the holiest site in Judaism and home to the biblical temples. For Muslims, it is the Noble Sanctuary, home to the Al-Aqsa Mosque, the third-holiest site in Islam and a national symbol for the Palestinians. The site, captured by Israel from Jordan in the 1967 Mideast war, is a frequent flashpoint of violence. The Palestinians accuse Israel of trying to change the status quo at the site, which allows Jews to visit but not to pray. They point to a growing number of Jewish visitors who seek an expanded Jewish presence and prayer rights at the site. Netanyahu rejected those claims and said ending incitement was the only way to ease tensions. "To generate hope, we have to stop the terrorism," he said. "To stop the terrorism, we have to stop the incitement and I think it's time the international community told President Abbas to stop the incitement and hold him accountable for his words and his deeds." Kerry was more circumspect and did not single out Abbas for blame. But he also did not address Netanyahu's Holocaust comments. "We have to stop the incitement, we have to stop the violence," Kerry said. He said he had spoken to Abbas and Abdullah, who is charged with overseeing the Jerusalem site, in the past day and both assured them of their commitment to calm. "I believe people want this to de-escalate," he said.

Peace between Israel and Palestine has been and will likely be hard to achieve and will only be made more difficult by Israel's attitude toward the situation surrounding the holy site in East Jerusalem, with clashes continuing between Israelis and Palestinians, further triggering social unrest that could threaten peace in the Middle East. Since the Israeli occupation of the West Bank, East Jerusalem and the Gaza Strip in June 1967, the Jordanian government, known as the Waqf, has been running the holy site. The compound is allowed for Muslim prayer alone, however, Jewish Israeli visitors are also allowed into the site under the surveillance of Israeli police. After, Israel's former Prime Minister Ariel Sharon's visit to the Temple Mount was seen as provocative and led to the second intifada in September 2000 and sparked the already tense conflict between Israel and Palestinians.
RELATED TOPICS