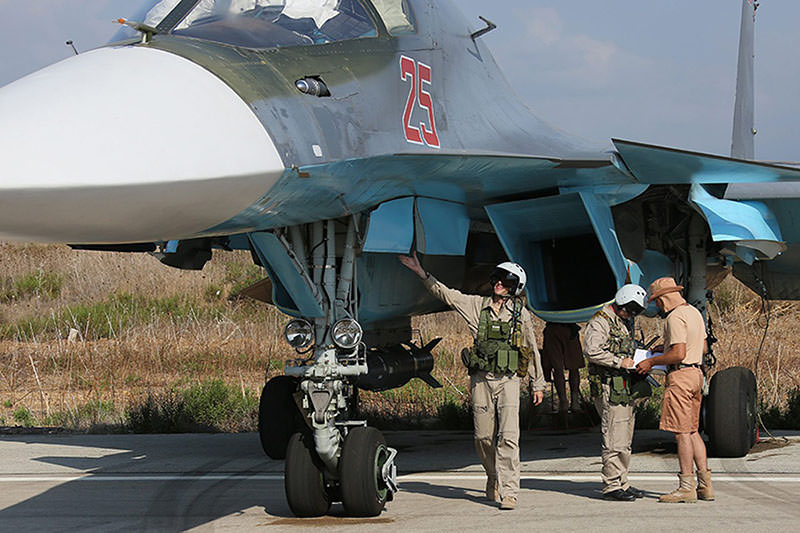 Russian pilots of SU-34 bomber checking their plane before the flight at the Syrian Hmeymim airbase, outside Latakia, Syria (EPA photo)
by Anadolu Agency Nov 02, 2015 12:00 am
The Russian government is running a massive media campaign to court public opinion in support of its military campaign in Syria.

"It is an information war on an unparalleled scale," commented Lithuanian analyst Vitoldas Jancis on the Lithuanian Tribune's website on Jul 30.

The government's purpose is to project an image of the Russian army's pursuing high-tech warfare with great accuracy and without suffering many losses, policy expert Julia Smirnova noted in the German newspaper Die Welt on Oct 18.

"The news channels cover this as a virtual war taking place regularly on their television screens. The aim is to calm public fear of war which pervades many sections of Russian society. They still remember the terrible conflicts in Afghanistan and Chechnya and the sacrifices made in these wars," Smirnova said. The public must not take the view that the effort in Syria will become another Afghanistan, she added.

The campaign appears to be working, as experts said it has changed the popular perception of the Syrian conflict.

According to the Moscow-based Levada opinion poll center, the percentage of people favoring military support to be provided for the Syrian government has risen from 14 percent to 47 percent.

"No one took seriously the deadly threat posed by ISIS terrorists. Some poll respondents even named the group as a probable ally in geopolitical games," said Levada expert Stepan Goncharov in an article on Russia Direct published on Oct. 23.

"This situation persisted until the end of this summer, when information about the transfer of troops to the Russian base in Syria was leaked in the media," Goncharov said.

Speaking in London on October 26, Keir Giles, specialist on Russian security, explained that the Russian government is rapidly modifying and refining its information strategy.

The Russian government is waging a well-equipped and well-financed media campaign, Giles continued. "The Russian media is harping on the consequences of the 'irresponsible interventions' Western powers waged in Iraq and Libya. Pointing to the chaos that ensued in these countries, the campaign shows how the Russian concerns have been vindicated and warns that Russia will not allow the repeat of such mistakes in Syria."

Putin's objective is to restore Russia as a world power, noted Cyril Bret, a professor at the Center for Political Studies, Paris. Writing in Atlantico on Oct. 25, he pointed out that Putin is using mass communication to reinforce this idea among the Russian people, as well as to influence policy on the international scale.

"Putin is good communicator on the domestic front as a person who seems to master the psyche of the Russian people," Bret said.

According to Justas Sireika, a researcher at Lithuanian Center for Information Security and Analysis, some of the Russian government's media tactics come straight from the Soviet era's "We-against-them" propaganda.

"The campaign tries to show that Russians, along with Slavs and Orthodox Christians, are the upholders of true values whereas the nations of Western Europe only contribute to the death of such values. All this is done to create in the mind of the masses an image of who is on the side of good and who is on the side of the evil," Sireika wrote on the Lithuanian Tribune's website Delfi.lt on Oct 29.

"For this purpose, successful use is made of a combination of symbols, myths, facts and lies which help to shape established public opinion with make-believe constructions. Repeated diffusion of these constructions gives them authenticity," Sireika said.

According to Giles, the Russians also make use of some updated "agitprop" techniques of the Soviet era -- "agitprop" is a political strategy in which the techniques of agitation and propaganda are combined to mobilize public opinion.

"For example," Smirnova said, "All Russian news channels now show how efficiently Russian aircraft fly from the small airbase in Latakia and hit their targets precisely. The Russian Defense Ministry, which previously took several days even to issue a 'no comment' statement to the press, has suddenly become ever-present on Russian TV screens. Everyday fresh videos of new airstrikes are released and Defense Ministry spokesmen brief the media, updating them on the progress made in Syria."

The underlying message, Smirnova said, is that the Russian armed forces are waging a campaign that Russian citizens should be proud of.

This constant beating of war drums certainly works for President Putin. He has maintained a 90 percent approval rating, an all-time high, in the polls ever since the media campaign started, according to surveys by the VTSIOM all-Russian public opinion research center.
Last Update: Nov 02, 2015 5:59 pm
RELATED TOPICS