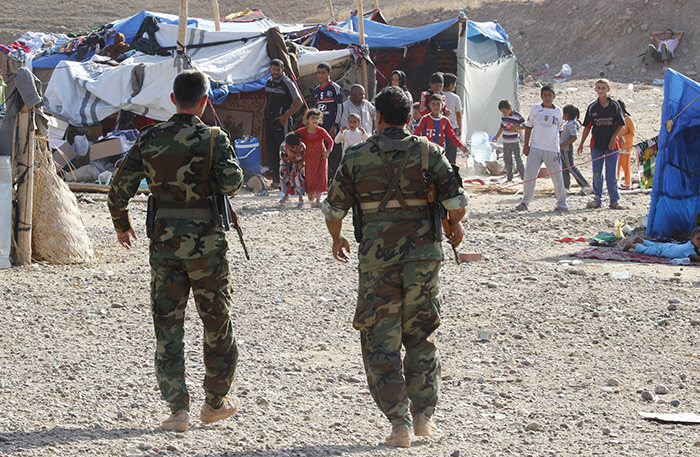 Kurdish Peshmerga forces walk near a displaced family, who fled from ISIS violence in Hawijah, at the hills southwest of Kirkuk (Reuters Photo)
by French Press Agency - AFP
Nov 04, 2015 12:00 am
ISIS terrorist group militants killed four people and wounded 15 on Tuesday in a suicide bombing attack near the entrance to a police building in the town of Dibis in Kirkuk province.

ISIS terrorists detonated bombs, while other militants entered the police building and the local government headquarters, and a total of three more militants were killed.

Another suicide bomber detonated an explosives-rigged vehicle at a checkpoint at the entrance to the Dibis area, wounding an unknown number of members of the security forces.

Dibis is located near the Bai Hassan oilfield northwest of the Kirkuk provincial capital, far from the areas of the province held by ISIS which overran large parts of Iraq last year.

Iraq's autonomous Kurdish region, which wants to incorporate Kirkuk, solidified its control over parts of the province after federal forces fled a sweeping ISIS offensive in June 2014, but the group holds areas in southwest Kirkuk.

Attacks in Kurdish-held areas of Kirkuk province that are behind the front lines have decreased compared with before the offensive, and are now relatively rare.
Last Update: Nov 04, 2015 12:00 pm