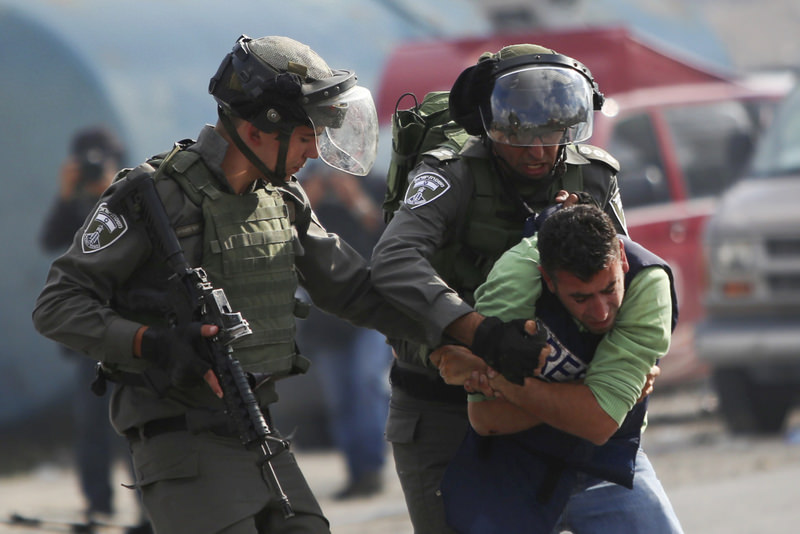 Israeli police wrestle a Palestinian cameraman during clashes outside Ramallah, West Bank.
by Daily Sabah with AP
Nov 05, 2015 12:00 am

Amid recent aggression between Israel and Palestine, amateur videos show Israeli abuse of Palestinians, including the shooting of a wounded Palestinian and the pepper-spraying of Palestinian medics. Israel has decried the criticism and defended its actions

Palestinians and Israeli human rights groups contend the images, many captured by amateur smartphone users, buttress long-standing allegations of excessive force particularly amid a wave of Palestinian stabbing attacks in which top Israeli politicians and security commanders have encouraged forces to shoot to kill suspected assailants. "There is a very clear message sent by those politicians and military commanders that this is how law enforcement should behave," said Sarit Michaeli of the Israeli group B'Tselem, which documents rights abuses.

Israel's army and police defended the actions shown in the videos, with the exception of an officer who was suspended over the tear gas threat. Israel itself has released several videos showing its forces shooting stabbers.

In 2007, B'Tselem began distributing video cameras to Palestinians in West Bank hot spots, such as the Israeli-controlled center of Hebron, carved out for 850 Jewish settlers. One of the first videos, showing a settler woman harassing a female Palestinian neighbor, went viral, Michaeli said. About 200 Palestinians have B'Tselem-issued cameras today. With the rise in smartphone use 10-fold over five years the impact of such amateur images has only grown.

Take several controversial videos that have emerged in recent days. One shows the aftermath of what Israeli police say was a stabbing attack of an Israeli soldier by 23-year-old Mahdi Mohtasseb last Thursday. The video begins with Mohtasseb lying face-down in a Hebron street already wounded by Israeli fire, according to local activists. A member of the Israeli security forces approaches and as Mohtasseb slowly tries to lift himself shoots him from about 15 feet (five meters). Mohtasseb is then shown lifeless and bloodied as Israel's paramilitary border police inspect the body. Israeli police spokeswoman Luba Samri said Mohtasseb still posed a danger because he might have a gun or explosives and ignored calls not to move.

Shukri Mohtasseb, a cousin, said Mahdi Mohtasseb was planning on getting engaged and had no reason to carry out an attack. He maintained his cousin was unarmed. "The soldiers ... could have arrested him because he was injured, but they killed him in cold blood," he said.

Israeli regulations permit security forces to use lethal force when they believe their lives are in danger a subjective gauge, especially when Israelis are feeling so jittery.

Since mid-September, 11 Israelis and 69 Palestinians have been killed in the recent aggression. Rights groups say Israeli troops are often too quick on the draw and are rarely held accountable.

Earlier this week, an Israeli military investigation cleared troops who killed 18-year-old Hadeel Hashlamoun at a Hebron checkpoint on Sept. 22 a shooting London-based Amnesty International said was an apparent "extra-judicial execution." The teen was behind a metal barrier, several yards (meters) from the soldiers, when she was shot dead, Amnesty said, citing a witness. It later turned out she held a knife under her robe, but never pulled it out, the group said. Photos show Hashlamoun facing a soldier with his assault rifle aimed at her. Video of the aftermath shows her body lying next to a metal turnstile, behind the metal barrier that separated her from the soldiers.

The Israeli watchdog group Yesh Din said soldiers face little risk of criminal charges over alleged abuses. Between 2010 and 2013, only 1.4 percent of Palestinian complaints led to indictments against soldiers, the group said.

In one recent case, Israeli authorities said an officer was suspended after amateur video showed him patrolling the Aida refugee camp in a jeep, warning residents over a loudspeaker that if they kept throwing stones, "we will keep attacking you with tear gas. ... Everyone, until you die." Camp resident Yazan Ikhlayel said he filmed the jeep on his smartphone after heavy clashes Thursday between stone-throwers and Israeli forces who he said fired dozens of tear gas canisters. Ikhlayel said he was pleased with the suspension. "Now they know that any wrongdoing will be caught by smartphones and will be seen worldwide," he said.

The filmed confrontation begins with a firebomb hitting an Israeli jeep and bursting into flames on the hood and windshield. Moments later another jeep chases a group of Palestinians, slamming into one. Medics try to approach the injured youth but are pushed back by Israeli forces. "This is pepper spray, go back," an officer shouts in Arabic, then begins spraying. Two medics fall to the ground, one groaning, and are carried away by colleagues. Emirati television journalists Diya Hoshiya and Munther Khateeb said they were also hit with pepper spray. Video shows Hoshiya on the ground as a medic wipes his eyes. In another clip, Khateeb is seen being held in a chokehold by an officer, who Khateeb said pulled off his gas mask to spray his face.

Michaeli, of B'Tselem, said the impact of amateur video should not be overestimated. "If we have learned from past experiences, these soldiers are not facing any penalties," she said. "There is not going to be any real accountability."

In a bid to ease the tension, Israel introduced a number of restrictive security measures last month, including 24-hour surveillance cameras, stepped-up police searches, checkpoints and roadblocks throughout East Jerusalem. Human Rights Watch especially criticized the surveillance cameras for being "a recipe for harassment and abuse."