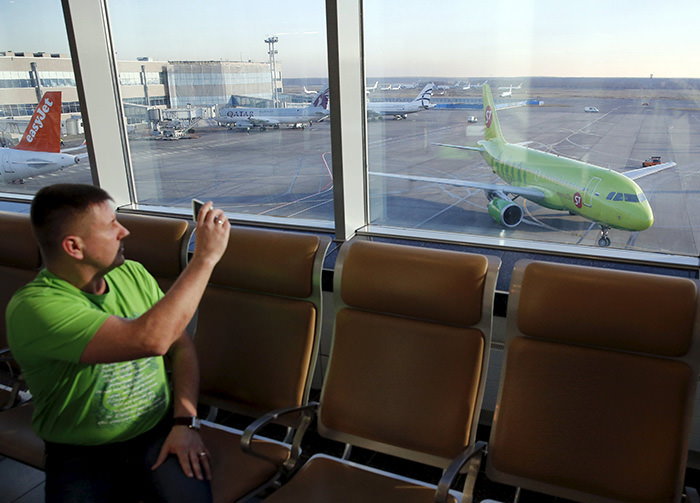 A man takes pictures, with a plane (R) of S7 airlines seen in the background, at Domodedovo airport outside Moscow, Russia, November 6, 2015 (Reuters Photo)
by French Press Agency - AFP
Nov 06, 2015 12:00 am
Russia ordered a halt Friday to flights to Egypt as concerns grew that a bomb downed a Russian plane after takeoff from its Sharm el-Sheikh resort, while British carriers started to evacuate holidaymakers.

President Vladimir Putin called the halt to Russian flights, the Kremlin said, in line with a recommendation from his security chief, although Moscow had downplayed reports that a bomb caused the crash last Saturday.

A first flight finally took off for London's Gatwick airport after a long delay, followed shortly by another plane headed for Britain.

But there were angry scenes at the airport as thousands of anxious Britons who had also hoped to fly home were sent back to their hotels after Egypt blocked several other repatriation flights.

Britain's ambassador, John Casson, was heckled as he announced the news.

"When are we going home?" shouted one Briton forced to spend another night in a Sharm hotel. "We don't know what's happening."

Egypt's aviation minister, Hossam Kamal, said only eight out of 29 flights would take off because the airport could not cope with all the luggage left behind.

In a sign of mounting fears about the security of baggage handling in Egypt, Dutch carrier KLM announced that it had banned check-in luggage on an early flight from Cairo, mirroring moves taken by several European airlines on Sharm flights.
Last Update: Nov 06, 2015 8:04 pm