13 civilians killed in air raids carried out by Assad regime 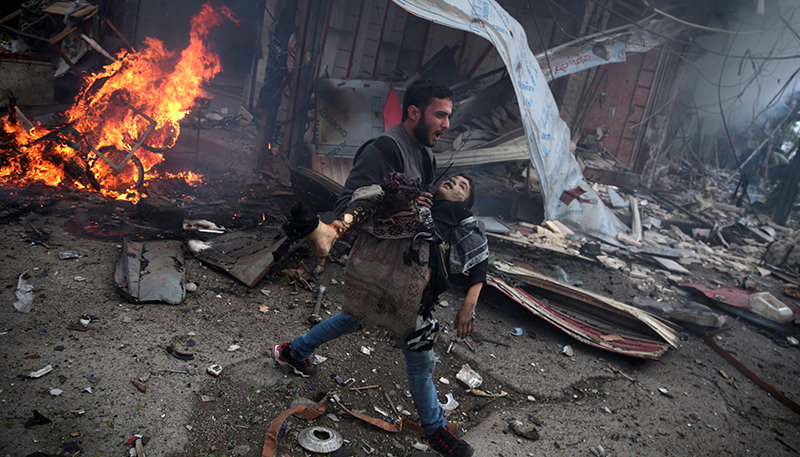 A Syrian man carries the body of a child killed in a reported air strike by government forces in the rebel-held area of Douma, east of the capital Damascus, on November 7 (AFP Photo)
by Compiled from Wire Services Nov 07, 2015 12:00 am
At least 23 people, 13 of whom were civilians, were killed and many were critically wounded when Syrian regime warplanes targeted residential areas in Douma on the outskirts of Damascus, a monitoring group said Saturday.

"Among the killed were six children and seven women," the Britain-based Syrian Observatory for Human Rights reported.

Activists in the area claim the planes were Russian, but dpa could not verify independently their reports.

They added that the planes targeted the Kouatly market in Douma, just outside the capital. civilians lost their lives Saturday when Syrian regime warplanes targeted residential areas in Douma, northeast of Damascus, a Syrian Civil Defense source told Anadolu Agency.

Civil Defense teams rushed to the scene to extinguish the blaze and started searching for victims stuck under the rubble.


The Syrian regime has been besieging opposition-controlled Douma, preventing main supplies from reaching the city that has recently suffered an electric shortage because of the constant airstrikes.

Last week a similar strike on Douma, which lies east of Damascus in the Ghotta region, killed more than 57 people and left over 100 others injured. Eastern Ghouta has frequently been targeted in deadly airstrikes by al-Assad's forces.

The Observatory also said the death toll from an air raid Friday night on the Bou Kamal city killed 71 people, among them six children.

"There are still many missing under the rubble and most of the injured are in serious condition. Mainly they are civilians," Rami Abdel Rahman, head of the Observatory told dpa.

Abdel Rahman did not say if the raids, which took place in eastern Syria near the border with Iraq, were regime, Russian or US-led counter-terror coalition strikes.

The strikes targeted an area that is mainly controlled by ISIS.