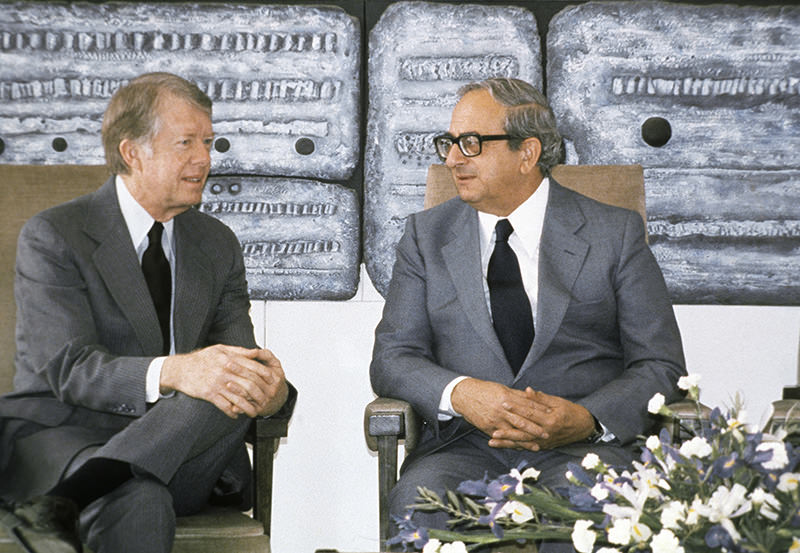 This March 11, 1979 file photo shows the then Presidents of the United State Jimmy Carter, left, and of Israel Yitzhak Navon during a meeting in Jerusalem. (AP Photo)
by German Press Agency - DPA
Nov 07, 2015 12:00 am
Yitzhak Navon, who served as the fifth president of Israel, died Saturday at 94, his family said.

As he entered office, the 1979 Israel-Egypt peace agreement was being negotiated. Navon played an active part in the deal alongside then-prime minister Menachem Begin and calmed tensions surrounding the treaty.

He was also known for demanding a national inquiry into the 1982 Sabra and Shatila massacre, in which a Lebanese Christian militia allied with Israel slayed hundreds of Palestinians in two Beirut refugee camps.

Navon was a scholar of Hebrew literature, Islam and the Arab language, and his fluency in Arabic served him well when then-Egyptian president Anwar Sadat invited him in 1980 to become the first Israeli president to visit Egypt, months after the peace treaty was signed.

"I remember that even Sadat, after his [Navon's] visit to Egypt, said, 'You succeeded in winning over the hearts of the Arab nation,'" Navon's son, Erez Navon, told the ynet news site.

Navon started his career as the political secretary of Israel's first prime minister, David Ben-Gurion. He was member of the precursor of Israel's current Labour Party. He also was a playwrite.

His wife, Ofira, with whom he had two children, died of cancer 22 years ago.