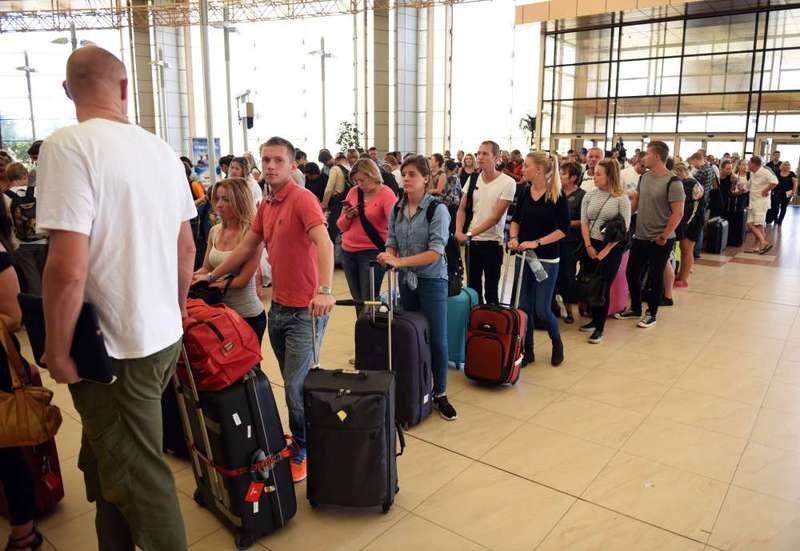 Tourists queue up at check-in counters at the airport of Egypt's Red Sea resort of Sharm El-Sheikh
by Associated Press Nov 07, 2015 12:00 am

As world leaders remain divided over the cause of the Russian jetliner crash, British tourists have been left stranded in Sharm el-Sheikh, waiting for flights home. Budget carrier easyJet accused Egypt of suspending its flights while Egypt denied the accusation

Hundreds of British tourists stranded in the Egyptian resort of Sharm el-Sheikh waited anxiously yesterday for flights home as budget carrier easyJet said the Egyptian government had disrupted some of its flights out of Sinai, the site of a Russian jetliner crash.

Tensions were high and an irate British tourist, who had waited at the airport since early morning hours, harangued U.K. Ambassador John Casson with angry shouts of: "When are we going home?" Britain had grounded all flights to and from Egypt's Sinai Peninsula on Wednesday, saying there was a "significant possibility" the Russian airliner that crashed last Saturday, killing 224 people, was downed by a bomb. The Metrojet's Airbus A321-200 crashed 23 minutes after takeoff from Sharm el-Sheikh en route to St. Petersburg, with mostly Russian tourists aboard.

U.K. authorities had approved the flights back, starting yesterday, though passengers were only allowed to take carry-on bags with them. EasyJet had been due to operate 10 flights from the Red Sea resort but said eight would not be able to fly because Egypt had suspended them. "We are working with the U.K. government at the highest level on a solution," easyJet said in a statement. Two other carriers, Monarch and British Airways, said they still planned to operate flights back from Sinai yesterday. Egypt's civil aviation minister, Hossam Kamal, said there would be eight flights in all to the U.K. on Friday, instead of the 29 planned earlier. He said the British airlines are flying without passengers' luggage, while Sharm el-Sheikh airport's storage can hold no more than 120 tons of luggage left behind. "This big volume will affect the smooth operation of the rest of the domestic and international flights," said Kamal, adding that a cargo plane would carry bags separately for each flight.

The development is likely to hinder Britain's attempts to smoothly bring back the estimated 20,000 U.K. nationals in Sharm el-Sheikh. Transport Secretary Patrick McLoughlin said yesterday that "most of the people who were expecting to be home by tonight will be home by tonight." On the ground in Sharm el-Sheikh, employee Mohammed Abdel Fattah who works as a handling agent for easyJet, said two of the budget airline's flights to the U.K. have been checked in. He told the rest of EasyJet passengers to return to their hotels, "until there are new updates."

Early in the morning, the Egyptians carried out expanded security checks as dozens of busses, ferrying British and Russian tourists, waited outside the airport, the line stretching up to a kilometer as police inspected each vehicle. Russia and Egypt have dismissed Western suggestions that a bomb may have caused the crash last Saturday, saying the speculation was a rush to judgment and insisting the investigation must run its course. The United States and British leaders have stopped short of a categorical assignment of blame in the crash, but Prime Minister David Cameron said Thursday it was "more likely than not" that the cause was a bomb.

The crash prompted companies to ground flights from and to the Red Sea resort, stranding thousands of tourists this week. Britain later said additional security measures would be in place, including only allowing passengers to carry hand baggage, while checked luggage will be transported separately. The carry-on measure applies only to those departing from Sharm el-Sheikh, British officials said.

Meanwhile, Dutch carrier KLM announced it instructed its passengers leaving from the Egyptian capital of Cairo that they can only take hand luggage on the plane departing yesterday. A statement on KLM's website says the measure is "based on national and international information and out of precaution." KLM, which has no direct flights to Sharm el-Sheikh, did not elaborate on the unusual measure. Nothing has been revealed so far from the ongoing investigation into the plane crash.

Security officials at the Cairo airport told The Associated Press that flight KL554 left for Amsterdam on Friday morning with only 115 passengers out of the 247 who were booked on the flight. The rest refused to leave without taking their check-in bags, said the officials, who spoke on condition of anonymity in line with regulations. Dutch Foreign Minister Bert Koenders said his government's decision was linked to lax security. "We have the impression that there are insufficient security measures there," he told reporters in The Hague and added that the advisory did not cover the whole of Egypt.

Air France said in a statement to the AP on Friday that it is reinforcing screening in Cairo and monitoring the situation with Egyptian authorities. France's Foreign Ministry on Friday urged its citizens to avoid Sharm el-Sheikh and also the Sinai resort of Taba as well as surrounding areas, unless they have an "imperative reason" to go.

ISIS, which has not generally pursued "spectacular" attacks outside its base in Syria, has claimed responsibility for bringing down the plane, but Russian and Egyptian officials say the claim was not credible. Russia is conducting an air war in Syria against ISIS militants who have promised retaliation.

Earlier this week, two U.S. officials told the AP that images from U.S. satellites detected heat around the jet just before it went down. The infrared activity could mean several things, including a bomb blast or an engine exploding because of a mechanical breakdown.

Egypt which stands to lose millions of dollars from its vital tourism industry maintains there is nothing wrong with the Sharm el-Sheikh airport, which each year welcomes thousands of vacationers to the resort beside the crystal-clear Red Sea.
Last Update: Nov 07, 2015 1:12 am
RELATED TOPICS