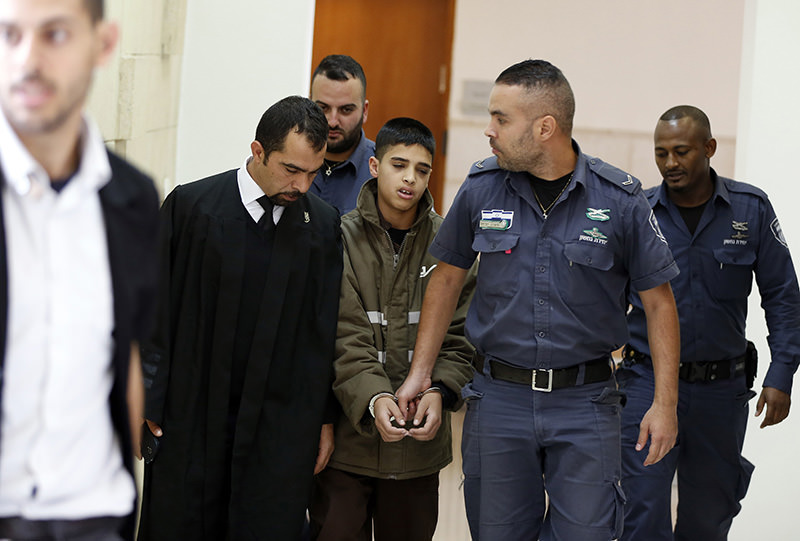 by Compiled from Wire Services Nov 10, 2015 12:00 am
Palestinian teen Ahmed Manasra went on trial before a Jerusalem court on Tuesday over an alleged stabbing attack last month that fueled a media war amid the ongoing deadly surge in Israeli-Palestinian violence. Manasra earlier came into prominence with the footage that show him lying on the floor his head bloodied as bystanders curse him and shout "Die!" in Hebrew.

In the video released by Palestine's Maan News Agency and which is likely to raise further controversy, police officers show Ahmed footage of him and his cousin wielding knives and chasing a man through the streets of the Pisgat Zeev settlement. One of the officers shouts at Ahmed, "Is this you, this person?" as the teen cries and says he doesn't remember.

It was unclear how Palestinian media obtained the video or who filmed the Israeli investigation.

According to the indictment, 13-year-old Ahmed and his cousin Hassan, 15, stabbed two Jewish settlers in an east Jerusalem neighborhood in mid-October. Police fatally shot Hassan and a passing car ran over Ahmed. The Israeli victims, aged 20 and 13, survived their wounds.

The case became a lightning rod for both sides in the Israeli-Palestinian divide after Palestinian President Mahmoud Abbas erroneously claimed in a televised speech that Israelis had "summarily executed" Ahmed. The 13-year-old at the time was recovering at an Israeli hospital.

Israel promptly accused Abbas as it has done repeatedly in the past months of fomenting violence with what it says are incendiary comments.

For their part, Palestinians were enraged by video that surfaced on social media showing Ahmed lying in the street.

Warning: Graphic content, following images may be disturbing to some viewers. Viewer discretion is advised

The latest bloodshed was triggered by unrest at a major Jerusalem shrine revered by both Muslims and Jews, and quickly spread to Israel, the West Bank and the Gaza border.
Last Update: Nov 10, 2015 4:18 pm
RELATED TOPICS