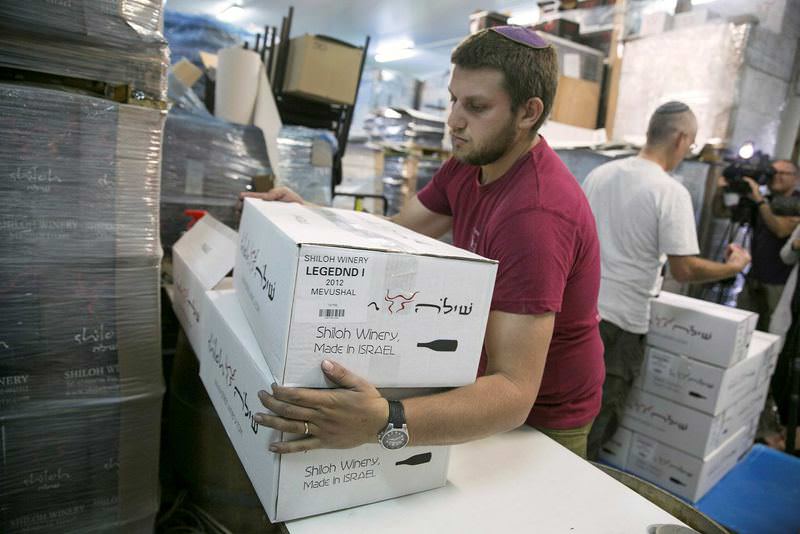 A worker carries boxes containing wine bottles and will have to label them as produced in occupied territories to export the EU countries.
by Daily Sabah with Wires
Nov 12, 2015 12:00 am

After Israeli PM Netanyahu reportedly asked U.S. President Obama to recognize Israeli's presence in the Golan Heights, which is the center of Israeli agricultural production, the EU approved a bill to label the products as made in occupied territories

Relations between the European Union and Israel took a dive on Wednesday after Israel derided a decision by the 28-nation bloc to specially label products made in West Bank settlements. The Israeli Foreign Ministry said the EU has taken an "exceptional and discriminatory step" for "political reasons," while Defense Minister Moshe Yaalon added to the condemnation by calling the move a "shameful step that grants terror a prize." The EU move, which came after months of procrastinating, underscores the bloc's unhappiness over Israel's continued expansion of settlements on territory that Palestinians seek for their future state. The 28-member union is now seeking to differentiate between its relations with Israel and with the settlements, fearing that a continued status quo would never push the Israeli government into changing its settlement policies.

The approval came two days after Israeli Prime Minister Benjamin Netanyahu urged the U.S. President Barack Obama to recognize the occupied Golan Heights. Israeli newspaper Haaretz claimed that Netanyahu asked Obama to renew the U.S.'s position on the Golan Heights amid the Syrian war. "Netanyahu hinted during his meeting with U.S. President Barack Obama on Monday that Israel would be interested in discussing the U.S.'s position on Israel's annexation of the Golan Heights, in light of the Syrian civil war," the report said. "According to the sources, who wished to remain anonymous due to the sensitivity of the issue, Netanyahu said he is doubtful Syria could be reunited into one, functioning state. He added that one of the consequences of the current situation is that it 'allows for different thinking' about the future status of the Golan Heights," the report read. The newspaper claimed that Obama did not respond to Netanyahu's comments on the matter. The Golan Heights is one of Israel's centers of agricultural production.

Once the labelling is implemented, European consumers will be able to read on the label of most products if a piece of merchandize or goods mostly fruit and vegetables, was produced on Israeli settlements. Israel fears the labels will be a political stigma. The EU does not recognize Israel's occupation of the West Bank, Gaza, East Jerusalem and the Golan Heights, lands it captured in the 1967 Middle East war. It says the labelling policy aims to distinguish between goods made inside the internationally accepted borders of Israel and those outside. Britain, Belgium and Denmark already affix labels to Israeli goods, differentiating between those from Israel and those, particularly fruits and vegetables that come from the Jordan Valley in the occupied West Bank. Now all 28 EU member states would have to apply labels. While there is no EU official wording, goods must carry the word "settlement" on the label when sold in European shops. If an Israeli farmer refuses, a retail outlet can do so, as the European Commission has sufficient information about where goods come from.

EU Vice-President Valdis Dombrovskis insisted the measure was "a technical issue, not a political stance." He said the guidelines had to be taken after three member states Britain, Belgium and Denmark already had imposed special labeling on their own, forcing the EU to streamline measures throughout the 28 nations. "The EU does not support in any form a boycott or sanctions against Israel," he said, insisting that Israeli products from within the internationally recognized borders still benefit from EU preferential tariff treatment.

However, Israel insists the step was inspired by an international boycott movement against Israel and noted that it comes at a time when the country is confronting a "wave of terrorism" amid stepped-up Palestinian attacks. The Israeli foreign ministry said that "it is puzzling and even irritating that the EU chooses to apply a double standard concerning Israel" while other territorial disputes are treated differently.

The ministry also said the step "raises questions" about EU's role in the region and could have implications on Israel's relations with Europe. It added that the measure also will harden Palestinian positions and make it more difficult to resume peace talks. After the decision was announced, the Israeli Foreign Ministry summoned the EU ambassador. Earlier this week in anticipation of the move, Israeli Cabinet minister Yuval Steinitz said "we cannot conceive it but as some disguised anti-Semitism."

The measure will primarily cover fruit and vegetables from the area. The labeling should affect less than 1 percent of all trade between the EU and Israel, which stands at some 30 billion euro ($32 billion), including 13 billion euro ($14 billion) Israeli exports into the bloc.

EU officials have said that in Britain, where the labelling is already in place, it has had no negative economic effect. Also, for over a decade now, the EU has excluded products from settlements from trade preferences. Israel, however, sees it as a political stigma that would push consumers away.