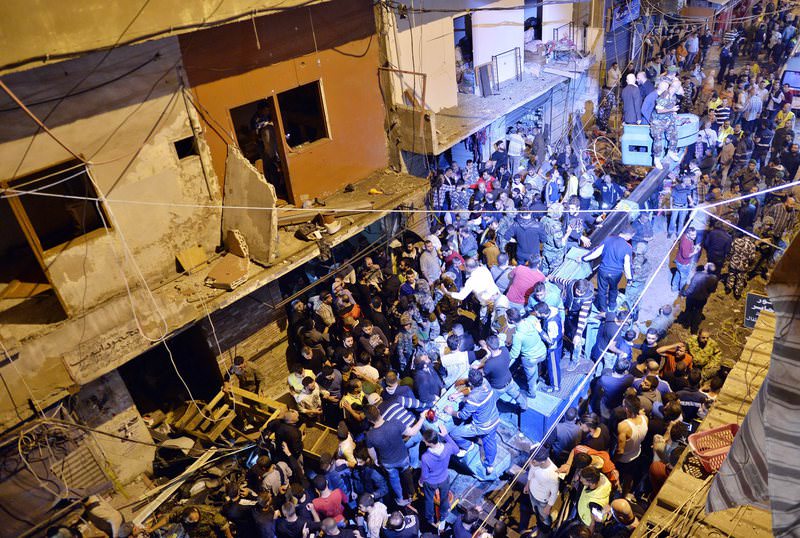 by Daily Sabah with Wires Nov 12, 2015 12:00 am
The Islamic State of Iraq and al-Sham (ISIS) has claimed responsibility for the twin suicide bombings that killed 41 people and wounded more than 200 Thursday in a Beirut stronghold of Lebanon's Shiite movement Hezbollah.

Health Minister Wael Abou Faour, speaking from the scene on a street of shops where vendors also sell from stalls, said many of the injured were in serious condition.

The army said the body of a "third terrorist" was found at the scene of one of the blasts after he apparently failed to blow himself up.

The attacks were the deadliest to hit a Hezbollah stronghold since the group entered the conflict in neighbouring Syria in 2013 in support of President Bashar al-Assad.

A string of them targeted areas where the group is popular throughout 2013 and 2014. In the most recent one in the southern suburbs of Beirut in June of last year, a suicide car bomb killed a security officer.

The neighbourhood is bordered by the Burj al-Barajneh Palestinian refugee camp.

An AFP photographer saw extensive damage to buildings around the site of the blast and bodies inside some of the nearby shops.

There was blood on the streets, and security forces were trying to cordon off the scene and keep people from gathering.

Local television stations showed footage of wounded people being carried away by emergency services and civilians.

"I'd just arrived at the shops when the blast went off. I carried four bodies with my own hands, three women and a man, a friend of mine," a man who gave his name as Zein al-Abideen Khaddam told local television.

Another described the sound of the blasts.

"When the second blast went off, I thought the world had ended," he said.

The wounded were evacuated to several hospitals in the area, including the Bahman hospital in neighbouring Haret Hreik.

"We've received dozens of wounded people and they're continuing to arrive," a doctor there told AFP.

And former premier Saad Hariri, who leads a political bloc opposed to Hezbollah and its allies, condemned the blast as "vile and unjustified".

Between July 2013 and February 2014, there were nine attacks on Hezbollah throughout Lebanon, mostly claimed by Sunni extremist group.

Despite ostensibly targeting Hezbollah, the victims of the attacks have been overwhelmingly civilians.

The deadliest in southern Beirut was in 2013, when 27 people were killed by a car bomb in the Rweiss district.

The attacks were claimed by several different Sunni groups, but all cited Hezbollah's role in the conflict in Syria.

Hezbollah is a staunch ally of Assad's regime and is backed by Iran, another key supporter of the government in Damascus.

In early 2013, it dispatched its fighters to back government forces against a Sunni-dominated uprising that with anti-regime demonstrations in March 2011.

Since then, the group has become deeply involved in the conflict, dispatching fighters throughout the country to bolster Assad's troops on a range of battlefields.

It has devoted particular attention to the Qalamun region along the two countries' border, but its fighters have also reportedly been key in government advances elsewhere including, on Thursday, in the northern Aleppo province.

At least 971 Hezbollah fighters have been killed in Syria, according to the Britain-based Syrian Observatory for Human Rights monitor.