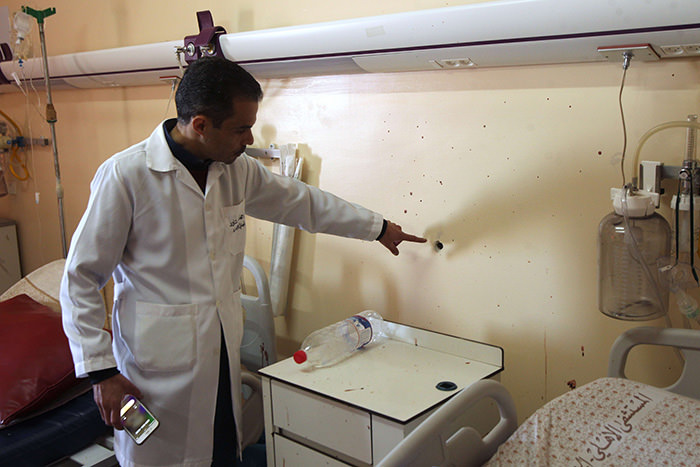 A Palestinian doctor shows a bullet hole at al-Ahli hospital in the West Bank town of Hebron after a man was shot dead during a raid by Israeli forces on November 12, 2015 (AFP Photo)
by Daily Sabah with Agencies Nov 12, 2015 12:00 am
A Palestinian hospital official says a Palestinian man has been killed during an Israeli arrest raid at a West Bank hospital.

The Israeli military says its forces entered the Al-Ahli hospital in the city of Hebron to arrest Azzam Shalaldeh, a Palestinian man who they say stabbed an Israeli last month.

Jihad Shawar, the hospital director, identified the man as Abdallah, Shalaldeh's brother. He said forces shot him as he emerged from a bathroom.

Shalaldeh was in the hospital being treated for gunshot wounds. The military says he was shot during the stabbing attack last month.

Thursday's incident comes amid a wave of Israeli-Palestinian violence that has shown no signs of abating.

One month has passed since the beginning of what some are calling a new Palestinian intifada in the Israeli-occupied West Bank and East Jerusalem, which has left scores of Palestinians dead and hundreds injured. According to the Palestinian Health Ministry, the total number of Palestinians killed by Israeli forces since Oct. 1 now (Nov. 7) stands at 75, including 17 children and two women.

Over the same period at least 2,350 Palestinians have been injured by Israeli gunfire while thousands of others have suffered temporary asphyxia as a result of excessive teargas, the ministry said. Fifty-six Palestinians have been killed in the occupied West Bank and East Jerusalem and 17 in the blockaded Gaza Strip, while an Arab-Israeli was killed in the city of Beersheba in southern Israel. The latest violence comes amid a wave of alleged Palestinian knife attacks that have left 11 Israelis dead and 145 injured, according to Israel's Magen David Adom paramedic service. The mass detention of Palestinians suspected of engaging in resistance activities, meanwhile, has continued unabated.
Last Update: Nov 13, 2015 9:48 pm
RELATED TOPICS