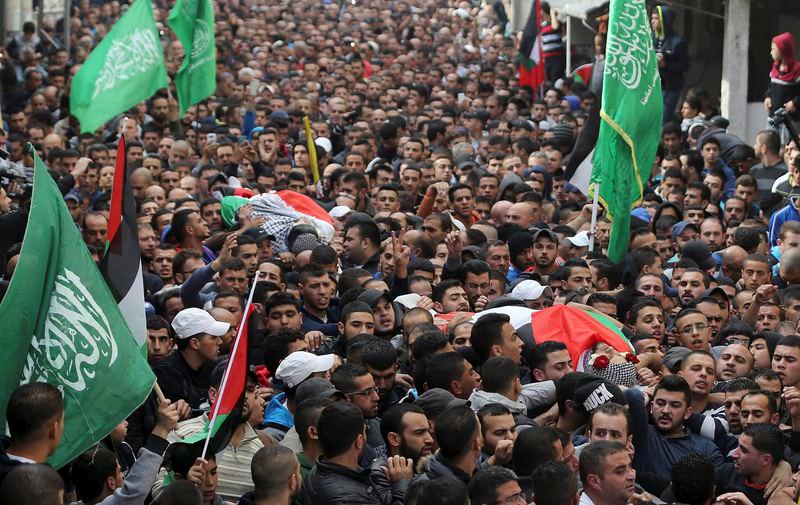 Mourners carry the bodies of Palestinian Ahmed Abu al-Aish and Laith Manasrah, who were killed by Israeli troops on Monday.
by Compiled from Wire Services Nov 17, 2015 12:00 am

In a military raid in the West Bank, Israeli troops razed a jailed Palestinian's home and killed at least two people during clashes. Rights groups criticize Israel for collective punishment against Palestinians

Israeli troops killed two Palestinian gunmen during a clash in the occupied West Bank on Monday that was sparked by an army incursion to demolish a jailed Palestinian's family home, Palestinian medical sources and residents said. At least three other Palestinians in Qalandia refugee camp, near the West Bank city of Ramallah, were wounded in what was the fiercest armed confrontation in a seven-week-old surge of violence. Defense Minister Moshe Yaalon said the incident would not make Israel rethink the demolitions policy, revived with the permission of Israel's Supreme Court but criticized by civil rights groups that deem it collective punishment.

Palestinian Foreign Minister Riyal al-Maliki, speaking on Voice of Palestine radio, described the Qalandia incident as "clear escalation, clear assassination" by Israel. Israel said its troops had come under attack while razing the home of a Palestinian who killed an Israeli hiker in the West Bank in June. "There was, indeed, violent resistance in Qalandia, but the (Israeli military) unit conducted itself in a very professional manner. It also carried out the mission, blowing up the home. It also hit the gunmen -- four of them, according to the unit," Yaalon told Israel Radio. Asked whether the incident might make Israel think twice about such demolitions, Yaalon said: "Under no circumstances ... There is no doubt fear of a home getting destroyed is a measure that offers great deterrence." On Sunday, Israel's Shin Bet security service said it detained a Palestinian for killing two Jewish settlers in the West Bank last week after his relatives, "worried their home might be demolished", turned him in.

The home targeted was that of Mohammed Abu Shahin, accused of shooting dead Danny Gonen, a 25-year-old Israeli hiker, near the Dolev settlement in the West Bank on June 19, in an attack that also wounded another Israeli. The murder, which occurred on the first day of Ramadan, led to outrage among Israelis. The two victims were not settlers but hikers who had come from Lod in central Israel. According to Israeli authorities, the attacker approached their car and asked whether there was water in a nearby spring before pulling out a gun and shooting them. Shahin's arrest was announced in July, with Israel alleging he belonged to an armed group linked to Fatah, the party of Palestinian president Mahmud Abbas. The shooting occurred before the current wave of violence that began in October, but Israel has sought to expedite demolitions for a range of Palestinians accused of attacking Israelis as a deterrent measure.

It was unclear if a third Palestinian was killed. Palestinian officials said one Palestinian was taken into Israeli custody. Military spokeswoman Libby Weiss said troops had made no arrests at the scene. Hundreds of Palestinians threw firebombs and rocks at Israeli forces while they were demolishing the home, and troops fired rubber bullets, tear gas and stun grenades to disperse the protesters, the military said. The latest killings come amid a wave of Israeli-Palestinian violence in the last two months. Palestinian attacks, mainly stabbings, have killed 14 Israelis, and at least 83 Palestinians have been killed by Israeli fire, including 53 Israel says were involved in assaults. The rest were killed in clashes with security forces. In recent days, Israel has renewed a policy of demolishing homes belonging to Palestinians accused of carrying out deadly attacks against Israelis. On Saturday, Israel demolished three homes in the West Bank belonging to attackers who killed an Israeli couple in front of their children in the West Bank on Oct. 1. Also that day, the military demolished a fourth home belonging to a man who killed an Israeli on his way home from a basketball game. Israel says home demolition is a legal and effective tool to deter attacks, but critics say the tactic amounts to collective punishment.
Last Update: Nov 17, 2015 1:59 am
RELATED TOPICS