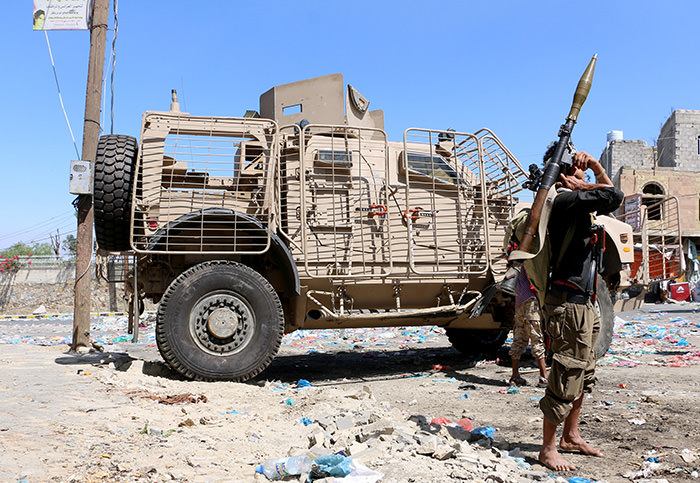 |AA Photo
by Associated Press Nov 20, 2015 12:00 am
Two Daesh-claimed attacks on Friday in Yemen's largest province killed at least 15 people and wounded 30, security officials said, as the latest sign the extremists are taking advantage of the country's civil war to expand their reach.

Meanwhile, a lawyer representing an American held in Yemen since 2010 on suspicion of being linked to al-Qaida militants said his client wasn't among three U.S. citizens recently freed and evacuated from the country.

A car bomb detonated amid the fighting in Shibam, according to a video shot by a local resident which corresponded to other Associated Press reporting about the assault.

The security officials, who spoke on condition of anonymity as they weren't authorized to speak to journalists, provided the casualty figures. A claim for the attack circulated online by Daesh supporters offered a higher death toll of 50 killed. The discrepancy could not be immediately reconciled.

While the AP could not independently verify the Daesh claim, it corresponded to others previously released by the group. Daesh has claimed a series of bombings that killed 152 and wounded 345 people this year in Yemen, according to an AP count.

Earlier in the day, officials blamed al-Qaida in the Arabian Peninsula, Yemen's local branch of the militant group, for the attacks. Al-Qaida fighters have captured much of Hadramawt province and its capital, Mukalla, amid the civil war gripping the country. Washington considers the branch to be the world's most dangerous.

Yemen's civil war pits Shiite rebels known as Houthis and their allies against the internationally backed government forces and a Saudi-led coalition. At least 5,700 people have been killed in the conflict in Yemen since March 26, including 830 women and children, the United Nations said Wednesday. The war has pushed the country to the brink of famine, as the U.N. says over 21 million people 80 percent of the population need humanitarian assistance.

Houthis and others have taken foreigners hostage in the chaos of the war. On Thursday, officials said three Americans held captive by the Houthis in Yemen's capital, Sanaa, had been freed and flown to neighboring Oman after the sultanate negotiated on Washington's behalf.

The U.S. Embassy in Muscat has not identified those freed. However, they did not include Sharif Mobley, a U.S. citizen held in Yemen since 2010 on suspicion of being part of al-Qaida, said Cori Crider, an American lawyer representing him.

Mobley, who grew up in New Jersey, faces a death sentence on charges he killed a hospital guard while trying to escape government custody. He was apparently seized by the Houthis when they took Sanaa in September 2014.

Crider, who works with the United Kingdom-based advocacy group Reprieve, said in a statement that the U.S. State Department has yet to offer any new information to Mobley's family.

"Why is State refusing to help his distressed relatives?" she asked. "As his lawyer, I am dumbfounded at this wall of silence, and can only assume that the U.S. is embarrassed at its own role in his terrible ordeal."
Last Update: Nov 21, 2015 1:26 am
RELATED TOPICS