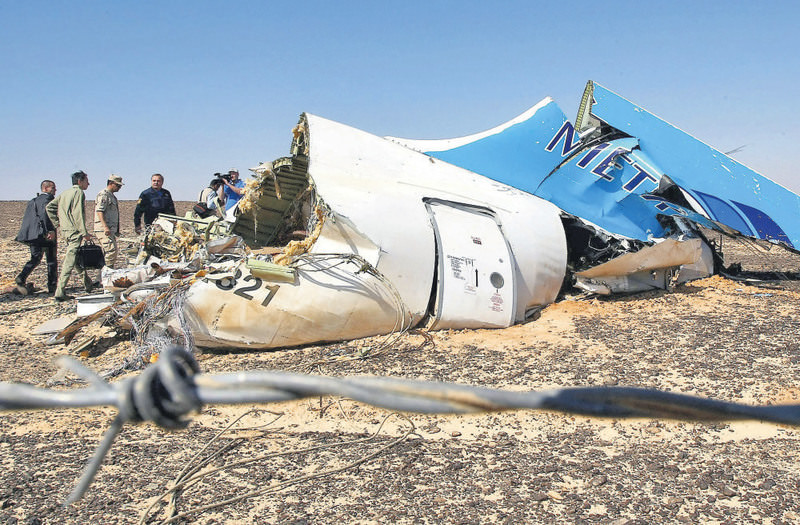 Russian Emergency Minister Vladimir Puchkov (4th L) at the crash site of a A321 Russian Metrojet airliner in Wadi al-Zolomat, a mountainous area of Egypt's Sinai Peninsula.
by Daily Sabah with Wires Nov 20, 2015 12:00 am

A month after a Russian passenger plane was brought down, killing all 224 people, DAESH released a photo of a bomb that it claimed downed the jet over Egypt. It also announced it executed two hostages from Norway and China

DAESH has released a photo of a bomb hidden in a soft drink can that it said had brought down a Russian passenger jet over Egypt last month, and it also announced it had killed hostages from Norway and China.

Wednesday's disclosure of the new violence by the militants came as Russian and French warplanes continued their stepped-up airstrikes against DAESH targets in Syria. The extremists' English-language Dabiq magazine featured graphic photos of two bodies that appeared to be Chinese hostage Fan Jinghui and Norwegian Ole-Johan Grimsgaard-Ofstad. A stamp-like caption overlaid on the full-page photo read: "Executed after being abandoned by the kafir [disbeliever] nations and organizations."

It was unclear when, where, or how they were killed, but their heads were bloodied by apparent gunshot wounds. Their deaths come days after 129 people were killed in Paris in the worst ever militant attacks on French soil, and as Moscow launched fresh air raids against DAESH in Syria after confirming a "terrorist attack" brought down a Russian passenger jet in Egypt last month. The Norwegian prime minister's office said the photos "seem to show that the hostage Ole-Johan Grimsgaard-Ofstad was executed. We are still verifying it."

China confirmed Fan's "inhuman" death in a statement posted on the foreign ministry website yesterday, vowing to bring his killers to justice. "The terrorist organization has no regard for human decency and the bottom line of morality," ministry spokesman Hong Lei said. "The Chinese government strongly condemns this inhuman atrocity; we must bring these criminals to justice." President Xi Jinping was quoted by state media as saying: "Terrorism is the public enemy of human beings." The two men were last featured in Dabiq's September edition, in which DAESH published an "advertisement" that they were "for sale."

Since Sunday, Russian and French raids have struck arms depots, barracks and other areas in Raqqa, the extremists' stronghold in northern Syria. "This is where we must hit DAESH, in its lifeblood," said French Defense Minister Jean-Yves Le Drian. A preliminary death toll from the Syrian Observatory for Human Rights monitor said 72 hours of strikes "left 33 dead and dozens wounded in DAESH ranks." However, the activists on social media claimed that the airstrikes were targeting civilians as well since DAESH was using the civilian areas to hide. Aktham Alwany, a journalist and activist from Raqqa, said civilians in the city were "only moving around when necessary" out of fear of strikes by "whichever nationality - Russian, regime, coalition." "Unfortunately, it's no secret that DAESH's bases are inside civilian homes. There are some bases that look like they're for DAESH, but in reality they're empty fakes, while civilian homes are teeming with them," Alwany told AFP.

It was also reported that Russia bombed Idlip and Aleppo, as well where dozens of civilians died in the last few days. The activists warned that a new refugee flow may occur unless the attacks distinguish militants from civilians.

Russia said its air force had destroyed some 500 fuel trucks in the past few days as they transported oil from Syria to refineries in Iraq, a key part of DAESH financing. Russia on Wednesday also submitted a revised draft U.N. resolution calling for closer international cooperation against DAESH in Syria, parts of which the group rules under its self-proclaimed "caliphate" that also straddles Iraq.

Meanwhile, U.S.-led airstrikes have also hit at least 177 targets in the extremist group's main oil-producing region over the past month. Those strikes include 116 oil tanker trucks hit by coalition forces earlier this week as the United States targeted the vehicles for the first time in the wake of last Friday's suicide and shooting attacks in Paris claimed by DAESH.

France also began airstrikes targeting DAESH in Syria in September as part of a U.S.-led coalition, while Moscow launched its own air war in Syria, in coordination with Syria's Bashar aAssad, on Sept. 30. Despite their diametrically opposed stances on Assad, France and Russia agreed to coordinate their military and security services to fight DAESH after the attacks in Paris and the downing of the Russian airliner. French Foreign Minister Laurent Fabius said Wednesday the aircraft carrier Charles de Gaulle would be operational in the eastern Mediterranean "by the end of the week."

U.S. President Barack Obama praised Russia as a "constructive partner" in international talks in Vienna aimed at reaching a solution to Syria's bloody conflict, which has cost 250,000 lives over more than four years.
RELATED TOPICS