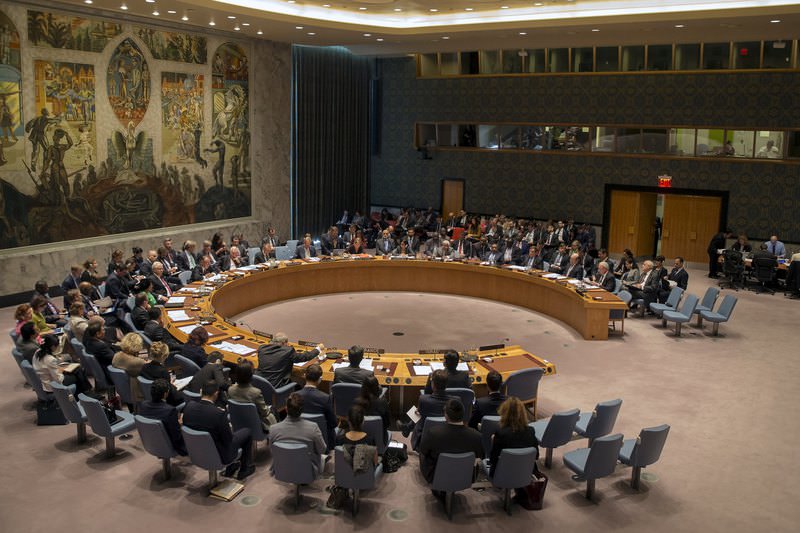 by Daily Sabah with AP Nov 21, 2015 12:00 am
The U.N. Security Council unanimously approved a French-sponsored resolution Friday calling on all nations to redouble and coordinate action to prevent further attacks by DAESH terrorists and other militant groups.

The measure is the 14th terrorism-related resolution adopted by the U.N.'s most powerful body since 1999.

It was adopted a week after DAESH terrorists launched a coordinated gun and bomb assault that killed 130 people in Paris which DAESH later claimed it carried out. It also comes eight days after twin suicide bombings in Beirut killed 43 people, and three weeks after a Russian airliner crashed over Egypt's Sinai peninsula killing all 224 people on board both attacks also claimed by DAESH.

The resolution "unequivocally condemns in the strongest terms" these and earlier "horrifying terrorist attacks" carried out by the DAESH this year in Sousse, Tunisia and Ankara, Turkey.

The resolution calls on U.N. member states "that have the capacity to do so to take all necessary measures" against the DAESH group and all other violent extremist groups "to eradicate the safe haven they have established over significant parts of Iraq and Syria."

This does not constitute an authorization for military action, however, because the resolution is not drafted under Chapter 7 of the U.N. Charter which is the only way the United Nations can give a green light to the use of force.

The resolution urges U.N. member states "to intensify their efforts to stem the flow of foreign terrorist fighters in Iraq and Syria and to prevent and suppress the financing on terrorism."

In September 2014, U.S. President Barack Obama chaired a Security Council meeting where members unanimously adopted a resolution requiring all countries to prevent the recruitment and transport of would-be foreign fighters preparing to join terrorist organizations such as DAESH. In February, the council adopted a resolution aimed at tightening its crackdown on financing terrorist groups through illicit oil sales, trading in antiquities and paying ransom for hostages.

The new resolution draws on language in the resolution the council adopted a day after the deadliest terrorist attacks ever on American soil on Sept. 11, 2001 which also called on all countries "to redouble their efforts to prevent and suppress terrorist acts including by increased cooperation."

It reaffirms that those involved in terrorist acts must be held accountable and expresses the council's determination to swiftly update the list of people and organizations subject to U.N. sanctions "to better reflect the threat" posed by DAESH.

The Security Council currently has on the table two other terrorism-related resolutions, one by Russia circulated Wednesday evening and another on Boko Haram sponsored by the council's three African members, Chad, Nigeria and Angola.

The Russian draft is a revised version of a text rejected weeks ago by the United States and others because it calls for countries to cooperate with nations in which counterterrorism operations are carried out a clear reference to Syria, Moscow's ally, and President Bashar Assad. The new text contains similar language, and Western diplomats said this remains a problem.