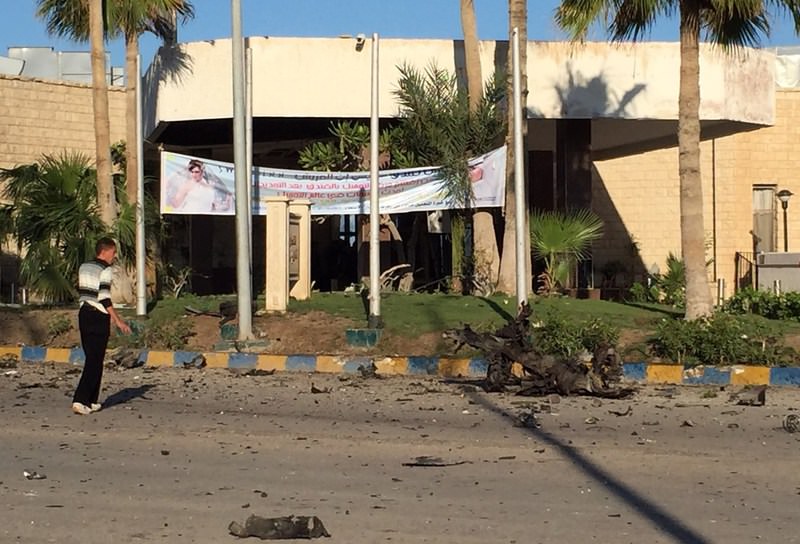 by Daily Sabah with DPA Nov 25, 2015 12:00 am
Seven people including two judges monitoring parliamentary polls were killed Tuesday when militants in Egypt's troubled North Sinai province attacked a hotel where the judges were staying.

A statement from militants affiliated with the Daesh terrorist organization claimed responsibility for the attack, a major breach of tight security measures surrounding the first parliamentary elections to be held under President Abdel-Fattah al-Sissi.

The Egyptian Army said that a suicide attacker driving an explosive-rigged car attempted to approach the Swiss Inn hotel in provincial capital al-Arish, where the judges were staying.

He was "quickly engaged" by army and police guards, causing the vehicle to explode, the army said.

While troops were dealing with the car bomber, two more attackers snuck into the hotel, the army said.

One blew himself up in the hotel kitchen with a suicide vest, while the other opened fire at random in a room inside the hotel, killing one of the judges.

Security forces cordoned off the area, setting up several checkpoints on roads leading to the hotel, while ambulances took the wounded to hospitals in the city.

The army said that all the attackers died at the scene, and operations were under way to track down those involved in planning the attacks.

Hamad was "a model of what we look for in any judge," prominent activist and journalist Hossam Bahgat wrote on Facebook: "purity from personal ambitions, ... courage in confronting the authorities, and a mastery of his work."

The second and final round of Egypt's parliamentary elections were held Sunday and Monday. The judges, who under Egyptian law are in charge of the electoral process, had remained in North Sinai to supervise vote counting.

"The Sinai Province", a millitant group in the peninsula which pledged allegiance to Daesh and has been behind repeated deadly attacks on security forces, claimed responsibility in a statement posted on social media.

According to a statement circulating on Twitter, one of the bombers struck the security forces guarding the hotel, while another stormed the hotel with a machine gun before detonating an explosive belt.

The statement could not be independently verified but was similar to previous declarations of responsibility issued by the group, including a claim to have downed the Russian jet that crashed on October 31 in Sinai, killing all 224 passengers and crew.

In May, three Egyptian judges and their driver were slain when gunmen opened fire on their vehicle in al-Arish.

One month later, the State of Sinai published a video online about the attack. It was circulated on social media networks and tagged "extermination of judges."

Also Tuesday, four police conscripts were killed north of al-Arish when an explosive device went off near the truck carrying them, a security official said.

The police truck was searching the area when the explosion occurred, the source said on condition of anonymity.

It was not immediately clear whether the truck attack was connected to the hotel bombing.

Security forces in the largely desert Sinai peninsula have come under repeated attacks from militant groups since the 2011 uprising that toppled the fourth president of Egypt, Hosny Mubarak.

The violence has mostly occurred in northern Sinai, prompting authorities to set up a kilometre-deep buffer zone there along the Gaza border.
RELATED TOPICS