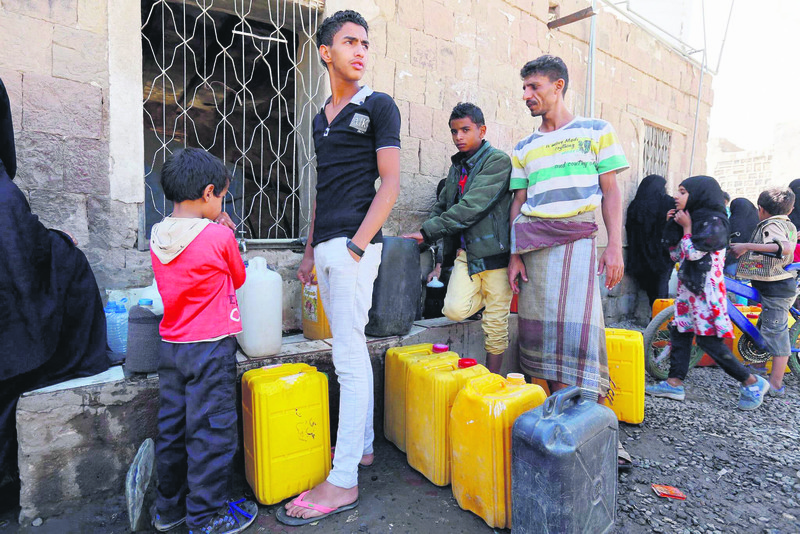 United Nations officials accused Iranian-backed Houthi rebels of blocking the delivery of aid to civilians who are trapped between rebels, government troops and Saudi-led coalition attacks in Taiz as fierce clashes continue across the country

A senior United Nations official has accused Yemen's dominant Iranian-backed Houthi group of obstructing the delivery of humanitarian supplies to civilians in Taiz and warned that up to 200,000 people are living under "virtual siege" in the city. The U.N. Under-Secretary for Humanitarian Affairs and Emergency Relief Coordinator Stephen O'Brien, said months of fighting has left some 200,000 civilians in a virtual state of siege in need of drinking water, medical treatments and other life-saving assistance and protection. "Al-Houthi and popular committees are blocking supply routes and continue to obstruct the delivery of urgently needed humanitarian aid and supplies into Taiz City," O'Brien said in a statement issued in New York on Tuesday. "Despite repeated attempts by U.N. agencies and our humanitarian partners to negotiate access and reach people, our trucks have remained stuck at checkpoints and only very limited assistance has been allowed in," he added.

At least 5,700 people have been killed in the conflict, which began after the Iran-allied Houthis advanced on the southern port city of Aden in March and forced the President Abd-Rabbu Mansour Hadi into exile, drawing in an Arab coalition led by Saudi Arabia.

The Saudi-led coalition has made some gains against the Houthis, but the advance had been very slow. The Yemeni government-run sabanew.net news agency said Hadi, who is now in the southern port city of Aden, toured the frontline on Tuesday and visited the al-Anad base, where Yemeni government forces and Arab allies are stationed. O'Brien said hospitals which are still functioning in Taiz, one of the biggest cities in Yemen, were overwhelmed with wounded patients and faced severe shortages of doctors and nurses, essential medicines and fuel. He cited reports that aid supplies destined for the city had been diverted away from the people it was intended for. "This is unacceptable. I call on all parties to work with the United Nations and other neutral and impartial organizations to urgently facilitate the delivery of life-saving assistance and protection to civilians and the safe and unhindered access of humanitarian workers to Taiz City, without further delay," he said.

Iranian-backed rebels in Yemen have blown up several bridges in the mountainous southwestern Taiz province to hamper the advance of pro-government forces, military sources said Tuesday. Taiz is seen as crucial for the recapture of other central provinces and for opening the way to the rebel-controlled capital Sanaa farther north. It is also important for securing the south, where loyalists have retaken five provinces since July, including Aden, seat of the provisional government.

The Shiite Houthi rebels on Monday "blew up several bridges leading to Rahida to prevent the advance" of loyalist forces, said one of the sources in a reference to the province's second-largest city. Military officials said this week that landmines planted by the rebels have already been hampering the progress of government forces and had caused casualties. Loyalist forces are now stationed 12 kilometres (seven miles) away from Rahida after they regained several positions in clashes that lasted until early Tuesday and left five rebels and two pro-government fighters dead, according to the military sources. Elsewhere, the rebels said they repelled a loyalist advance in Dhubab region on the Red Sea, killing 20 and wounding another 20, a toll that could not be independently confirmed.

The United Nations says a total of more than 5,700 people have been killed in Yemen since the Saudi-led intervention began in March, nearly half of them civilians.

Yemen is suffering from a growing refugee crisis, hosting over 1 million refugees and migrants coming mostly from conflict-hit areas in Africa. There are around 250,000 refugees and 10,000 asylum seekers from Ethiopia, Somalia and Syria, according to the U.N. refugee agency. In addition, the deepening insecurity and violence have contributed to the internal displacement of many Yemenis. There are at least 330,000 internally displaced people (IDP) residing within the country, according to the U.N. figures released in July 2014. Since then, the numbers of new arrivals to Yemen's coast steadily grew as September 2014 became the largest single month on record with 12,768 new arrivals. Millions of Yemenis have also become refugee due to the ongoing war.
RELATED TOPICS