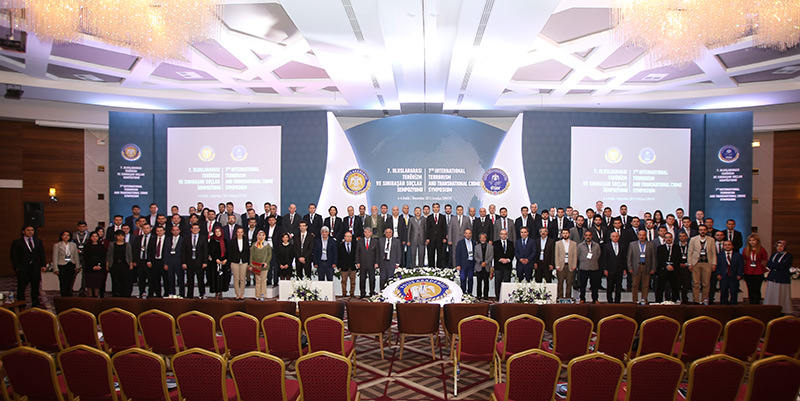 by Merve Aydoğan Dec 07, 2015 12:00 am
With the ongoing instability in the Middle East and the rising number of deadly terror attacks throughout the world carried out by terrorist organizations like DAESH and the PKK, more than 30 prominent figures including academicians, journalists and bureaucrats from Turkey and several other countries discussed global insecurity and regional geopolitics during the seventh annual International Terrorism and Transitional Crimes Symposium held between Dec. 3 and Dec. 6 in Antalya. The symposium was organized by the International Center for Terrorism and Security Studies (UTGAM) and included eight sessions. Each session featured a different topic and discussions led by several academics and journalists specializing in the particular issue. The symposium commenced with opening remarks made by UTGAM Director Necati Anaz, and continued with ones made by the deputy chairman of the Turkish Police Academy, Osman Köse. The chairman urged academicians to have their presentations documented and published for everyone. Continuing on with his opening remarks, Dr. Colin Flint from Utah State University discussed the challenges that academicians face, underlining that scholarship often fails to reach the non-academic world.

During the three-day long symposium, participants from several countries including Turkey, Tunisia, Bangladesh, the U.S., the U.K, Kosovo and Bosnia-Herzegovina had the opportunity to offer their take on the current debates regarding the conflicts in the region. The first session, "Today's Charting Security," was headed by Professor Imtiaz Ahmed from Dhaka University. Professor Ahmed contended that there has been no tectonic shift in terrorism due to suicide bombers. Responding to Ahmed's remarks, Dr. Birol Akgün, the director of the Institute of Strategic Thinking (SDE), said that proxy wars have become more prevalent as of late.

The second session of the symposium attracted great interest from all audience members and focused on global geopolitics. Dr. Dalia Ghanem-Yazbeck, a research analyst at the Carnegie Middle East Center, identified principal reasons for individuals join terrorist organizations like DAESH, citing low economic status and desire for revenge as the leading reasons. The final session of the first day was the "Middle East in Flux." In this session, Dr. Vügar Imanbeyli from Istanbul Şehir University stated that following Russia's recent economic problems, it has reared its ugly head once more by taking a risky political gambit in Syria, adding that the Russian president will face increasing domestic pressure as time goes on. Further commenting on the Middle East, Ezzedine Abdelmoula from the Al Jazeera Center for Studies said that Egypt's election in 2013 was a democratic success and the transition process was going well until the military coup. Abdelmoula said that despite the unsuccessful discussions regarding the Arab Spring, every revolution has a counter-revolution.

Meanwhile, in some sessions, the speakers offered more theoretical perspectives toward the subjects and definitions of states and the search for a new public order in the region. In this regard, the second day of the symposium began by discussing DAESH and foreign fighters. Ceren Yazgan, the deputy director general for security and intelligence affairs at the Turkish Foreign Ministry, revealed the number of foreign fighters that Turkey has identified and underlined that the international community is not sharing enough intelligence. Another participant at the session was Skender Perteshi from the Kosovo Center for Security Studies. Perteshi said Kosovo and other Balkan countries are more vulnerable to being penetrated by these radical groups. He urged policy makers to combat radicalizing ideologies, which he labels as the root of terrorism, rather than combating individual terrorists. The symposium also addressed topics such as the peace process, Islamophobia and counter-radicalization as well as the influence of media and terror. The symposium concluded with a session on security and geopolitics.
Last Update: Dec 07, 2015 1:37 pm
RELATED TOPICS