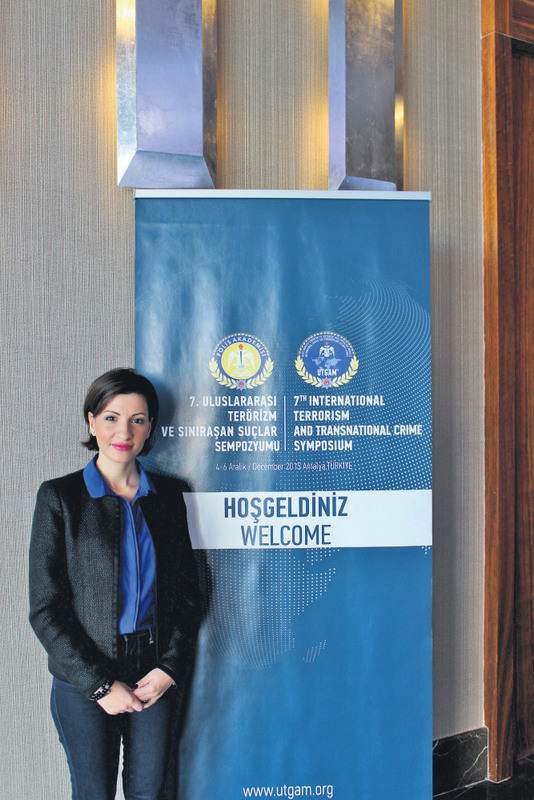 In an interview with Daily Sabah, Dalia Ghanem-Yazbeck, who specializes in radicalization and the process of joining extremist groups, said military operations will ultimately not end terror, she explained how the West's discriminatory policies pave the way for radicalization

At a symposium in Antalya over the weekend, organized by the International Center for Terrorism and Security Studies (UTGAM), several academics, politicians and journalists discussed the security issues and geopolitics in the Middle East. After her presentation, Dr. Dalia Ghanem-Yazbeck, who is a research analyst at Carnegie Middle East in Beirut, gave an interview to Daily Sabah about the foreign fighters who join DAESH and other extremist groups. She explained which motivations exist inside the thousands of people who go to Syria - considered one of the most dangerous countries on earth - to become a militant. She underlined socio-economic, psychological and ideological reasons and stressed that the military operations, carried out by the U.S.-led anti-DAESH coalition will not be a solution to end the terror in the region, as DAESH and other extremist groups use ideological tools and the West's mistakes to recruit people.

Daily Sabah: What are the main motivations behind the radicalization of foreign fighters who join DAESH and other extremist groups?

Dalia Ghanem-Yazbeck: There are several reasons. One of the most mentioned motivations is religion. However, I don't believe it is the strongest one, as we can't know to what extent these people are religious or religiously motivated. This kind of motivation has less to do with radicalization because many of the militants do not know what the Quran says. The radicalized people rely on the knowledge that comes from others i.e. the mentors.

I would say that the main driver is ideology. DAESH uses the ideology of Salafism, which involves a vigorous reading of the scripture. The ideology of DAESH lies on four criteria. The first one is dichotomy. It says, "there are we and they, only." The ideology does not accept anyone being in between. The second criterion is the "threat." The ideology says, "if we do not kill them, they will kill us." The third one is "hate." The ideology uses hate to animalize the other. As a result, a member of this kind of group does not see the other as a human, the other being anyone who disagrees with the extremists. DAESH leader Abu Bakr Al-Baghdadi said in one of his speeches that "you are either with us or with them." Therefore the other could be a Sunni Muslim who is not Muslim enough, according to the group, or a Shiite or Western. The fourth motive is the psychological one. DAESH uses the traumas that people have experienced as a tool for recruitment. When a young French person, living in a suburb watching videos on YouTube and following DAESH members on Twitter or on Facebook, sees that the Muslim community, the "ummah", is oppressed by the West and that babies are killed every day. First, the group identifies the victim. And secondly, the group convinces people that these people are victims. Finally, DAESH gives the young Frenchman the idea that he can change the situation. DAESH makes people believe that going, or making "hijrah," to DAESH-held territories and fighting for the Caliphate is the solution. What it offers as an alternative is performing attacks on your own soil. Several attackers, including the Paris attackers, were examples of that offer. DAESH claims through its propaganda that the West and all the Arab states that are considered impious and apostates threaten Muslims.

DS: How does the radicalization process work and why do people become DAESH fighters?

DS: It was reported that the Paris attackers owned a bar in Belgium and their friends said they were drinking alcohol and smoking marijuana. Do non-religious people who feel they are discriminated against by society and the state join extremist groups more than religious people?

It is hard to profile the terrorist mind. But, I can say that the attackers would likely have been hiding themselves for having such a lifestyle. Because, in several publications, DAESH has told its militants in Europe to not raise suspicion within society, their neighborhood or family. So it could be a tactic. Since the beginning of the emergence of DAESH, several research papers were conducted on the radicalization process. In France, several reports said that stopping smoking, listening to music, or changing the way they dress etc. would be the first signs of radicalization.

DS: Do you think there are similarities between foreign and local fighters? Do the locals, like Iraqis or Syrians, also undergo a radicalization process?

Locals have different motivations. Imagine a Syrian living in Syria whose town was captured by DAESH. A Syrian in this situation has three choices, which are leaving, being killed or following the group. This is called engagement by involvement. Self-reinforcement emerges, since the violence of the Bashar Assad regime is creating legitimacy for DAESH. These people feel they have to be protected and get revenge and they go to DAESH to be protected and fight against the regime.

Another motivation for the locals is money because their cities have surrendered. In those cities, there is no state activity, no economic activity. DAESH tells the locals "we will give you a weapon, a house, a car and $400 a month." It is a substantial amount of money. Female fighters earn between $200 and $250.

DS: Do you think the so-called discriminatory policies by the West affect the radicalization process?

Yes. If you look at the profiles of the attackers in Paris and Charlie Hebdo you can see similarities. The first one is self-seeking. The young people look for places where they feel they belong. The chances of being a respected person within European society have been hindered. They feel that their lives are purposeless. DAESH gives them a positive image of themselves and saves them from being ordinary or useless people. DAESH propagandizes that they will become a fighter of Allah.

Moreover, policy makers, politicians and even French President Francois Hollande said that the punishment for the radicalized people will be the cancellation of their citizenship. This is a mistake. This provides DAESH with another justification and recruitment tool.

DS: A coalition, led by the U.S., has been bombing Syria and Iraq for more than a year. Do you think this is a solution to end terror and DAESH?

No, it is not. Since the very beginning of the establishment of the coalition as such, I said that this will not be a solution. Even if ground troops are sent, it will not work. First of all, the international community has to find a solution for the Syrian problem. The real solution would be that DAESH can destroy DAESH. In Algeria, the Armed Islamic Group (GIA) was destroyed by itself. This kind of closed organization develops paranoia after a while. This paranoia led them to overestimate their capabilities. They started making military mistakes. Secondly, as the group developed a high sense of purity and wanted to not be contaminated by others, they started to kill their own people with accusations of espionage, treachery etc. These purges eventually led to more defection and to people questioning the legitimacy of the group. I believe that DAESH can kill DAESH. However, it is a matter of time. At the same time, we have to work to prevent people from joining DAESH through offering alternatives and better choices. We have to show the radicalized, or the people who have the potential to be radicalized, so that they can live as a respectable person within society. Another important thing is that a counter-narrative must be developed against DAESH propaganda. There are official de-radicalization attempts but the officials have no legitimacy in the eyes of those people. It would be better if former militants can talk to those people and share their experiences. Also imams and other Islamic scholars can help the process.
RELATED TOPICS