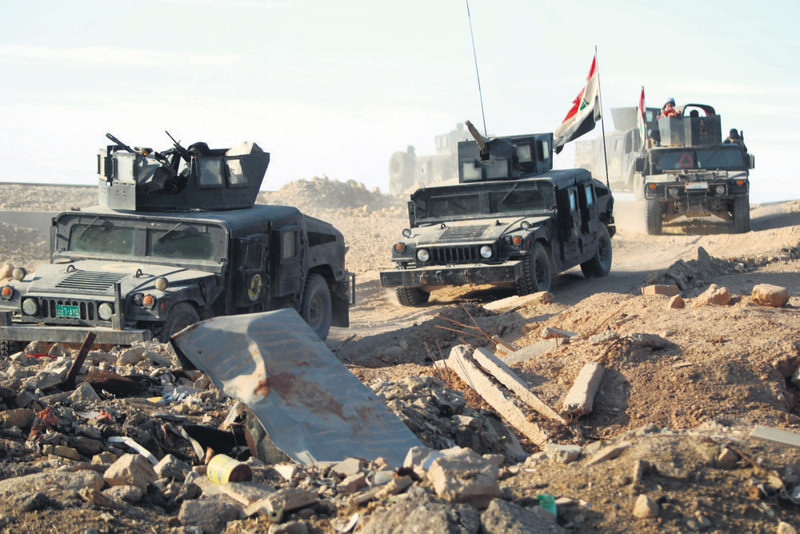 Iraqi counter-terrorism forces drive in the Tameem district of Ramadi, a large city on the Euphrates 100 kilometers west of Baghdad on Dec. 9.
by Associated Press Dec 11, 2015 12:00 am

After the Iraqi army began to move on the DAESH-held city of Ramadi, the U.S. said it is ready to deploy attack helicopters to support the Iraqi offensive to retake the city. However, Defense Secretary Ashton Carter said that ‘there is still tough fighting ahead.'

In a steady escalation of the fight against DAESH militants, the U.S. military stands ready to send more American personnel and attack helicopters to Iraq, especially to help retake a key city seized by the extremists, Defense Secretary Ash Carter said Wednesday.

In recent days, Iraqi forces advanced on Ramadi, the provincial capital of Anbar province, retaking a military operations center and a neighborhood on the outskirts of the city in western Iraq. "The United States is prepared to assist the Iraqi army with additional unique capabilities to help them finish the job, including attack helicopters and accompanying advisers" if circumstances dictate the extra assistance, and if requested by Iraqi Prime Minister Haider al-Abadi, Carter told the Senate Armed Services Committee.

Carter outlined the steps as the Obama administration faces criticism from both Republicans and Democrats about its strategy to defeat the DAESH militants, reflecting a nation's growing fears about the threat of terrorism. It was the first time that Carter has testified before the committee since DAESH claimed responsibility for bombing a Russian airliner, attacks in Beirut and Paris, and the deadly shooting in San Bernardino, California, by a self-radicalized couple.

Carter said that during the past several months, the U.S.-led coalition fighting DAESH in Iraq and Syria has provided specialized training and equipment, including combat engineering assistance such as bulldozing, and munitions such as AT-4 shoulder-fired missiles to stop truck bombs, to the Iraqi army and counter-terrorism service units entering Ramadi neighborhoods from multiple directions. He predicted tough fighting ahead, but said the Iraqi forces have shown resilience when faced with counter-attacks from DAESH. Sen. John McCain, R-Arizona, chairman of the committee, advocated for more U.S. troops to be sent to stem DAESH momentum. "There are 20,000 to 30,000 of them. They are not giants. Somebody is going to have to convince me that air power alone" is going to do the job, McCain said. McCain acknowledged tactical progress, but said "we are not winning this war" and "time is not on our side."

At the current pace, he said U.S. commanders estimate that DAESH will still control Mosul in Iraq at the end of next year. In Syria, DAESH will not be destroyed until Raqqa, the capital of their so-called caliphate, is recaptured, he said. "But there's still no ground force that is both willing and able to retake Raqqa, nor is there a realistic prospect of one emerging soon," McCain said.

Air Force Gen. Paul Selva, vice chairman of the Joint Chiefs of Staff, said the U.S. is not sure if Syrian democratic forces and their Kurdish partners are a big enough force to hold Raqqa if it were retaken. He said the U.S. hopes that U.S. Special Operations forces will be able to generate ground intelligence to surmise which forces are available to hold Raqqa. He said that if Ramadi is retaken, the Iraqi government expects a predominantly Sunni police force to work to hold the area.

Carter defended the administration's decision not to deploy a heavy U.S. ground force to drive DAESH from Syrian and Iraqi territory. "In the near-term, it would be a significant undertaking that, realistically, we would embark upon largely by ourselves; and it would be ceding our comparative advantage of special forces, mobility, and firepower instead fighting on the enemy's terms," Carter said. "In the medium-term, by seeming to Americanize the conflicts in Iraq and Syria, we could well turn those fighting DAESH or inclined to resist their rule into fighting us instead." But he said that in the long term, the U.S. would be faced with the problem of securing and governing the territory retaken something that needs to be done by local forces.

Sen. Tim Kaine, D-Virginia, used the hearing to call on Congress to pass new war powers for the fight against DAESH. The administration is relying on authorizations for using U.S. military force that were approved after 9/11. Kaine lamented that Congress has declined to take up the issue in the 16 months the U.S. has been fighting DAESH.

Sen. Lindsey Graham, R-South Carolina, who is running for the Republican presidential nomination, sought to drum up support for a new authorization that would not place limits on where, how long or in what ways the U.S. could fight DAESH. Carter seemed to agree with a more open-ended authorization with no geographical limits, for instance, but hedged his answer as to not contradict his own statements in support of an authorization for new war powers that President Barack Obama has sent to Congress in February one that included some limits on taking the fight to DAESH.

Republican presidential candidate Ted Cruz, one of the fiercest critics of Obama's strategy to fight the militants, missed the hearing with Carter. An aide to the Texas senator, a member of the committee, said he was in New York for fundraising and media interviews. On the other side of the Capitol, the House Foreign Affairs Committee passed, by voice vote, a measure calling for the U.S. to cut through bureaucracy within the Iraqi government in Baghdad and get arms, training and medicine directly to Kurdish forces fighting DAESH. On Tuesday, a group of prominent Iraqi exiles, which is making a renewed push to unify the country's disaffected Sunni Arab minority into a cohesive political coalition, wrote Rep. Ed Royce, R-California, chairman of the House committee. Citing distrust of the Shia-led Iraqi government, they urged the committee to consider a similar measure that would expedite the provision of U.S. equipment and training directly to Sunni forces willing to fight DAESH.
Last Update: Dec 11, 2015 1:01 am
RELATED TOPICS